Brief Synopsis:
This is a Matrix sequels edit like you've never seen before. "The Matrix Revolutions Decoded" presents a complete and focused narrative executed in the same run time as the original "Matrix" while unveiling a brand new and more satisfying conclusion to the Matrix saga. Over 2 hours have been removed from the original source material without logical gaps or jump cuts.

Decoded 2.0 released August 2016 creates an improved ending as well as a quick trip to Zion to explain many points that were left out of the original Decoded.

This edit completely replaces 2013's 'The Matrix Revolutions Reprogrammed'.
Intention:
I'll always feel like the storyline of The Matrix sequels was poorly told, but I am convinced that these movies did in fact have a strong story hidden underneath. Themes of control, power, science, faith, purpose vs programming, man vs machine, choice vs causality all resonate strongly in sequels to "The Matrix" but are unfortunately lost among a sea of unnecessary sequences, silly movie twists, and psuedoscience.
Special Thanks:
Fanedit.org - Everyone who kindly provided constructive criticism and reviews of my initial release!
Release Information:
Editing Details:
Sony Vegas
Sony Architect
Sony Soundforge
V.I. Suite
Handbrake
MeGUI

Opening of the movie following title sequence picks up immediately after "The Animatrix: The Last Transmission of the Osiris" ends using live action scenes from the "Enter the Matrix" video game. All added scene from "Enter the Matrix" have been upconverted to 1080p, color corrected, sharpened, and had a custom 5.1 surround sound mix added.

Neo's dream of Trinity dying has been removed

Removed scenes of Morpheus, Link, Neo, and Trinity on the Neb at the beginning of the film

Neo no longer visits the home of The Oracle

Much of the footage from Zion has been removed, a quick introduction is given to the important characters. There is no rave scene, no Bane subplot, etc.

Neo and Sereph's fight has been removed

Neo and The Oracle's conversation is altered to remove his concerns about Trinity and to add an overall concern about what he's supposed to do next. The theme of "difference between knowing the path and walking the path" has been emphasized in this edit to better match the original Matrix

The burly brawl has been shortened in several places for pacing

The Merovingian doesn't tout the virtues of the French

Much of The Merovingian's speech has been reduced for pacing

Many cuts have been to the highway chase for pacing

The tower to the source sequence has been dramatically changed, no Smith, no Trinity entering The Matrix, no bomb, no rooftop save, the meeting with the Architect is heavily reworked as well as the Architects motivations. and Neo's reaction to them. Some new visual fx work makes some of these cuts possible.

Neo doesn't have to save the crew from the sentinels, he has no power over machines in the outside world in this edit

The next several scenes play out completely differently in this edit. The first hour of The Matrix Revolutions is completely removed

Revolutions scenes that show the train station, The Merovingian, The Oracle, Satii, etc have all been removed completely and you'd never miss them

Scenes are completely restructured so that the Hammer crew, the Logos crew, and the Neb crew can all regroup quickly after the Neb is destroyed

The prophecy is a lie conversation has been moved here

Neo has a vision of Smith assimilating the Oracle and taking over The Matrix, this is his reason for going to the machine city in this edit

Gloria Foster is restored briefly from "The Matrix" so that Smith can assimilate her. This edit was inspired by "The Matrix Hacked Reloaded". Mary Alice's face is not seen in this edit. This scene has been recolored to better match the coloring of Reloaded and Revolutions

Bane has been completely removed

Countless edits were made to the battle for Zion including but not limited to: all scenes with Zee and most of the infantry have been removed, Captain Mifune saves the day and opens the gate instead of Kid, action has been kept tight and intense, the battle quickly gets out of hand for humanity. This is my favorite sequence of edits and I hope you enjoy it!

Removed Councilor Hamann's reference to Niobe speaking to The Oracle

Cut several scenes building up hopelessness for the finale.

Neo and Trinity's flight to the machine city has been completely reworked, this is where Neo gets his eye injury in this edit. Most of the instances in which Neo is seen wearning eye bandages have been removed or replaced of shots from earlier in the movie.

The cut on Trinity's neck has been recolored to look like a smudge or a piece of her hair.

Neo doesn't instruct Trinity how to restart The Logos

Several cuts made to the final Smith Neo battle. In my edit Neo wins out of his sheer force of will not to give up. He chooses to keep getting up and fighting which infuriates Smith into making his final mistake. Additional edits have been made to reduce unnecessary air flipping and silly effects

The ending is completely reworked, a montage of scenes roll behind the credits. Closure for Morpheus, Niobe, The Architect, Trinity, Zion celebrates.

Trinity recovers Neo's body as her final act of love for him.
Cover art by henzINNIT (DOWNLOAD HERE) 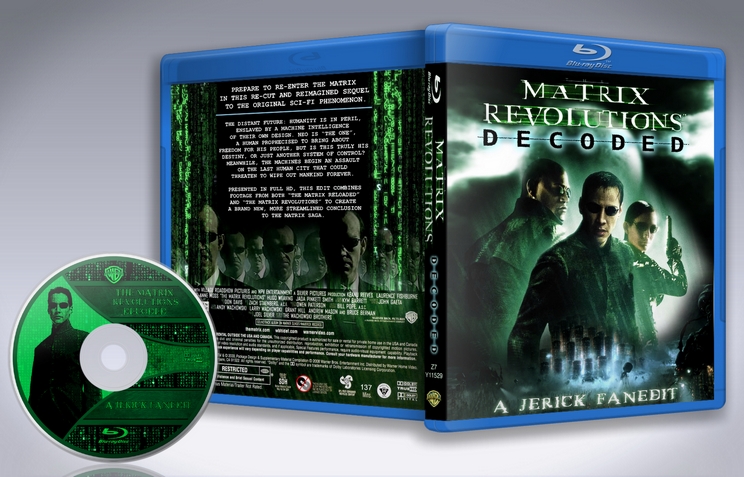 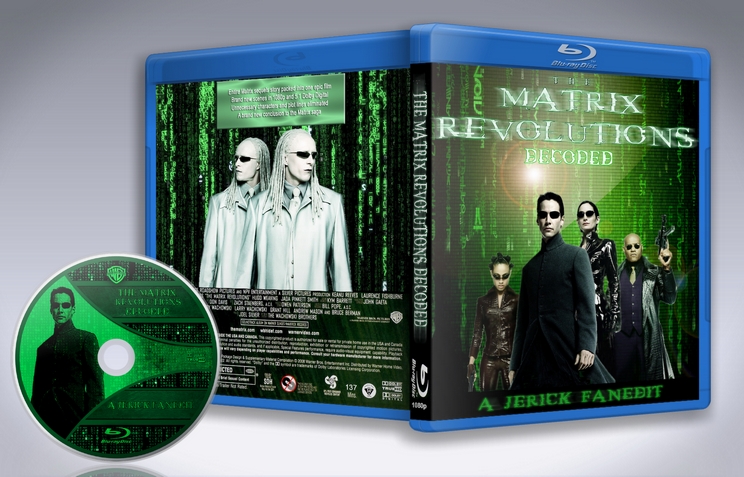 Overall, I would say this does the best job of cutting out so much fat and condensing it into a 2 and a half hour run time that feels much more faster paced but also not overly philosophical that drags on and makes the experience boring. It gets to the point real quickly. I love how the Rave scene was spliced in the end credits for it to be a celebration of Zion being saved instead of it being this random scene in the second film. Great job of having the credits roll on top of the scenes. Only complaint I would really have is towards the end, Trinity being cut to be alive feels a tad jarring. Some of the shots used to keep showing her alive feel a bit weird if that makes any sense. Otherwise, this is a great edit of the sequels that I would highly recommend to watch over the original two sequels.

Do you recommend this edit?
Yes
Format Watched?
Digital
V
versingthegamez Top 500 Reviewer 5 reviews
Report this review Comments (0) | Was this review helpful? 0 0
June 06, 2021
Overall rating
9.3
Audio/Video Quality
10.0
Visual Editing
10.0
Audio Editing
10.0
Narrative
9.0
Enjoyment
9.0
Recently I decided to rewatch The Matrix and so obviously after that, I wanted to watch Matrix Reloaded and Revolutions but the person I was watching it with wasn't that interested so we compromised and watched The Matrix Revolutions Decoded and it was perfect! It told the story of both of the movies without the all the confusing convoluted-ness that the sequels are rife with.

My favorite change was the shortening of the incredibly long car chase. It actually made it really fun. My biggest problem was the removal of the train station sequences. I feel like those were a little too important to cut.

Do you recommend this edit?
Yes
Format Watched?
Digital
G
gleem Top 1000 Reviewer 1 reviews
Report this review Comments (0) | Was this review helpful? 1 0
April 10, 2021
Overall rating
9.8
Audio/Video Quality
10.0
Visual Editing
10.0
Audio Editing
10.0
Narrative
9.0
Enjoyment
10.0
Decoded by Jerick is the best of the edits I've seen. It keeps enough of the Zion footage to keep the story coherent. It makes some fairly radical story changes at the end. I liked them, but everyone may not. I loved the idea of moving the Zion rave/orgy scene from the first act of the first sequel to the credits scene! That was brilliant and felt very organic. I thought some of the edits and changes in the very end (to hide Neo's blindness, to change Trinity's fate, etc) felt a tiny bit clunky. But still, it ended up much, much tighter than the source material.
I just really enjoyed this edit and think that every Matrix fan should give it a watch.

Do you recommend this edit?
Yes
Format Watched?
Digital
K
kryptonicus Top 500 Reviewer 4 reviews
Report this review Comments (0) | Was this review helpful? 1 0
April 07, 2021
Overall rating
9.8
Audio/Video Quality
10.0
Visual Editing
10.0
Audio Editing
10.0
Narrative
9.0
Enjoyment
10.0
This is my definitive go to matrix sequels from now on, the editing is flawless, the narrative does not have plot holes, no more mountains of expositions, unnecessary subplots. I love this fan edit and reccomend it to everyone.

Do you recommend this edit?
Yes
Format Watched?
Digital
B
brokenskull 1 reviews
Report this review Comments (0) | Was this review helpful? 0 0
November 13, 2020
Overall rating
10.0
Audio/Video Quality
10.0
Visual Editing
10.0
Audio Editing
10.0
Narrative
10.0
Enjoyment
10.0
A wonderful edit from Jerick which combines Matrix 2 & 3 which you would think would be impossible to do and kept the story intact but this edit does it perfectly and keeps some of my favourite scenes in such as the mansion fight, the freeway chase and my favourite scene of all the burly brawl. Jerick removes anything that is useless and doesn't need to be the the movie which helps speed up the pace and is now my go to version of the sequels.
Y
youngy94 Top 100 Reviewer 27 reviews
Report this review Comments (0) | Was this review helpful? 0 0
View all user reviews