Brief Synopsis:
'John Wick: Point Blank Cut' is black & white with new simple credits for a more classic "timeless" feel. Every bit of dialogue that wasn't needed to advance the plot and inform character is gone, so the gaps between the action sequences are minimal. The Perkins/Marcus/Henry subplot is removed from the last act, to stay focused on John. The flashback/forward framing device is gone, it's all linear.


Intention:
The action scenes and fight sequences in John Wick are some of the best ever but there is a lot of moody dialogue scenes between all that action. Don't get me wrong, I enjoy those too but I wanted a cut that focuses in tighter on that brilliant stunt work.


Additional Notes:
This could be put in the FanFix category because I have "fixed" things I didn't like, improved moments where I could and reordered a couple of scenes but I think it fits best as a FanMix. Because I've converted it to noirish B&W just for fun, edited it down to focus strongly on the fights/action to the exclusion of a lot of dialogue, for no other reason than I wanted an alternate way to enjoy the movie (not because it makes it a better movie. It probably makes it worse). A cut for when you've only got an hour 'n' change and just want to more-or-less see the action parts.

A bonus colour version is also available, for those that would rather not watch this in B&W. It's regraded to tone down the green tinting but I wouldn't consider it a complete colour fix.


Special Thanks:
Gaith, thecuddlyninja, Gatos, Hubunkey, JJE-187, ThrowgnCpr, TK251, jswert123456, ssj and especially Plissken1138 (For an edit idea. See cutlist)
Release Information:
Digital
Special Features
1280x532 5.9GB MP4 AC3
(Bonus Colour Version: 1280x532 4.2GB MP4 AC3)
Editing Details:
- Removed any shots and dialogue that weren't needed to get us swiftly to the next action scene (while retaining enough to still tell the story and convey character and emotion)
- Converted to black & white for that "Noir" feel (Just for fun and variety)
- Brightened the look of the film overall, with more contrast and some fim grain
- Removed all of the silly looking pop-video subtitles using a Spanish version of JW, to "paper over" those parts of the frame
- Added my own more classic looking subtitles instead. Some are new and some are re-written
- Replaced all colour credits with simple black-on-white "John Carpenter style" credits of my own
- Removed the Perkins/Marcus subplot. She served no real purpose in the final act and was not involved in any major/exciting action scenes, so now John kills her like everyone else who stands in his way. Henry, her would-be guard is gone too
- Avi is much reduced and I've removed all references to him to not being able to speak Russian. It's a stretch for the number-2 in the Russian mob to not understand anything anybody around him is saying
- Made many small trims of lines and shots I didn't like (Not just to save time) 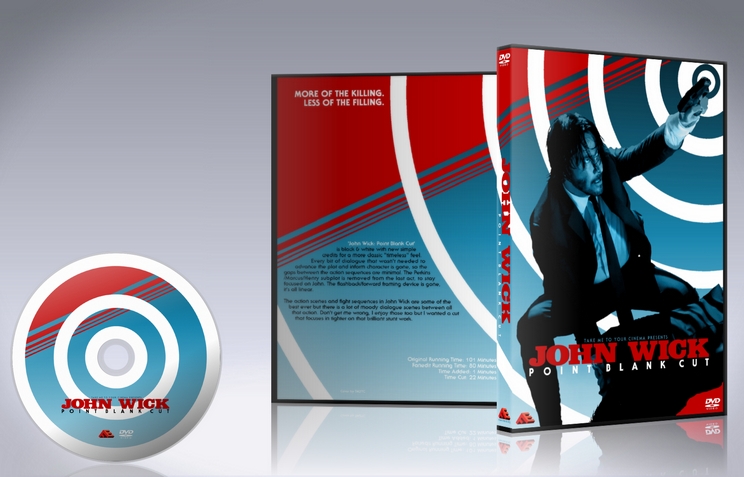 Audio/Video Quality: I quite enjoyed the visuals in noir but gained more satisfaction in color due to the difference in audio intensity. Actions should've been more clearer when a film is in noir to express the intensity and varying levels of expression, a few scenes drowned this out with the background music blaring, in color though, this was justified and snug quite perfectly.

Visual Editing: The in-between cuts were fantastic and the bullet-time scene in the Red Circle stood out magnificently!

Audio Editing: As with my comment above regarding the action/movement intensity.

Narrative: This is now the go-to cut for the original, the centrism on John was seamless, fast, and what can I say "point-blank".

Enjoyment: I love this cut, the overall quality astounds me in every turn, I don't even mind what we're cut anymore as they've now settled-in as padding to an otherwise great movie!

Do you recommend this edit?
Yes
Format Watched?
Digital
V
vhestal Top 500 Reviewer 6 reviews
Report this review Comments (0) | Was this review helpful? 0 0
May 02, 2021
Overall rating
10.0
Audio/Video Quality
10.0
Visual Editing
10.0
Audio Editing
10.0
Narrative
10.0
Enjoyment
10.0
There's not much to say, John Wick with it's incredible action, less dialogue, a gritty noir B&W colour grade and super fast pacing. This edit flies by and I didn't even notice the things that were cut. If you were a fan of the original, you're going to love this one and if you weren't, I'd still give this a watch as it might just change your mind.

Do you recommend this edit?
Yes
Format Watched?
Digital
G
gilhodges Top 100 Reviewer 43 reviews
Report this review Comments (0) | Was this review helpful? 0 0
August 17, 2020 (Updated: August 17, 2020)
Overall rating
9.3
Audio/Video Quality
6.0
Visual Editing
10.0
Audio Editing
9.0
Narrative
9.0
Enjoyment
10.0
To sell this edit quick, it´s fantastic.
Unnecessary and silly scenes cut to improve the pacing even more. It´s a joy to watch this and i like it more than the theatrical cut.
What doesn´t work in my opinion, is the scene after the funeral where he takes his ride to the airplane field and than cut to him being home again, due to the difference in clothes he is wearing.
The b&w approach is very interesting, adds some gritty feeling to the movie, although it is not perfect (how could it be, if the movie wasn´t shot in chroma/b&w).
The thing that bothers me, is the grain (added or due to compression?) to the movie, independent if its in color or b&w. It is too strong, would´ve loved an minimalistic approach.
Also there is only the ac3 track, which is a bit disappointing.