One new edit this week: 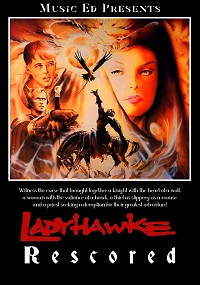 “Ladyhawke has had a reputation of having mix feelings on the soundtrack. The general consensus is that the 80’s Alan Parsons/Scott Powell soundtrack just hasn’t aged well. Using the work of Jerry Goldsmith from the little known film “Lionheart”, I have rescored probably about 95% of Ladyhawke using this timeless medieval fantasy score.”