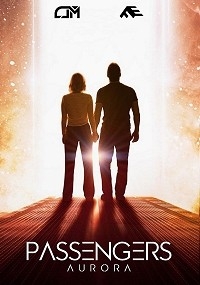 Join the Forum Discussion
Awards:
Favorite Edit of the Month Winner
Tweet
Brief Synopsis:
The original release is a pretty boring movie, we follow Chris Pratt's character, Jim, throughout the film, and see his personal struggles with his fate, and his relationship with Jennifer Lawrence's character, Aurora, flourish. If you've seen the movie then you know the plot, but, if you haven't, then that's all I can really tell you without ruining it.

Essentially what this edit does is rearrange the movie to follow Aurora, which makes for a much more interesting viewing experience - activating the psychological elements that the original film set up.
Intention:
To make for a much more thrilling and interesting experience by viewing the film through the lens of Aurora, instead of Jim. This gives us a movie that doesn't try to rationalize Jim's actions for the entirety of the first act, but actually makes him a DEEPER character by giving him less exposition, and somewhat sparks the psychological elements the first film attempted to have.

Special Thanks:
TM2YC for reviewing this edit so promptly. SonofSinbad and HALS for their feedback.
Release Information
MP4/M4V/MOV
Cuts and Additions:
Cards:
- FE Warning
- FE.org new Netflix style Bumper
- My logo bumper
Opening shots
- Same opening shot, with Aurora added under Passengers in matching style
- Rearranged/removed various shots
- Cropped some establishing shots to get rid of cheesy location info
Aurora/Jim
- Starts with pods opening 'simultaneously'
- Jim walks around alone for a bit before running into Aurora
- Movie pretty much carries out as normal until the "reveal"
The "Reveal"
- Spliced in 'flashbacks' of Jim's year alone with Aurora's 'freakout'
- Adds to the tension/sympathy to Aurora as opposed to Jim
- I chose clips that make him seem more insane/broken than sympathetic
Third Act
- Laurence Fishburne unfortunately gets even less screen-time in this edit.
- Really didn't cut that much, just some unnecessary shots and some dialogue changes
- Got rid of many 'cheesy' lines/tropes
Credits
- Replaced Levitate by Imagine Dragons with an infinitely more fitting Across the Universe by The Beatles
- Again added Aurora under Passengers in matching style.
- Logo cards to fill the blackness as the song fades

I liked the Theatrical Cut, but something felt off about it. I was not the only one, as it seems, and some very creative people suggested this well deserved and logical flip in perspective (e.g., https://www.youtube.com/watch?v=Gksxu-yeWcU). I was curious to see how the movie actually feels now, and the answer is simple - Macmilln's Aurora Edit is a significant improvement over the TC. Highly recommended!

The edit is visually stunning, and I simply loved it. The characters felt more relatable, the reveal a lot more satisfying, and the narrative flows more sensibly. Well done! Definitely my go-to version of this film.

When I first watched the original movie i left the theater wondering if the movie would be better if it was from Aurora’s perspective. Then I forgot about the movie and then this shows up. And this is clearly better! It is seamless and thrilling!
Excellent quality and editing. I can’t compare in detail with the original because I did not remember everything. But it felt right, if I can say that.
Will be showing this to someone that hasn’t seen the original and discuss the narrative. And perhaps I will update my review.

If you're going to watch Passengers, watch this version. It's a lot closer to what I was expecting going into the original film. My only real issue is that the original movie was basically 3 different movies strung together and this edit cuts it down to 2 movies strung together. The idea of having the story center around Aurora from the beginning is excellent. The problem is just that the first half of the movie feels irrelevant once the second half starts. Maybe that's the intention of the original film? I don't know. But I feel like the first half of this movie (or specifically this edit) would work best as like an episode of Black Mirror. Trimmed down to 45-60min. Either the whole movie should expand on the idea of the first half or the whole movie should expand on the second half. They're just far too different to be in the same movie.

So while one of my main issues still remains, this masterful edit is the version I would show somebody who's interested in watching the movie.

I watched this fanedit just like I would watch any movie, because that's what I think a fanedit should be.
First off let me say thank you, macmilln, for the hard work and the great idea. I rarely ever watch a fanedit these days, but this one seemed very promising to give "Passengers" another go. I was truly thrilled to watch this version.
I kinda liked the original for its premisis and the look of it, but unfortunately it was also a bit boring, long and very predictable. Also I am not much a fan of Chris Pratt's nice guy acting.

About my review:
I name it as I see it. It's my personal opinion. As an approach I start with the quibbles and work to the things I enjoyed, so the final impression hopefully is a positive one. And since it is one of my favorite movies I do it with "the good the bad and the ugly" as main topics.

The Ugly
Lots of little stutters in the scenes with moving cameras, especially wide shots, which I would not expect in an almost 6GB mp4 file. The fanedit titles and the additions of fanedited by in the beginning and the end all came with visible stutters and made them feel out of place, although the image quality was perfect.

The Bad
The beginning felt rushed to me. I had difficulties getting in the rhythm of the movie. I know it is intentional that I do not know what happened before and how I got there and am put in the middle of a scene (like in Solaris), but I would have liked it to get a little more time before the meeting of Pratt Lawrence.
There was a shot of the clean hallway in front of the control room. At the time Aurora wakes up, this should be messed up. If that was intended to be a flashback into Jim's memory it did not work for me. Perhaps this was only a quibble, because I know the original, but I cannot take that knowledge back as someone who knows and owns the original.
The flashbacks were not always working for me and at times took me out of the movie watching experience. I could have lived with less.
I was hoping for more "bad" for Jim's character and for more of a horror scenario. But that's probably just because I was teased by Nerdwriter's "Passengers Rearranged" on youtube, which is not the same as this fanedit. But it made me look for this one here.
The revelation scene by Arthur is a difficult one, because the audience does not know about the relationship between Jim and Arthur at that time.

The Good
This is a vast improvement over the original. It is so much more interesting and thrilling. The change to the atmosphere is significant, especially because you managed to successfully add an elemnt of surprise and not knowing what comes next. This was masterfully done and I had fun watching this. It still isn't a great movie, but it is so much better. Thank you for making it and showing us the power of the fanedit and why it is so important to make them and share them. Truly a great achievement.
I liked the characters a lot more in this than in the original.
The audio editing was awesome.
The video editing was great, no visible cuts.

First of all: I’m honoured that your first activity the forums in ~4 years was to watch/review my edit! And just thanks for leaving a review, as there’s lots who don’t.

I can agree and understand everything you said about the edit, besides the technical issues you mentioned. I just reviewed the footage on my computer, phone, and TV, and did not notice any of these ‘stuttering’ issues. As for the additional title texts having visual stutters: do you mean how they appear AFTER the main title? Because that was intentional. Or do you mean that there is actually a framerate issue of some kind with them? I’ve noticed what I think you’re talking about in other films, so I’m trying to look for the same in my edit, but I just can’t at all.

I unfortunately don’t have the source files anymore, so the issues you experienced are there to stay, but I’m curious to see what you mean nonetheless.

And as I said for everything else, yeah I can totally get behind/understand all of your critiques, both positive and negative. (When I edited this years ago, I couldn’t find a way to do the full Nerdwriter-inspired ending, maybe at some point in the future I’ll re-re-edit this and try to do so...

I also appreciate that you rate this like a normal film, where it makes sense to do so. I assure you I didn’t take your review as negative overall, because obviously 8+ stars are all amazing (though, comparatively, it may not seem like it ‘round here...)

As someone who didn't mind the theatrical cut, I decided to watch your edit after reading a number of positive reviews and I have to say I'm happy I did as this is a much better movie overall. This wasn't a bad movie in general but the whole Chris Pratt feeling sorry for himself took away from other elements of the movie, you have managed to transform this movie into something great by moving elements of the story around and doing a few tweaks here and there which makes this the superior version to watch.

Do you recommend this edit?
Yes
Format Watched?
MP4/AVI/etc. (HD)
Comments (0)
Was this review helpful to you?
View all user reviews
Fanedit.org does not host, provide links to, or sell fanedits. Do NOT contact us for such things. For more information please read our FAQ.
close
Toogle Down