Brief Synopsis:
After watching Pauley79′s “Trials And Tribble-ations – The Extended Edition”, I wondered just how far I could take what movie editing software I have on my home PC, so that I might start doing some Fanedits of my own.
Intention:
Using Pauley79′s version as a rough guide to my edit, I have made the following changes/additions:

(The CBS & Paramount DVD intros are the only 2 pieces of video I ripped directly from Pauley79′s DVD. All remaining work: edits, blends, etc are entirely ALL my own work.)

The DS9 main title has been moved back to it’s original intended position – the episode still starts with the briefing on the old Enterprise, then jumps forward 95 years to the arrival of Dulmur & Lucsly on DS9, and the subsequent story of how the Defiant was thrown back in time. Then followed by the DS9 titles in the same position that they were originally intended. I felt this was an important change to make – all Star Trek episodes have the episode title immediately following the main title (I think the only exception was Next Generation’s “Descent, Part 1″ that had the episode title before the main title). I did feel on Pauley79′s edit that there was too long of an interval between the main title and the episode title & credits, and it needed to be changed.

Further into the episode when the Klingons arrive, I felt that Pauley79′ss edit somewhat confused continuity a little. In that cut Kirk & Spock find out that the Klingon ship is approaching K7, the red alert is called, we then cut to Sisco & Dax reacting to the alert and entering the turbo lift. You then cut to the bridge scene were Kirk & crew find out the Klingons have already beamed over, during which Chekov exclaims that the Klingon ship is already just sitting there. Then there is Kirk’s Captain’s log, Kirk & Spock beam into the station manager’s office to speak to the Klingons, and then after all that you cut back to Sisco & Dax in the turbo lift with Kira telling them that the Klingons are just arriving and beaming over. I my cut, after Sisco & Dax enter the turbo lift we stay with them while Kira informs them of the situation and they have their little banter about Koloth. Cut to the bridge, Kirk finds out and beams over, and no captain’s log (this is an episode of DS9, so I felt that it shouldn’t contain any of Kirk’s logs), then the meeting with the Klingons. Then cut back to Sisco & Dax leaving the turbo lift, and on with the episode.
Next; when Darvin is revealed as a Klingon near the end of the episode, I have extended this scene a little. After Darvin is revealed, I then cut back to the original episode to the end of that scene so we can see Baris’s reaction to Darvin and then Kirk telling the Klingons to leave. Then right on to the end of the original episode (the only part of my cut where I have used ‘original series’ FX footage – A as an homage, & B it’s about the only piece of FX from the original that can compare to the new FX) and the scene on the bridge, then back to Kira using the orb to get the Defiant back to DS9.

Finally, and as previously mentioned, this is an extended edition of the DS9 episode. That being the case I have left the original DS9 end credits in place.

So those are the main changes that I have made. There are also several other smaller cuts, edits, changes, etc to Pauley79′ss version that are too small to mention.

At this point, I wish to make comments on two items that were pointed out to me on my first attempt to post this:

My edit contains several black-screen transitions. These are commonly used in TV shows (like Star Trek) to denote a change of scene. It has been pointed out to me that the ones I have edited in sometimes make the episode look disjointed. I have only inserted these in places where I tried a blend transition, and it absolutely did not look right.

Secondly. When Odo enters the bar, sits down, and starts scanning, you will notice there is a small skip in picture and sound. This was unavoidable, and in fact was also in Pauley79′s version. I’ll explain: After Kirk & Spock leave the bar area, Chekov & Uhura walk over to the bar. We then cut to Odo entering the room, sitting down, and starts scanning. At this point in the original DS9 footage we see Chekov & Uhura walk past Odo to the bar, which is why he quickly hides his tricorder. But Chekov & Uhura have already walked over to the bar before Odo came in, so this would be an error in continuity. I tried doing it as a blend, but it looked awful. I’m guessing Pauley79 had the same problem. With this small “cut/skip”, it just looks like Odo is hiding his tricorder from a Starfleet officer who walks past him.

In addition, I have edited together a longer trailer for the extended edition; it uses some of the same scenes as Pauley79′s trailer at the start, but a lot of other stuff besides.
Additional Notes:
These changes etc I have made are in no way meant to put down the work that Pauley79 has done on the episode, nor would I expect it to be classed as an improvement of it (perhaps with the exception of some of the main editorial changes I’ve mentioned above). I just wanted to see what I was capable of achieving with the software that I have. It did turn out a lot better than I had expected. I would still be eager to see what Pauley79 does on another edit of this episode, perhaps using footage from the recent enhanced Star Trek episodes. If not for what he has already done, I would never have thought of having ago myself. So many thanks to him for that. As previously mentioned, this, and future DVD releases from me may not be up to usual FE standards. I do also understand that my initial releases may not even make it onto the site itself. Additionally, I know there’ll be people who like this, and those who don’t. So I would ask that you watch this, my firstling FE DVD in full first. Then if you must criticise, I’d appreciate constructive criticism that would explain how to correct any mistakes I've made. Please don’t shoot me down before I’ve had a chance. This is early days for me doing FEs, so it’s a learning process.
Release Information:
Cover art by Merlin (DOWNLOAD HERE) 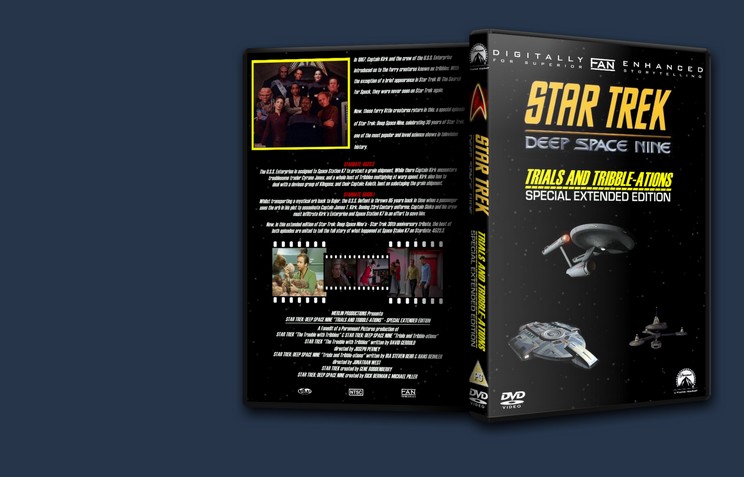 5 reviews
Overall rating
8.4
Audio/Video Quality
8.0(2)
Visual Editing
10.0(1)
Audio Editing
8.0(1)
Narrative
8.0(2)
Enjoyment
8.4(5)
August 17, 2022 (Updated: August 18, 2022)
Overall rating
9.5
Audio/Video Quality
9.0
Visual Editing
10.0
Audio Editing
8.0
Narrative
9.0
Enjoyment
10.0
This is an excellent blending of the two stories. I have done my own edit of this, and I think it is very challenging to favour TOS or DS9 as the angle from which the edit comes from, gelling them together isn't fully doable. This edit is therefore probably the best and only real way that both stories can come together. Specifically, every scene is extracted from both stories chronologically so that we witness events from both stories equally. Kirk's captain's logs are rightfully removed, whilst Sisko's remain because the overall framing is the DS9 flashback storytelling. Whilst the frequent fade outs are a little distracting, because both the audio and visual material from each episode is so different, I do think this was the only way to achieve the intention of the edit. Audio fade in/out from exterior DS9 shots to TOS could be improved, as there are times dialogue is faded in/out, and whilst keeping DS9 music only for the most part works best, transitions to TOS scenes and music could be improved if a new version of the edit was considered. The only thing I would do if I were to do a new edit of this, would be to replace the TOS footage with TOS-R material, probably SD as HD may be too jarring with the DS9 footage. I'd probably change nothing else. The only query I had when watching, was the placement of Sisko meeting Kirk after the Enterprise departs K7. I guess the Defiant could have been shadowing cloaked, but it probably makes more sense for that scene to be pre-departure. But that's just my thought. Overall, a well-constructed edit that enhances the viewing experience of both original episodes. Given the age of the edit, I'm not sure if the editor frequents the forum still; but well done nonetheless!
T
the-warlord Top 500 Reviewer 9 reviews
Report this review Comments (0) | Was this review helpful? 0 0
September 01, 2012
Enjoyment
8.0
November 16, 2008 @ 4:34 am

I am an extended edition buff and have a big collection of original ones and all the fanedits from here.
Many extended editions do not add anything to the movie, just add more useless scenes. I will rate the ones here.
Rating criteria: image quality, sound quality, 3x improvement, overall.
Image Quality: 7 of 10
Sound Quality: 6 of 10
Improvement: 7 of 10
Overall: 7 of 10
C
col-hutty Top 50 Reviewer 70 reviews
Report this review Comments (0) | Was this review helpful? 0 0
September 01, 2012
Enjoyment
8.0
October 24, 2009 @ 8:25 pm

Always good to see more Trek edits around, and this is a fun one, using two of the most loved episodes of Star Trek and DS9. The execution isn’t perfect, but I don’t know that it ever could be, for reasons previosuly explained by others. Still, a great watch. Thanks! :)
R
ripplin Top 50 Reviewer 102 reviews
Report this review Comments (0) | Was this review helpful? 0 0
September 01, 2012
Enjoyment
9.0
December 14, 2009 @ 9:37 pm

I perfer this edit more than Pauley79′s because of the qaulity of the edit. Overall. 9/10. I did find the black screen transitions a little disjointed, but undertsand why they are used.

I agree also, that I found this story much less satisfying than I expected/wanted to. It is NOT because of the edit, just that I can’t reconcile that Sisko is re-telling the events to the temproal agents and not experiencing real-time. How could he possibly know and be able to re-tell what the original crew is doing (except for the parts he/his crew experiences? of course, I guess he could be relating the histroicla account, inter-weaved with his own to the tmeproal agents – but wouldn’t they know the histroical version already?