Brief Synopsis:
This edit removes the art-film pretentiousness from The Greatest Movie Ever Made and turns it into a fun, faster paced sci-fi flick while still retaining what little plot there was to begin with. Kubrick fanboys are advised to stay far, far away.
Intention:
I felt like destroying something beautiful.
Additional Notes:
Plan 2001 From Outer Space is a spectacular movie that grows even more wondrous with each viewing. Adabisi’s masterpiece has awesome scope, touching the limits of interplanetary space and penetrating man’s inner destiny. “A uniquely poetic piece of science-fiction,” raved some nut on teh intarwebs, “hypnotically entertaining; technically and imaginatively it is staggering.” His mom said, “Adabisi’s special effects border on the miraculous – a quantum leap in quality over any sci-fi film ever made.” As producer, director and writer of the screenplay, Adabisi brought complex ideas to the screen with astounding immediacy that won him a much-deserved Fanedit Razzie Award. Moving from the prehistoric birth of intelligence to the emergence of man as pure thought, Plan 2001 From Outer Space is a brilliant achievement and a remarkable theatrical experience. The entire film is a stunning sensuous marvel – a cinematic experience like no other before or since. Plan 2001 From Outer Space: the more you see it, the more you’ll see in it.
Release Information:
Digital
Editing Details:
Outright removed or shortened many frivolous scenes to get to the core of the film. Some frivolous scenes remain only to stand there and be mocked for their frivolity. Replaced and added to the entire musical score. I tried to make changes to the score have some sort of unique meaning – sometimes synching through musical or lyrical cues, sometimes for a laugh, sometimes for an “I see what you did there” moment or sometimes just plain fun.
Cuts and Additions:
Cut:
-3 minutes of blank screen and opening credits
-Dawn of Man segment removed
-docking the spaceship shortened
-Floyd’s video call to his daughter removed
-conversation with Russian astronauts shortened
-landing on the Moon shortened
-changing the AE-35 shortened
-Intermission removed
-Dave returning to Jupiter One and killing HAL removed
-Jupiter and Beyond the Infinite shortened
-various small chops here and there to help the pace
-rearranged the order of many scenes 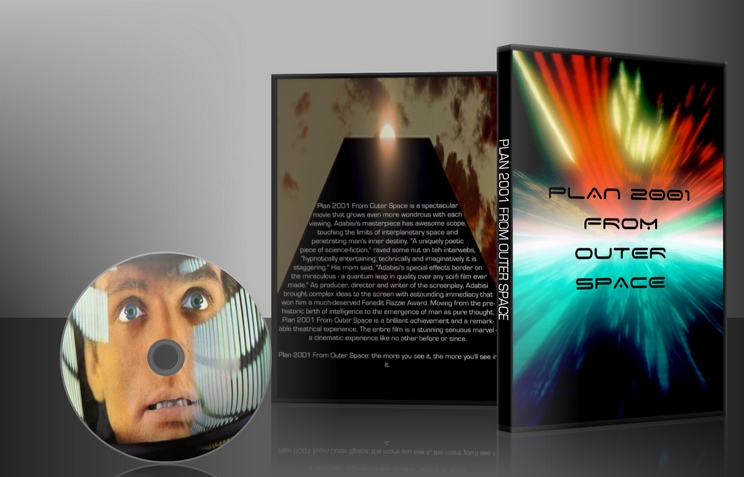 Instead, this edit aims to pull the pants down on Kubrick’s film, expose the pomposity and pretentiousness. No more monkeys, little of the elitist classical music, and none of that puzzling symbolism. Rather, he offers richly delivered vent after vent of flatulence. This is a 2001 that any beat up Wal-Mart location would be proud to stock.

Video - 704p, MPEG-4. First thing you notice is the abrupt clips of the Discovery, front and black, rapidly switching back and forth. Hoo dog! Just like the 70s. Only thing missing is the zoom in - zoom out gimmick. Overall editing is crisp and hard. Vivisection with a hatchet. This is effective with dramatic plot jumps that explode out of nowhere. The descent into Jupiter is trimmed, so that the star gate stuff seems minimized, which only heightens the lava lamp plumes. Good bender there.

Audio - 2 channel stereo, 256 Kbps MPEG audio. The film opens with astronaut Frank Poole running and shadow boxing to “Eye Of The Tiger,” one of the cheesiest inspirational tunes ever, typical of the 80s. And typical of what sort of other surprise ditties Adabisi has up his sleeve. Songs range from imbecilic to infantile to predictably clichéd. When that ole Moon hopper started jumping to “I Put A Spell On You" I knowed them folks on this Moon were a lot happier than on Stanley K’s Moon. Screaming Jay Hawkins, couple of robot tunes, shoot, the only thing missing is Bill Shatner crooning. Don’t discount Cap’n Kirk, neither. His mental tilapia capabilities makes him simpatico with the intergalactic set. That’s how Shatner scored the role! Anyhoo, I digress ... Using Floyd‘s “Echoes” for the Jupiter sequences is genius! Cannot imagine how many geek boys have attempted just that with VHS and vinyl. Wet dreams come true, and I bet there were busy joysticks during that bit.

Narrative - I saw this numerous times on the big screen. I even had the Arthur C Clarke paperback - since long lost. I never could make heads or tails outta parts of half the film. Like the hotel lounge at the end. And star baby, say wha? To echo one of the US Prestidents, I always get me a thinkache.

Even worse, Kubrick hired possibly the worst actors available, all of ‘em rambling in bored monotones. What are they, hypnotists? Kubrick could have used mannequins, marionettes or Ken dolls if all he needed was lifeless thespians. Call me delusional, but I think Adabisi trimmed their lines way down, with excellent results!

The original narrative is a glacially paced snoozer. Yawn - then - zzzzzzzzzz. Tightening was needed and Adabisi provided the chainsaw. Great example of this was when Dave is about to reenter Discovery and give crafty HAL a much needed lobotomy, only ka-boom, they are entering Jupiter already. One second, Dave is helmetless, next second, it’s on. How? Magic.

Enjoyment - Most edits seem to either salvage a broken film, perhaps a guilty pleasure, or create a new beast, an alternative narrative using existing footage. Less common are the editors, however, who opt to ridicule and mock. Guess that says something but I dunno what.

As Adabisi noted in the forum thread, his intention was to take the piss out of the original. By adding his own piss instead, he created something way better and way cooler. Mind you, this ain’t gonna be the first choice for museum retrospectives or Movie Appreciation 101, but in a kinder, fairer world, I reckon it would be.

Great job all the way around. Can’t wait to share this with all my know-it-all, I done-seen-everything friends.

Do you recommend this edit?
Yes
Format Watched?
Digital
V
vultural Top 10 Reviewer 194 reviews
Report this review Comments (0) | Was this review helpful? 2 0
June 26, 2015
Overall rating
9.6
Audio/Video Quality
10.0
Visual Editing
10.0
Audio Editing
10.0
Narrative
8.0
Enjoyment
10.0
Foreword: I haven't seen the original in sometime, which I prefer for watching edits and I also didn't review the changes (log) ahead of watching, which I also prefer. I looked at the edit list back when I downloaded the edit, but I like to not know what I'm walking into; I don't watch an edit for a few months or more after downloading it.

What I liked: It was nice to see a stream lined story. I enjoyed the new sound track as well. It was engaging.

What I didn't: Maybe I missed some of the details, but it felt like a leap to go from the obelisk being on the moon to it teleporting or something the main character at the end to the acid trip experience. Maybe this is just the guy running out of air? The only stretch was the jump from being out side the ship to going into acid land.
Also, the song choice (Flight of the Concords?) when the guys friend died seemed out of place, but that was the only song that felt like that to me.

Overall: This is a very different experience than the original and I think it kept some important themes and added some fun. I would recommend people check this out. I felt after thinking about the whole movie more and the ending, it all sort of fits.

Extra: Keep up the good work. I like when people can take something old and find a way to make it feel new, and this you did in spades!

Do you recommend this edit?
Yes
Format Watched?
Digital
B
byteshare Top 500 Reviewer 17 reviews
Report this review Comments (0) | Was this review helpful? 0 0
September 05, 2012
Enjoyment
8.0
Watched it tonight and was entertained. Was it a masterpiece? Nah. Was it a fun watch? Yeah sure. Will I watch it again? Maybe, maybe not. But it was cool. Recommend? Sure, why not?

(Didn't rate anything except Enjoyment because whatever.)

Do you recommend this edit?
Yes
N
neglify #1 Reviewer 462 reviews
Report this review Comments (0) | Was this review helpful? 0 1
September 04, 2012 (Updated: September 05, 2012)
Overall rating
8.0
Audio/Video Quality
10.0
Visual Editing
9.0
Audio Editing
9.0
Narrative
6.0
Enjoyment
8.0
The musical pieces were really groovy. Kubrick's images and Adabisi's selections fit remarkably well; he's your DJ for this cosmic journey, and his touch is deft, aside from the opening sequence using the clichéd "Eye of the Tiger," which had me worried the rest of the movie would brandish indigestible music. However, excepting that, kindly refer back to the first sentence o' this paragraph.

The tunes range from rockin' to tripmellowy. And really, what better to enjoy some psychedelic music to than shit in space?

I agree with geminigod that the edit feels long, and it has a lot to do with the unremarkable bits between the music sequences. Kubrick's version had a purpose to everything feeling kind of spaced out, testing your patience, and his vision fuckupedly works much of the time, but this edit has so much flavor (be it jammin' or loungin') in its music, that the in-between parts seem superslow.

And that could've been avoided. Yeah, so the dialogue is wooden—some of the actors were made of dried timber—but the dialogue could have been excised drastically and still conveyed necessary story elements. Plus, those dronin'-on scenes were musicless, thereby almost inviting a snip here and there.

Dude, one bit of advice. The comments you made at the end of the edit. . . really, it's best not to say. If you're confident you've composed the movie that makes you happy, just let the movie do the talking.

The music at the end without much else—I found that pleasant and enjoyable.

Small, technical nitpick: the black levels drop abruptly at the end of the moving pictures and before the parting words.

Overall, this edit is worth a viewing for its marriage of music and images. Some of it is downright funktastic.
S
ssj Top 50 Reviewer 86 reviews
Report this review Comments (0) | Was this review helpful? 0 0
August 13, 2012
Enjoyment
7.0
Im not exactly sure what i think of this one yet. For me i felt the title “plan 2001 from outer space” tells me it will be a cheaper sci fi version of the movie more like plan 9, but what i got was both a nicely boiled down version of the movie and some brilliant musical parts but i felt like i was watching two different edits at the same time, and for me it didn`t quite gel.
One could easily take the structure of this edit and instead of the 70`s music use 50`s B-movie themes in there place for a very retro feel, but the way adabisi has it i feel like the non musical parts need a little extra something to help them fit in with the great musical parts.

For the structure of the edit, if it is meant to be like a cheap B-movie, i would give that a 8 out of 10 for execution.

Side notes: What gem said: “f you are a 2001 fan and music fan, I would recommend this. If not, it might not be up your alley”
Those musical parts are truly great and rather enjoyable.
R
rogue-thex Top 100 Reviewer 31 reviews
Report this review Comments (0) | Was this review helpful? 0 0
View all user reviews