Brief Synopsis:
What was initially planned as a pretty gentle edit turned out to be as drastic as Infodroid’s Temple of Doom edit. Though it still seems slightly lighter in tone when compared to Raiders, this fanedit turns the 3rd Indy adventure into a fun, dignified, slightly more serious and much more worthy sequel to Raiders.

Intention:
To make it a more serious, dignified, and worthy sequel to Raiders of the Lost Ark, while still trying to retain a sense of fun. 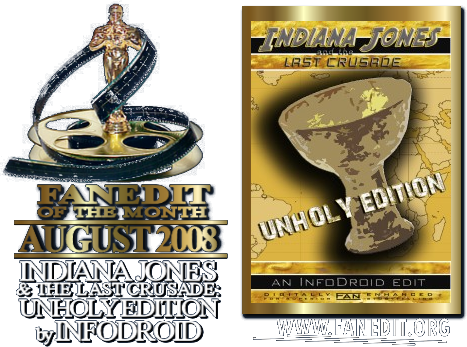 Release Information:
Cuts and Additions:
1) With apologies to River Phoenix and thanks to gaith1 for the courage of his suggestion, the entire Young Indy opening sequence was removed. Too much like a slaphappy Looney Tunes episode. Everything was too “on-the-nose” with the explanation of how he got the whip, how he got the hat, how he got the fear of snakes…the whole tone of that sequence was off. And the supporting actors were horrible. It’s so off in fact, it makes me wonder if Lucas directed that portion himself. It was Lucas’ way of getting a commercial in there for the TV series he had planned, and the few redeeming qualities of the sequence weren’t enough to justify saving it. Anyway, the film is given new
life by being freed from this goofy and awkward beginning.

2) Instead, we start the film with the Paramount logo fading to a ship on the stormy high seas, which leads right into Indy getting punched in the face on the Coronado. I inserted shots from a different film to accomplish this, and I’m sure you’ll all guess which one.

4) Removed white-suited villain’s line “This is the second time I’ve had to reclaim my property from you,” to avoid confusion.

5) Back at the college, removed Marcus Brody’s line “…my treat…”

6) When they get to Venice, removed Indy’s line “and my mother’s ears, but the rest belongs to you.” and then Elsa’s response…”Looks like the best parts have already been spoken for.”

8) Removed Indy’s line in the tomb about the water being petroleum before promptly lighting a torch. Thanks to ShiftyEyes for the suggestion.

9) Removed Indy’s line in the tomb about his father never making it past the rats. “He hates ‘em.” Too much symmetry. (Thanks Type12point.) We get the idea later when Connery asks, “Rats?” No need to beat us over the head with it.

10) During the end of the boat chase, Kazim shouts “My soul is prepared!” but doesn’t ask Indy “How’s yours?”

11) In Venice, Indy and Elsa kiss and drop below frame. They don’t come back up to say “Ah, Venice.”

12) Removed Indy and Elsa’s conversation in the car outside the castle.

13) By popular demand, I removed Indy’s Scottish-accent tapestry artist scene. Now we see an exterior of the castle followed by Indy and Elsa sneaking up to the Nazi control center.

14) When Vogel takes Elsa hostage, there was a little too much back-and-forth for me. Now, he simply says, “That’s far enough. Put down ze gun or ze fraulein dies.” Cut some of Connery’s lines like “Don’t worry he won’t.” Indy has much less time to make a decision now. “Enough! She dies!”

16) Once captured and in front of Donovan, removed Connery’s diatribe about how he knew Walter would “shell his mother…blah, blah, blah…to the shlime of Humanity.”

17) Removed Connery’s line about Marcus not being “up to the challenge”.

18) Reordered the Marcus train station “punchline” scene: Marcus meets Sallah at the train station but we cut it at “Don’t panic. Everything’s under control.” Then cut back to Indy and Dad tied up in the chair. We get the Austrian and German goodbyes. Then, when Indy tells his dad “Are you kidding? Marcus got lost in his own museum once.” we cut back to Marcus and Sallah meeting the Nazi director of antiquities guy. Cut the stupid bow the guy gives Marcus. They ask for Sallah’s papers. Sallah looks at them and says “Papers?”and we cut back to Indy and Dad tied up, “Can you try and reach my left jacket pocket?”

19) Reordered a few shots in the fireplace scene to fix some awkward editing and poor music-editing in the original and to eliminate the “Dad! What? DAD! What??? DAD!!! WHAT???” comedy routine.

20) The fireplace flips only once now before the Nazis notice them. Thanks to Type12point for suggesting it.

21) Removed the gag with Indy tumbling down the stairs after “a solution presents itself”. Now he simply says “Come on, Dad!”, Nazis pursue and the next time we see them, they’re riding out of the crate on the motorbike.

22) After the motorcycle chase, I re-edited the scene with them arguing about whether or not to go to Berlin. Cut Connery’s speech about “the armiesh of darknesh” marching all over “the facesh of the Earth”. I like this scene
so much more now. It’s far less preachy and they’re going to Berlin to get the diary back for the wealth of info it contains…not just the three simple-to-remember booby trap clues. Thanks to gaith1 for the suggestion.

24) Reworked the dogfight sequence. Now, there’s no dogfight at all. ME109′s swoop in and shoot them down, then one pursues them on the ground with strafing fire. (Thanks, gaith1 and Kolpitz!)

25) Removed the ME109 flying into the tunnel. What pilot would be that stupid? Plus, the special effects are extremely dated and the plane passing them in the next lane is just ridiculous. In my version, the plane chases them down the road, pulls up, then turns around and drops the bomb.

27) Removed Conney’s lines in the back of Sallah’s car. “Now they have the map.” (We already know that.) “And in this short of racesh, there’sh no shilver medal for finishing shecond.”

28) Removed Donovan’s line “Care to wet your whistle, Marcus?” and Brody’s response, “I’d rather spit it in your face. But seeing as I haven’t got any spit…”

29) Removed Connery and Brody’s thing, whatever it was, about “That genius of the restoration, aid our own recussitation”, nonsense. Now it appears the Nazis captured Connery and brought him into the tank.

30) Cut one of Vogel’s slaps, “What are you hiding?”…so that on the third (instead of the fourth) slap, Connery responds.

31) Cut Indy and Sallah’s argument about “No camels…” What was all that about anyway? It brought all the momentum that had been building in the scene to a complete standstill.

34) Removed Vogel stomping on Indy’s fingers while he’s holding on to the tank. Now, he just goes right for the shovel. Much more vicious.

35) Removed Connery’s and Brody’s lines about “It’s a war!” and “Didn’t I tell you this was a rescue?” This was the equivalent of C-3PO and R2-D2 in the Attack of the Clones end battle.

36) Removed Connery asking “Where’s Marcus?” on the top of the tank when he just watched him fall off.

38) Removed Indy shouting “Sallah! Get Dad!” And then Sallah’s line “Father of Indy! Give me your hand!”

40) Removed Connery’s exposition about how he “never told him anything. Five minutes would’ve been enough.” I feel Connery’s face, being the actor he is, says all of this in subtext without him having to vocalize it. He also says to Indy later “I thought I’d lost you, Boy…” So I think that says it all.

41) Removed Sallah’s and Brody’s reaction shots to Indy and Dad’s hug. This was their moment, brief as it was, and doesn’t need to have shots of Marcus making goofy faces crowbarred into it.

42) At Petra, Marcus still has a gun pointed in his face, but he doesn’t do all the nodding comedy schtick.

44) Removed Connery’s joke, “but in Latin, Jehovah begins with an I”. Indy tells us the same thing two seconds later.

45) In the final scene, I removed possibly the worst line of the entire movie…”Indy! Henry! Follow me! I know the way! AaaahhhHHHH!” Poor Marcus. I also had to take out a couple of brief shots of Indy’s horse catching up with Marcus’ and replace them with title cards.

46) Added a tribute to the cast in the end credits.
Cover art by Infodroid (DOWNLOAD HERE) 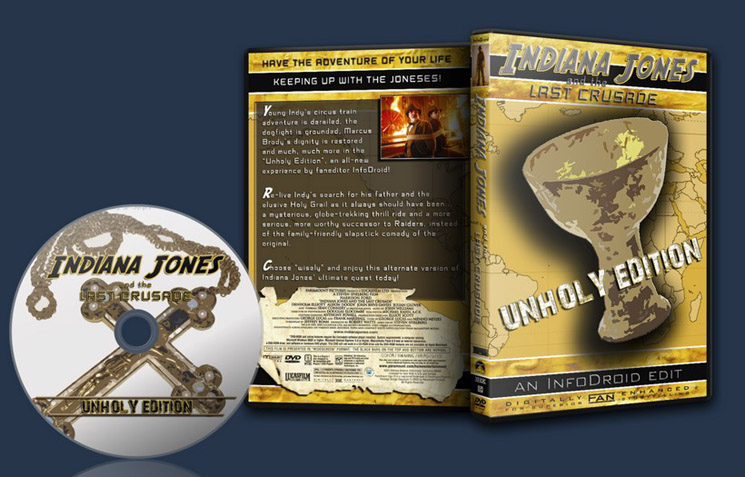 24 reviews
9-10 stars
42%
7-9 stars
33%
5-7 stars
25%
3-5 stars
0%
1-3 stars
0%
Overall rating
8.8
Audio/Video Quality
9.5(4)
Visual Editing
9.5(4)
Audio Editing
9.5(4)
Narrative
9.3(3)
Enjoyment
8.1(24)
View all user reviews View most helpful
January 25, 2014
Overall rating
9.1
Audio/Video Quality
10.0
Visual Editing
8.0
Audio Editing
10.0
Narrative
9.0
Enjoyment
9.0
having a indy fanedit marathon and so i started with this edit of the last crusade, out of the original trilogy i've always felt this was the weakest of the three though it's still a very enjoyable film. i must admit in that i don't mind the opening as it was, however the removal with this edit is done really well. both audio and visual editing is perfectly executed though you do feel certain scenes have been removed especially during the desert fight scenes. overall i really enjoyed this edit and would highly recommend it.

Do you recommend this edit?
Yes
Format Watched?
DVD
L
leeroy Top 50 Reviewer 76 reviews
Report this review Comments (0) | Was this review helpful? 1 0
March 27, 2013
Overall rating
10.0
Audio/Video Quality
10.0
Visual Editing
10.0
Audio Editing
10.0
Narrative
10.0
Enjoyment
10.0
just got done watching this one.
i had to have the cut list beside me because (other than classic lines/moments) i didn't notice anything missing. no jump cuts, no weird audio pops or fades.
there was only one way to quick moment of Connery at the end just before he whispers the name of God spelling bee trial. otherwise, all the cuts were terrific.
i really didn't notice either the continuity errors pointed out in other reviews.
i HATE silly one liners and vaudeville bits in movies, so this version of my favorite Indy film makes it even better.
i'm giving this a 10 across the board because i'm comparing it to the source and it's utterly solid from start to finish. the credits made are really nice and the end credit character montage is fun too. nice little addition there.
it would be nice if Droid would revisit this treatment in HD and maybe throw in some special features like some editing artists do now. but given it's release date, i understand why it's pretty bare, so i didn't let that effect my rating.
this edit accomplished exactly what was intended and it's appreciated.
poor Marcus.

This is a very bold edit, due mostly to ID leaving out the opening Young Indy sequence. This decision works well for those of us who didn’t particularly care for it to begin with, and takes you right into the movie very quickly (Perhaps a little too quickly for some, but not much could be done about that.) His use of footage from the Perfect Storm is inspired and blends in very nicely with the Last Crusade footage. Nice job integrating the new credits, very slick.

All the little cuts he has made throughout are well done and serve their purpose. The only real holes are 1) at the castle. How did they get in if it is a secret Nazi stronghold? Of course, given Spielberg’s original solution, this certainly can be forgiven. :) and 2) is during the attack on the German convoy. How and why did Marcus and Henry get into the tank?

There still one or two lines that could go (IMO), but other than a few minor qualms, this is a very fine edit. No audio / video issues, great presentation.

I’d say ID has achieved his intention with this fan-edit.

I thorougly enjoyed this edit. The execution was pretty much flawless and the overall story was really fun. Definitely one I’d recommend to others. :)
R
ripplin Top 50 Reviewer 103 reviews
Report this review Comments (0) | Was this review helpful? 0 0
View all user reviews

Fanedit.org does not host, provide links to, or sell fanedits. Do NOT contact us for such things. For more information please read our FAQ.
close
Toogle Down