Hobbit Part 2: An Adventure's End, The

Brief Synopsis:
To create two Hobbit movies I would want to watch over and over as a TRUE prequel to The Lord of the Rings
Intention:
When I watched the original movies, I found myself editing in my head as I watched. I wanted toremove the padding and invention, change the tone to feel like The Lord of the Rings and improve all the characters and plotting.
Additional Notes:
Generic Cutlist: - Deleted entire Prologue with Older Bilbo - Most of the Dwarves dinner antics are cut; only a few minor moments remain - All characters are significantly more serious throughout - There are no children in these edits - Azog is not under the orders of Sauron/Necromancer except in the TOLKIEN edit - Radaghast is removed in the FOLIO and BOOK edits, and retained but made more serious in the tOLKIEN edit. - The White Council scene in Rivendell is reworked for the 3 edits in different ways, with no forshadowing in the FOLIO edit. LOTR Continutuity error of Sauraon with/without a ring, corrected. - Rock Giants are removed. - Goblin tunnels are heavily re worked, but most of Gollum's scenes are retained, except for the FOLIO edit, where the Goblin tunnels sequence is split and about a minute of Gollum is deleted. Pine cones GONE (yes it is in the book, but the CGI is questionable and its too dramatic a sequence for the middle of film one and my edits de-emphasizes Azog significantly. Also, If Gandalf can summon the eagles who do his bidding, WHY NOT FLY ALL THE WAY TO EREBOR!!!!! - Most of Bilbo's struggling with how the Ring is changing him is toned down. - Tauriel briefly appears on screen twice and is just another elf. - Legolas appears twice, and though named, is also just another elf. - The Barrel sequence is significantly re-worked removing the orcs COMPLETELY (based on Spence's edit) - Bard's family is completely removed as are the references to the prophecy. - Alfrid only appears in one shot, has no lines of dialogue. - The mayor of laketown only appears twice, with minimal lines of dialogue to further the story. - Dol Goldur is de-emphasised.
Other Sources:
LOTR and HOBBIT Complete Score CDs
Release Information:
Editing Details:
Does anyone want yet another Hobbit Edit?

I made these edits cold, not having viewed any other edits. It took nearly 4 years and 1500 changes completed in 2017.
I started by stripping back to the book and re arranging some stuff including removing the prologue completely (not the first person to do that). But I hadn't at that point watched anyone else edit. I ended up with 3 versions, the Book edit, the Flio edit and the Tolkien edit running 3hr, 3.5rs and 5 hours respectively.
I then took my preferred 5 hr and chopped in two respecting the original break point the GdT has spoken of.
I then watched a few of the edits out there last year. There are some which are very good. Mine differ beacuase made a lot of micro edits that clean up character and performance. Mine do have non book elements, but none that are inconsistent with the books or the narrative. There are so many tweaks, new flashbacks, new openings and endings to both films and so much more.
Below is the very high level cut list..VERY HIGH LEVEL since there are 1500 changes overall (fully listed). 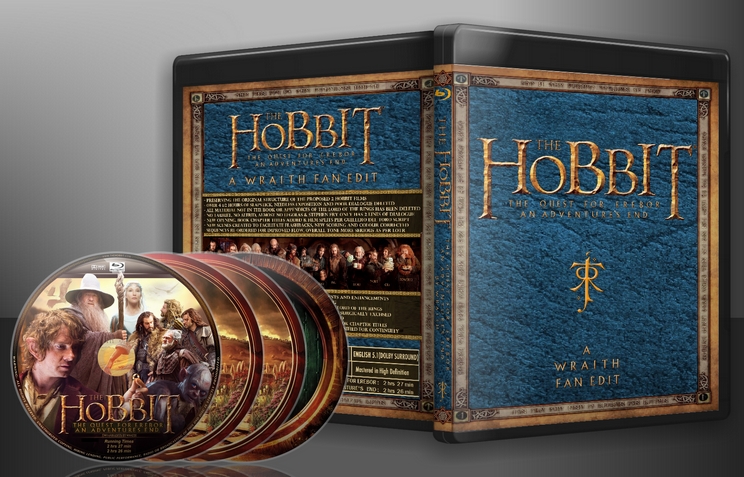 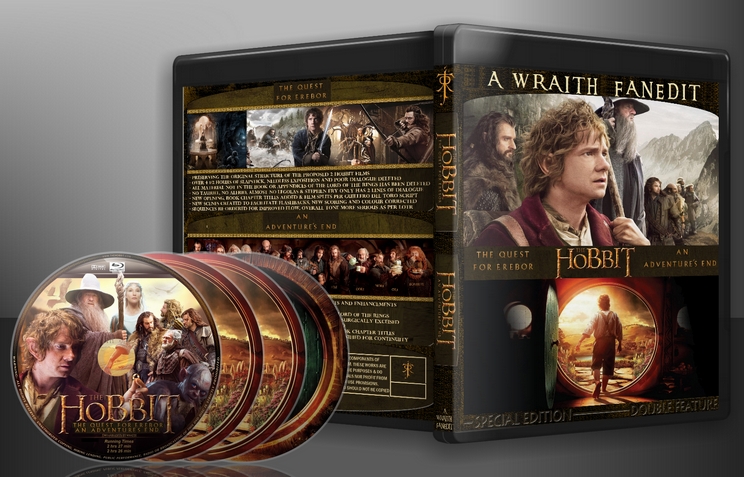 There are moments in Jackson's three Hobbit films that bring tears to my eyes and moments that make me want to gouge them out. If any trilogy needed to be edited, the Hobbit is it. Other fan editors have tried to create a book version. I don't think those work. As much as I adore the Rankin Bass version, a film has different needs than a 1977 cartoon that was structured very differently. That said, Jackson would've done well to adopt the charm of that film and drop the excess.

Wraith goes a long way towards streamlining the films in a way that doesn't harm too much of the narrative, and has a good technical skill to make it appear seamless. The White Council scenes and Dol Goldur--which feature some of the most powerful scenes in all six of Jackson's Middle Earth films--are thankfully kept intact, if sometimes spread out in ways that are interesting. Same with Radagast. Without the silly stick creature and getting high scene, he's a much more believable as one of the Istari instead of being played as yet more comic relief.

The opening is a much better edit than the original in terms of setting up the story, introducing Gandalf and Thorin and the quest.

Freeman epitomizes Bilbo for me; he's not perfect (he's sometimes too modern), but Ian Holm was always too old for the role in LOTR ("You haven't aged a day," gasps Gandalf upon seeing Bilbo again). Minimizing him (and getting Frodo gone) was good.

Some of the early parts of the film go by a little too quickly now for my tastes. So, while I'm glad to get rid of the excess dwarf antics in Bilbo's home, I'm not as happy to lose the Stone Giants (I can't fathom why so many fan editors delete what is such a magical scene that's so well done) or the songs in Goblin Town. So, those parts feel a bit rushed for my taste. That said, I might've trimmed some of Gollum, if only because I don't like the direction Jackson and Serkis took with him in this film. He should've been kept creepier until the moment Bilbo decides not to kill him (and even that's slightly overcooked).

On the other hand, losing Tauriel and the very ill-advised love-triangle was a revelation! For one thing, Evangeline Lily was miscast. Unlike Liv Tyler, Lily feels like an actress playing an Elf. And the overt romantic aspects (meant to appeal to a broader audience) don't work at all. Kili himself doesn't work. Thorin looks close enough to a Human; Kili crosses the line entirely.

Cutting Bard's family was another smart move. Luke Evans as Bard was another miscast. When a character requires his kids to make him likable, there's something wrong. What should've been a noble loner was turned into an unpleasant curmudgeon. Jackson compounded the problem by having a goofy Master and the goofier Alfrid. Had Bill Nighy or Charles Dance been the Master, you'd have had a real sense of danger. Instead, it's cartoonish and there are no stakes. To make up for that, Jackson added a pointless and annoying fight between Legolas and the most ill-conceived orc in film history. By removing all of that (except Bard, who we're stuck with), it makes for a less annoying film, but unfortunately one that leaves Lake Town as an abstraction and mere stepping stone to the Mountain. So, the audience doesn't care as much about Smaug destroying it. But these are structural problems no editor can overcome.

Getting on to third act. I struggled with the original third film. It's so bloated and overlong that what should've been exciting is simply boring. Well, I'm happy to announce that for the first time, the Battle of Five Armies works! The trims create tension and dynamics, both of which were missing. Not sure why the giant worms were left out (as with the Stone Giants, they're a unique creature to the world), but the rest is glorious and much stronger!

Some minor nits to pick. The 2.0 audio isn't great. (I upscaled it to a DTS neural track on my system, but it's still unpleasant). And some of the color grading was muted to such a degree that it looked black & white (see the scene outside of Mirkwood). I'm an audio & videophile, so the occasionally degraded picture and sound quality are things I can't help but notice. For most people, it won't be an issue.

This was such a fascinating edit and I'm grateful to Wraith for creating it!

This was a fun way to watch - I loved the chapter additions, it helped create pivot points that I think helped when watching a very long movie like this. The additions of a "Prologue" which allowed Thorin's story to start first, was a nice way to balance Bilbo and Thorin's journey, and just sets up the plot better.

The main criticism are personal preference: I think it went a little more serious than I was expecting (I miss some of the silliness,) and overall I'm not a fan of the bespoke color timing and vignette Halos, A couple flashback scenes work, but for me most of the time it was just a distraction. A couple other little notes about narrative I noticed and sent directly to the editor.

Overall this was clearly edited with a lot of love, and deserves a viewing for hardcore Tolkien lovers for sure
W
wakeupkeo Top 100 Reviewer 28 reviews
Report this review Comments (0) | Was this review helpful? 0 0
January 21, 2021 (Updated: January 21, 2021)
Overall rating
9.3
Audio/Video Quality
10.0
Visual Editing
10.0
Audio Editing
10.0
Narrative
9.0
Enjoyment
9.0
This review is for both parts of this edit.

I admit I’d given up hope on the Hobbit. I’m someone who first was exposed to the Tolkien world through the Fellowship of the Ring movie. I’ve since read the books, including the Hobbit. But I never wanted a book version of the Hobbit. Jackson seems to have not wanted one either, but felt he had to in some ways. The result was a disjointed and uneven theatrical version. The extended editions are better but still have too much.

This edit is the best I’ve seen. Though I admit I stopped trying after BotFA was released. This feels more like a prequel to LotR. But no edit will erase the flaws that were filmed. I recently rewatched LotR and it holds up. The world feels real, lived in. Here the CGI and sets stand out like a sore thumb; it feels rushed compared to LotR. It’s an inferior prequel, to be sure, but lord knows we’re used to that at this point. But if you’re interested in a prequel rather than a Hobbit movie, this is probably the best you’re going to get. There are pacing issues introduced by the edit. But I prefer these hiccups to the original. And that, my friends, is actually a ringing endorsement of Wraith’s work!

I still think that the best parts are in the early parts and it falls apart in the the conclusion. It definitely has the feeling of a Marvel movie where the last third is bombast for the purpose of bombast. Little is achieved narratively from a way too long action scene. And, my god, I don’t care if it was what Tolkien wrote (I can’t remember), repeatedly writing the heroes into impossible to survive circumstances and then having them saved at the last minutes by eagles is lame.

The Hobbit trilogy will never rise to the level of Jackson's Lord of the Rings trilogy. But this is now a watchable prequel.

Thank you so much for taking the plunge to watch yet another version and taking the time to comment formally. I agree fully, and the Eagles is lame, which is why I cut out the pine cone sequence. The eagles could have just flown them to Erebor (or Frodo to Mount Doom for that matter). I removed near half of the final bombast, but as you state, LOTR would have sufficed.

I'm glad it felt like a prequel.
Cheers!
W