Brief Synopsis:
Many fellow editors and fans alike wanted me to create extended editions of the theatrical structuures, much like Hal-over_9000's incorporating the myriad of changes, new material, new audio and fixes/refinements which I applied to The Magnum Opus.

Here at last, respecting the original choices (for the most part) of the original editor, is a fully revised and updated version of both of the first two Godfather movies in HD.

Here at last, respecting the original choices (for the most part) of the original editor, is a fully revised and updated version of both of the first two Godfather movies in HD.
Additional Notes:
PLead add hal_over_9000 as a co-editor since this is based on his orginal version There are two forum discussions covering this https://forums.fanedit.org/threads/the-godfather-chronological-edit-full-hd-rebuild-max-length-10h-5min.21197/page-22#post-404474 https://forums.fanedit.org/threads/the-godfather-trilogy-extended-editions-in-hd-by-hal_over_9000.11854/page-11#post-404463
Other Sources:
The Godfather Trilogy Limited Edition CDs
The Godfather Coda: The death of Michael Corleone
Special features from all Blu ray versions
The Godfather Epic 720 p (unknown source)
The Godfather 50th Anniversary 4K release
Hollywood or Bust Blu Ray
Freesounds.org
Special Thanks:
Gbeditsmovies, jswert123456, Moe_Syzlak, jrWHAG42, Heavysyde, stferguson78, flaminio, asterixsmeagol, sgp1428, grabaham, subjectzero, TheUltimate, Mako and morrigan for following my tortuous thread on this, their feedback, encouragement and support.

Extra Special thanks to Spence (for applying topaz to some material), Mako for some upscaling, tylrsmmrs and SonnyGFunk for their incredible QC and spotting things, and Tony.Montana79 for the same.

Finally, a thanks as always to the one and only ArtisDead...just because!
Release Information:
Digital
Editing Details:
Wherevever possible, the best source has been used but NOT the $k transfers which destroy the original Gordon Willis color palette. The so called "yello patina".

I have also added extensive additional new subtitles throughout, and corrected mis-translations. Original Italian audio has been put back where it was replaced, and many additional sound additions have been sourced from the various chronilogical edits.

The theatrical structure has been respected and all the relevant additions to The Magnum Opus have been added. The original credit roills have been maintaned and the opening credits re-created from scratch.
Cuts and Additions:
In addition to all the deleted scenes added (see at the end), the following additional changes have been retained (unless noted) from the Magnum Opus MO).

There are too many micro tweaks to list them all, but here are the main ones.

For the completests out there (i know who you are)...here are the additional deleted scenes (relative to the Theatrical version) that are present in both Don Vito's Opus and the revised "The Godfather Extended".

- Vito asks Sonny if he is paying attention at the wedding.​
- After Vito agrees to help Bonaser avenge the beating of his daughter,​
- Tom informs Vito Genco will not last out the night.​
- After Connie's wedding reception, Vito, his sons, and Johnny Fontane go to the hospital to visit Genco,​
- The men visit Genco on his deathbed.​
- After a short conversation, Genco becomes weak, and Vito motions for his sons to leave the room, (additional shot added too)​
- Tom sees Woltz giving a pony to an actress is reworked using BOTH alternate versions re-editted- Tom sees the actress in Woltz's house.​
- After Woltz kicks Tom out after dinner, he walks to the exit, looks up, and sees Janie, crying at the top of the staircase,​
- Additional footage of Tom, Sonny and Vito discussing the Woltz situation before the horse head scene.​
- Connie and Carlo argue/ Vito decides to send Luca Brasi to reason with Woltz​
- Michael and Kay call Tom from a hotel room.​
- Extended footage of Luca brasi walking to the meeting with the Tattaglias.​
- Sonny gets a call after his father is shot informing him about the abduction.​
- Sonny informs his mother of his father's shooting, takes control of the family.​
- Extended Footage of Michael driving home.​
- Rocco and Clemenza talk about the Paulie hit before getting into the car.​
- After Michael meets Clemenza, he asks Hagen's wife Theresa how he is.​
- After discussing Hagen enters the room.​
- Before Clemenza leaves the house with Paulie, he and Rocco Lampone talk about Clemenza's car (an additional longer shot of the car)​
- Clemenza makes a stop to call sonny and eats lunch.​
- Michael and his bodyguards come across communists marching in Sicily.​
- When Michael is hiding in Sicily, there is a scene in which his bodyguard Fabrizio asks him about New York,​
- Fabrizzio asks Michael about America.​
- Extended Footage of Michael walking through Corleone.​
- Michael visits his father's childhood home in Sicily.​
- Extended Connie Carlo fight scene and restored expletives.​
- Bonasera prepares to meet Vito at his funeral parlor.​
- After Apollonia incident there is a short scene of Michael in bed,​
- Michael speaks with Vito after his return from Sicily.​
- Before Hagen asks Michael why he is being replaced as consigliere, there is some short extra footage.​
- Extra footage after Michael says "You're out, Tom." These two short scenes talk about Al Neri.​
- Extended Footage during the Tessio/Clemenze/Carlo/Tom meeting with Vito and Mike.​
- After Hagen leaves the room, Vito takes Michael out to the garden through the French doors in the study.​
Cover art by Wraith (DOWNLOAD HERE) 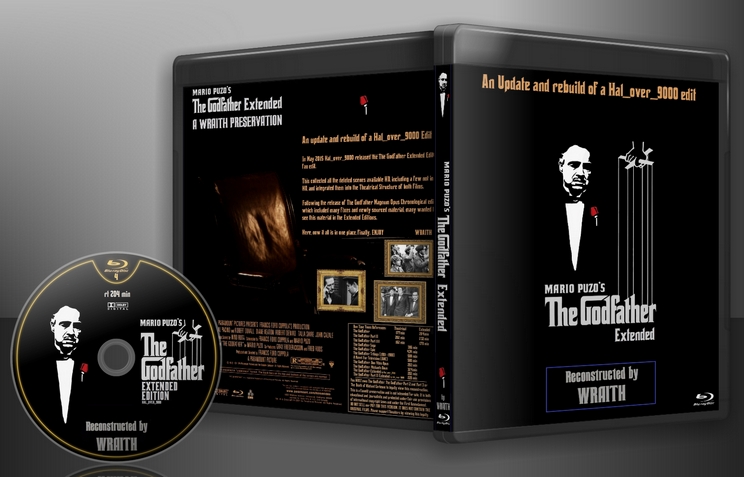 ... later in the movie, one of the deleted scenes shows Bonasera preparing to meet Vito at the funeral parlour. This deleted scene expands on the feeling and opinions of Bonasera, because during this scene he talks to his wife and explains that he never wanted to be friends with the Corleone family because they were always at war with other families. Eventually, Vito would want help "making a body disappear, and that would make me an accomplice to murder. They could send me to prison, and if the other families find out, then that would make me their enemy. I curse the day that Corleone and I became friends."

It is precisely these brief but subtle inclusions of additional conversation(s) that make Wraith's extended version superior to the original Hollywood masterpiece - the characters are more well developed, not just the main characters but the supporting and minor characters as well.

Lastly, Wraith has a tendency to label his movies with modern computer terminology; e.g., Version 1.1 or Version 2.3, etc. Continuing with the computer jargon, the 1972 cinema cut could be labelled as "Godfather - Lite" while the 2022 Wraith fanedit could be [more accurately] renamed "Godfather - Professional Version."

This is a brilliant example of a dedicated fan-editor demonstrating loving devotion to an artistic masterpiece, and actually making it superior to the original.

Do you recommend this edit?
Yes
Format Watched?
Digital
D
davbro02 Top 500 Reviewer 18 reviews
Report this review Comments (0) | Was this review helpful? 0 0
November 08, 2022
Overall rating
10.0
Audio/Video Quality
10.0
Visual Editing
10.0
Audio Editing
10.0
Narrative
10.0
Enjoyment
10.0
Another wonderful edit from Wraith. I have seen a few of the other GF edits, including the laborious HBO broadcast, And I was working at Panasonic when we made the DVD box set. Paramount was such a pain in the ass... but that's my history...lol. My day was spent downloading the watching this edit. A bad habit of mine is I usually have two or three other things playing at the same time. Some just for noise sometimes to see what keeps my attention. Well I actually turned down everything else and watched this edit. Why? Because it kept my attention. I was even going to myself, wait that's new thats this or that. So this edit had me watching very intently. Again I don't do the techie stuff just enjoyment value. On my personal popcorn scale this is a 6 out of 5. I am in the process of downloading GFS, can't wait