The “Alfred is dying” subplot has been removed.
A lot of the idiotic dialogue is gone. Not all, but most of it. And no “cartoony” sound effects.
While the ice-skating scene remains, it is not as blatant. And we don’t see B&R click their heels together to pop skates out of there boots.
Very little Bane and we don’t hear him saying “BAAAAAANNNNNEEEE” at any point. He is still a moronic henchman to Ivy.
The whole “competition” between B&R is gone for the most part. Robin doesn’t whine in this version and the petty bickering between the dynamic duo is gone.
Batman speaks very little and comes off more “professional”.
As stated previously, Ivy remains the same. This is due to the fact that Ms. Thurman’s entire performance is campy and over the top.
Batgirl is still in the film. But her character has been reduced significantly.
Freeze is now much more menacing and a bit darker. His stupid one-liners are cut to a minimum. Still not what you would want, but much better.
All the stupid gangs and motorbike racing scenes were eliminated.
The opening credits are more “Bond-like”, in that the movie opens with B&R battling Freeze and then the opening credits roll once Robin is thawed out.
Idiotic visual elements such as the Bat-skates, the Bat-credit card, butt and crotch shots, etc. have been removed. 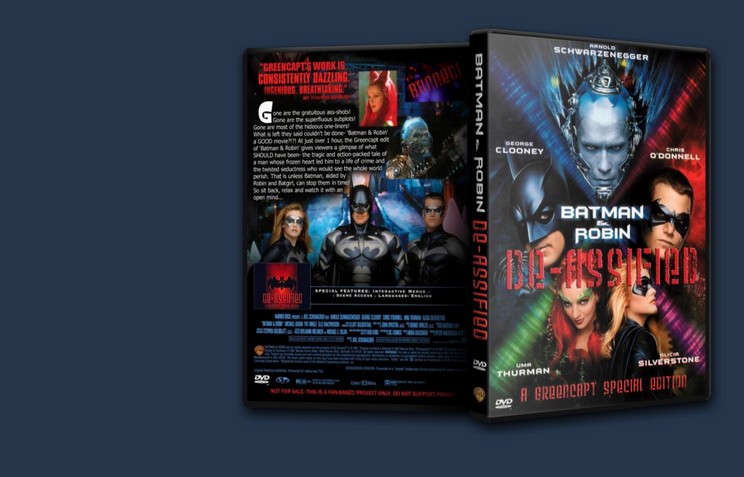 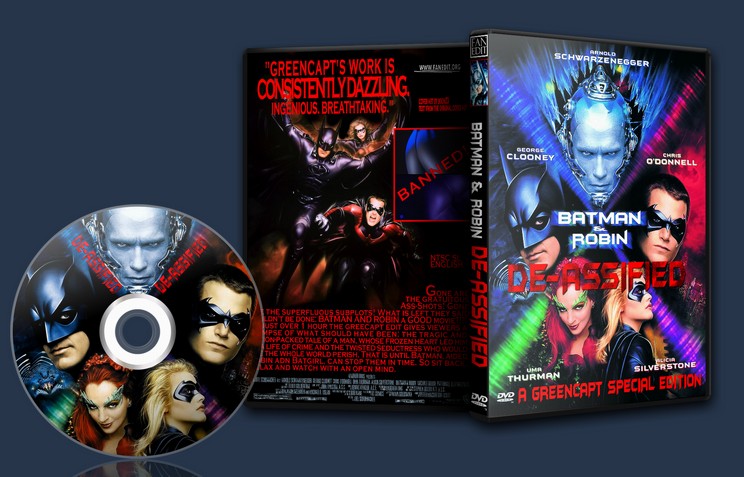 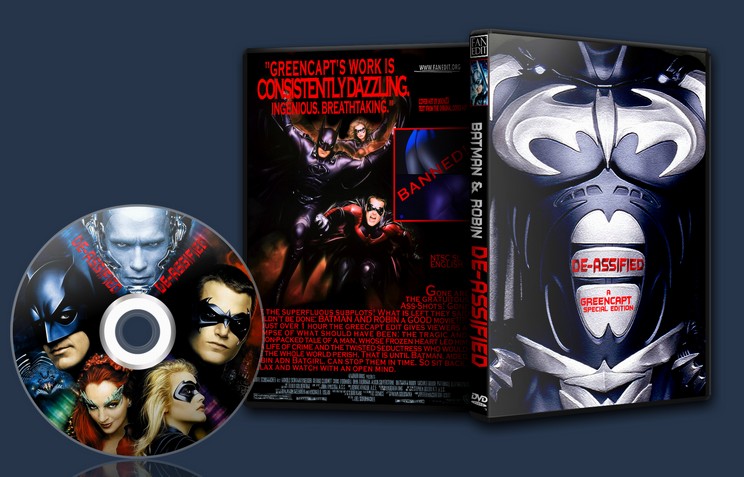 But having pruned (because... Poison Ivy) the film's twenty-or-so plotlines gives the viewer a little bit better chance to focus on the best performance of the film, which is surprisingly... Arnold Schwarzenegger's Mr. Freeze. Spared of the rapid-fire puns, his character actually has a fairly convincing arc and his mix of kabuki camp and grounded emotions wouldn't have been out of place in one of the earlier Burton-directed entries. (The same cannot be said of Uma Thurman's Poison Ivy, who is a Schumacher creation thru-and-thru. And the less said about Bat-Alicia, the better.)

A serviceable digest version of an overblown disaster, but there's a better edit of this film out there somewhere, waiting to be seen.

Now, on to the edit, one of the first real FE.org legends

Has it aged well? I think by modern fan or pro editing standards I'd say no, there are too many cross fades and moments where the music and audio cues fail to synchronise (particularly at the end), the narrative works well though, hitting on all of the vital story beats so it doesn't feel like a lot is missing other than Alfred's subplot (a shame, as I feel it is the emotional crux of the original movie and gives Bruce a dog in the race to paralel Freeze's struggles with Nora) everyone feels more in control. I'd point out what I'd keep and cut, but you need only look at my own Batman and Robin edit to see how I did (shameless self promotion)

As a condensed action/adventure piece, it is a decent highlight reel of the movie, but could have been so much more if they'd kept Alfred's plot in. Overall, despite it's flaws, I'd still recommend it if you're looking to hone your skills and want to view an early example of how things used to be done compared to now, and what was acceptable for FE.org back then
Z
zarius Top 50 Reviewer 122 reviews
Report this review Comments (0) | Was this review helpful? 1 0
June 11, 2019
Overall rating
9.2
Audio/Video Quality
8.0
Visual Editing
8.0
Audio Editing
8.0
Narrative
9.0
Enjoyment
10.0
Okay! A FanFix of people consider "the greatest crime in cinematic history". Let's see if this cut of Batman & Robin still holds up today.

As you know, B&R was subject to a cinematic blazing on release in regards to its silly nature, over-abundance of campy one-liners, and excessive neon lighting, all of which distracted from the main conflict of the film: trust issues between Bruce Wayne/Batman and Dick Grayson/Robin.

According to the official thread for this fan edit on originaltrilogy.com, this began as a challenge for a user known as BatmanMD. When another user known as greencapt agreed to take it on for himself, what came out was beloved by Batman fans everywhere as a major improvement over the theatrical cut.

In August 2017, I got to see for myself the "masterpiece" greencapt had put out 12 years prior. And in my honest opinion, it works. It really works. I have no idea what greencapt is doing to this day, but without a shadow of a doubt, I must commend him for his valiant attempt at making B&R "watchable".

To be fair, I actually pretty like the theatrical cut for what it is: a movie made for a broad audience to appeal to a younger demographic. Of course, this attempt was botched by Warner Bros. bigwigs' desire to turn a profit. Within layers of silliness lies an emotionally investing tale about trust and family.

To start off, the story.

greencapt has done his best to peel back the aforementioned layers and let the filmmakers' true intentions shine. The film has been cut down to a lean 66 minutes, removing a major subplot in the process — the one in particular being Alfred's diagnosis. This isn't too much of a loss, as we still have Mr. Freeze's wife, Nora, in cryogenic stasis while he continues his research for a cure.

All of Batman and Robin's arguing has been stripped away, making it look as if the dynamic duo are working together all the way through. This is honestly really impressive for what greencapt was going for, as you don't have to sit through Robin's petty whining and the whole competition for Poison Ivy.

George Clooney's performance as Batman has been re-edited so that he comes off as more "professional", and his relationship with Robin is more laid back in this version. The new addition to the team, Batgirl, remains in the film, but her character has been reduced significantly to maintain significance to the main duo.

The main villain, Mr. Freeze, is also drastically different to the theatrical cut. His ice puns have been scaled back dramatically, leaving only two or three intact, and he no longer helps Batman at the end of the film. He is more sinister and cunning, and all-the-more determined to cure his ailing wife. And speaking of Poison Ivy, she remains pretty much the same. This is due to the fact that her entire performance is over-the-top, yet she does her part in balancing out the darkness in her pairing with Freeze.

And the coup de grâce, Bane! Bane, portrayed by the late pro-wrestler Jeep Swenson, is more badass in this cut than he was before, and we get very little of his growls and roars. One gripe many tend to have about him in this version is that he disappears without explanation near the end, though greencapt soon makes up for it with a chilling yet awesome post-credits tease (which is very much reminiscent to a horror movie), where he rises from the smouldering wreckage of the Gotham Observatory.

And finally, the editing.

Dear God, now I know first-hand the meaning of the term "De-Assified", both in a literal and metaphorical sense! The bat-arses and crotch shots have all been cut (feels kinda weird saying this during Pride Month, since Joel Schumacher is an openly gay director), and the motorcycle race with Coolio as the banker is also gone, as is Vivica A. Fox's cameo (for the good of the franchise, ma'am).

The reverse shot of Robin during the fight between Ivy and Batgirl is omitted, and our heroic duo no longer click their heels together to pop skates out of their boots during the museum clash. It is literally everything any Batman fan of any kind could ask for. And plus, the film is presented in crisp DVD quality for your viewing pleasure.

One thing I like the most about this cut is the ending — where Mr. Freeze confronts a mentally-impaired Ivy at Arkham Asylum and vows to "make her life a living hell". His chilling (no pun intended) final words, "Winter... has come at last", are what close the movie as the screen smash cuts to black on Ivy's terrified face.

Now I will admit, the edits aren't perfect. Just as mrbadcrumble stated, there are a few fades too many, and compromises had to be made in terms of audio editing. But you can definitely tell greencapt tried his hardest to redeem this shining turd. And as I said, some of the camp remains intact. But hey, it's a 90's movie. What do you expect?

Overall, this is a fan edit that comes off more as three continuous episodes of The New Batman Adventures rather than an actual, three-act movie. But it is a fan edit worth tracking down. I can assure those that it'll sit comfortably on your shelves as a worthy follow-up to Batman Forever. greencapt, I tip my hat off to you, sir, for this impressive achievement of yours — making B&R a bearable experience to those who couldn't get through the first hour of the original.

Joel Schumacher is a rather fine director in my view, and I commend him as well for giving it his all for his two Bat-outings, even if Batman Forever reigns supreme as a true Batman film (with a bit of tinkering here and there). So I can't blame him for being forced to amp up the camp just to please the Hollywood suits.

What's more, the theatrical cut is what lead to the unfortunate cancellation of the fifth film in the series, Batman Triumphant, which would've brought the franchise back to its darker, more serious roots, and probably would've seen the return of a few familiar faces. ;)

Nevertheless, Batman & Robin: De-Assified, even if it has a few editing detractors, is worthy enough of a watch. It'll please those who loathed the decisions made in the theatrical version, and it'll DEFINITELY please Batman fans alike. I think I speak for all of us here on the IFDB when I say — highly recommended! Go give it a watch, you won't be disappointed! A solid A+ from yours truly!

Do you recommend this edit?
Yes
Format Watched?
Digital
M
motleycat-enterprises-inc Top 500 Reviewer 5 reviews
Report this review Comments (0) | Was this review helpful? 0 0
October 30, 2017
Overall rating
6.7
Audio/Video Quality
8.0
Visual Editing
8.0
Audio Editing
9.0
Narrative
6.0
Enjoyment
6.0
I haven't seen the original in years. No real memory of it, even, other than it sucks. This edit improves the suckiness. The movie still sucks, but it is far less painful to watch. No doubt a replacement edit.

The editing is good, and most of it is seamless. As someone mentioned below, a few fades too many. But with the amount of footage removed, this is understandable. Audio-wise I have nothing to add. Solid. The narrative is what it is. Removing an hour's worth made it a bit clearer (!), but a bit rushed. I didn't mind, though, because this movie sucks. Not an easy edit to rate, in other words. Everything greencapt has done is good, but the source is just beyond saving. It sucks, even.