Adventures of Superman, The - The Kryptonite Saga Vol. 1

Brief Synopsis:
The Adventures of Superman is a radio serial that aired from 1940 to 1950. Every episode has a runtime of about 12 - 15 minutes, including an intro and an outro, a commercial break and rather long recaps as well as scenes of repetitive or expositional dialog. You're basically left with about 6 to 7 minutes of actual story. I removed all of the unnecessary stuff and turned eleven episodes into one. I also added sound effects and musical cues from John Williams' score (plus a few seconds of Hans Zimmer).

The 11 episodes I picked are the beginning of a 76 episode story arc; the longest sequence the show ever did. It's the story of The Scarlet Widow stealing the only existing piece of Kryptonite and splitting it between four of Superman's enemies. One part of the Kryptonite is stolen by Der Teufel, a crazy Nazi scientist, to power The Atom Man.
Intention:
I wanted to create a smoother listening experience.
Additional Notes:
About the Show

The Adventures of Superman contributed substantially to Superman canon. Superman first encountered Kryptonite on the radio show (as you can hear in this edit) and also teamed up with Batman and Robin before he did in the comics. It also introduced characters such as Perry White, Jimmy Olsen and Inspector Henderson.

First broadcast for a trial period in 1938 on some out-of-the-way radio stations, then brought back on The Mutual Broadcasting System on February 12, 1940 as a thrice-a-week juvenile serial. Mutual never realized at the time how popular the show was and discontinued the program on March 9, 1942. The public, by submitting thousands of letters, convinced Mutual executives to continue the program. The series was revived on August 31, 1942, as a five-a-week, fifteen-minute series and continued till February 4, 1949. The series shifted to ABC Saturday evenings on October 29, 1949, and then returned to afternoons, twice-a-week on June 5, 1950, continuing on ABC until March 1, 1951.


Clayton "Bud" Collyer portrayed Superman in over 2000 episodes. In the 50's and 60's he moved to television as the host of shows like Beat the Clock or Tell the Truth.

Unfortunately there is hardly any information online when it comes to side characters, so I don't know who played Der Teufel or Sniggers. Blimey! Quite often actors would play several roles, sometimes within the same episode, so it's probably one of the actors mentioned on the Wikipedia page.

Additional information about The Adventures of Superman:

The Wikipedia page for The Adventures of Superman


IMPORTANT NOTE FROM THE ADMINISTRATORS!

Since this is an audio-only fanedit the review criteria of Visual Editing doesn't apply, but reviewers are required to rate it. Simply rate Visual Editing the same as you rate Audio Editing and the administrators will manually fix the rating.

Other Sources:
Superman The Original Score, John Williams
Man of Steel, Hans Zimmer
Several Sound FX (Footsteps, doors, waves, etc.)
Special Thanks:
Special Thanks to Seciors for dealing with my lack of technical vocabulary.
Release Information:
Digital
Special Features
- MP3 only release.
Editing Details:
Too many to mention and yet too uninteresting to list them all. I cut some episodes down to four minutes, if I felt they were too drawn out. In other cases it was just single lines or words I cut.

The sound quality of the original files is a little rough at times. If you are annoyed by a constant crackling, this is not for you. First I tried to clean up the files, but then I realized that it's a huge part of why I love them in the first place. Nostalgia, I guess. Since this was recorded in the 1940's with one microphone, the volume levels of the actors tend to vary. I tried to fix it, but it's still audible at times.

You can find the original episodes for free and legal DL on various websites.
Poster art by Siebener 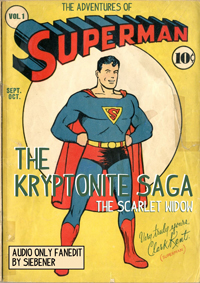 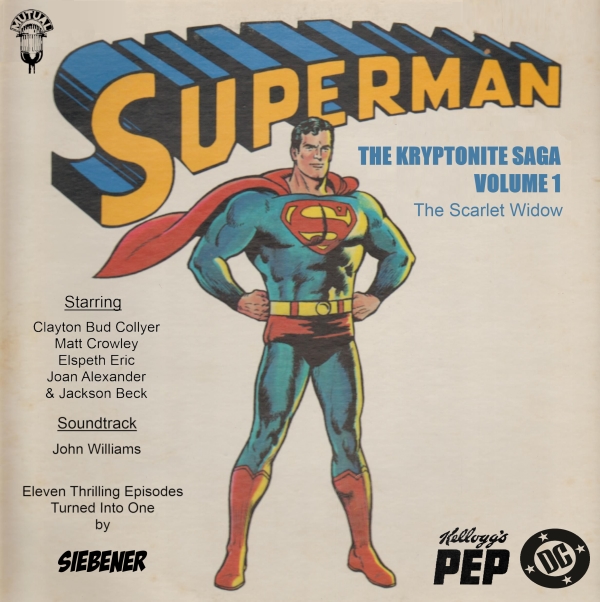 Format Watched?
Digital
D
dingo Top 100 Reviewer 42 reviews
Report this review Comments (0) | Was this review helpful? 0 0
December 10, 2013
Overall rating
9.4
Audio/Video Quality
10.0
Visual Editing
9.0
Audio Editing
10.0
Narrative
10.0
Enjoyment
9.0
One problem that usually makes me shy from radio drama is the very thing cut from this: recaps. And intros and outros. We in the twenty-first century like to consolidate entertainment experiences, meaning anyone listening to a radio drama these days is likely to listen to one episode after another.

The Scarlet Widow is intelligent, experienced, and crafty, all while being a believable villain. She bests Superman and it is earned.

We see Superman in an interesting position. For the first time he's frightened by the real prospect of death, but faces the threat bravely, proving his bravado transcends super-powers. Once again, believably so. All the while his civilian identity is in danger. He has to keep his behavior as Clark Kent in check constantly.

The music was a welcome addition. I wish there had been more Zimmer, because the MoS soundtrack would fit even better with the eerie/nostalgic atmosphere than Williams' score (as preposterous as that may sound).

This is a film of the mind. Listen and enjoy.

Do you recommend this edit?
Yes
Format Watched?
Digital
R
reegar Top 1000 Reviewer 2 reviews
Report this review Comments (0) | Was this review helpful? 0 0
November 21, 2013
Overall rating
9.7
Audio/Video Quality
9.0
Visual Editing
10.0
Audio Editing
10.0
Narrative
9.0
Enjoyment
10.0
I'll make this short and sweet. I really enjoyed this edit. It's different than anything else in the fanedit community, completely worth your time. The music sucks you right into the narrative and is never overpowering. The dialogue is, at times, clunky, but that's a consequence of the medium. I'm very impressed with this edit. It really sounds professional, as though DC decided to breathe some new life into the old stories. Well done, sir.

This would make a nice introduction to OTR (old time radio), and it is just short enough to listen to on a commute. Say, 40+ minutes each way.
Bear in mind, however, Superman was a childrens program, so the plot was simplistic and many characters are adult juveniles.
While not a kiddie show, it still seemed aimed toward 8-12 year olds. Nothing wrong with that, especially since recent movie action fare targets 14-22 year olds.

I certainly recommend this for the curious, and hope Siebener continues with a part 2, since the next section details Superman's fight with Atom Man, the most highly regarded section of the series.
Well done.

Do you recommend this edit?
Yes
Format Watched?
Digital
V
vultural Top 10 Reviewer 209 reviews
Report this review Comments (0) | Was this review helpful? 0 0
August 21, 2013 (Updated: August 22, 2013)
Overall rating
8.4
Audio/Video Quality
10.0
Visual Editing
9.0
Audio Editing
9.0
Narrative
8.0
Enjoyment
8.0
Superman was always my favorite superhero growing up, and probably still is. That's why I was intrigued by Siebener's edit based on a Superman radio program from the 1940s. I had no idea it existed! But I'm glad I had the privilege of listening to his work, as it provides not only a new perspective on the "Man of Steel" for modern-day audiences, but also serves as a well done enhanced version of this long forgotten but still entertaining material.

As usual, I rate quality compared to the original source. All the "defects" one can hear are from the original (I did listen to some of the original recordings to compare!). But Siebener actually enhances the quality by reducing the background static in places so it is never overpowering. The original voices and sound effects are very clear. Siebener also integrates music from the modern movies of Superman, and the quality of these additions is top notch.

Siebener's audio editing is terrific, to say the least. He has taken 11 separate episodes, each with a canned beginning, canned ending, as well as "catch up" material that would be repetitive in a single edit, and reduced that to a single cohesive story. With regards to his editing, I could detect absolutely no hard edit points at all, and the same is true for the musical score he added. Truly a stupendous job considering the task at hand!

I have very few criticisms in this area. Perhaps in a few places the audio levels could have been tweaked just a bit more; and while there were no hard edit points, once in a while I could tell where there was a joining of two different episodes, or an early fade out. Finally, while the added music was generally outstanding and nicely varied, one particular musical selection (to me) felt just a bit overused.

But I must emphasize how small these few issues factor into the overall superb editing job that is on display here. Excellent work, Siebener!

VISUAL EDITING - 9
N/A - set to the same as AUDIO EDITING per instructions by the admins.

Siebener does a commendable job piecing together a story that spans across 11 episodes so that it becomes one tale, told without repetition, and without plot holes.

Siebener also includes a couple commercial breaks, which I found to be fun and entertaining. Nice touch!

That said -- and this is no fault of Siebener's -- due to the nature of the radio program itself, there are parts that for me seemed to drag on a bit. I'm sure this is because for each installment, a specific length had to be met. Thus we get some areas that have a bit more exposition than I'd prefer. But generally speaking, the story moves along just fine. I just would have liked it to move a bit faster. :-)

The best part for me was experiencing the Superman universe from a whole new perspective, that in many ways is very different than all other mediums. Siebener's added music really helped me get into the story. Of special note is the introduction, where Siebener expertly synchronizes the most famous of Superman themes from John Williams' fantastic score with the narrative beginning, which for me was quite exhilarating to listen to! But throughout the edit, the added music really serves to pull the listener in; without it, I think this would have been a completely different (and not nearly as enjoyable) experience.

As this show was primarily meant for kids, I cannot take too much off for the fact that I found the story a bit one-dimensional. While it is not a comic book, I felt the story was similar in terms of depth and plot development. That's not a bad thing; it's sometimes fun to re-experience one's youth (as I did read Superman comic books all the time!), and in a different way (e.g., audio vs visual).

Additionally, one cannot help but notice how the radio show was influenced by the current events of WWII; this story takes place soon after the end of the war, and the idea that Nazi's were still a menace plays a part. I found this to enhance the listening experience, as it was similar to watching a movie in a specific period.

Finally, I found it interesting to hear how all the characters (Clarke, Lois, Perry, Jimmy, Superman) interact differently than what I'm used to. As Siebener points out, most of the events that take place in the radio show predate the comic books (and of course, the movies!)

Overall, I found this to be a very enjoyable listening experience, and I have to say Siebener did an excellent job all around; his attention to detail is truly amazing, and I applaud him for introducing this site to a whole new category of fan edits.

I am definitely looking forward to the next installment in this series!

Great job, Siebener, on your first of what I hope to be many edits!

I can definitely recommend this edit to anyone who has a remote interest in Superman, and/or what radio programs were like in the 1940s. Also, given the uniqueness of this edit on fanedit.org (being the very first audio-only edit!), I would encourage everyone to give it a try. :-)