Hobbit (Ironfoot Edition) - Part I, The 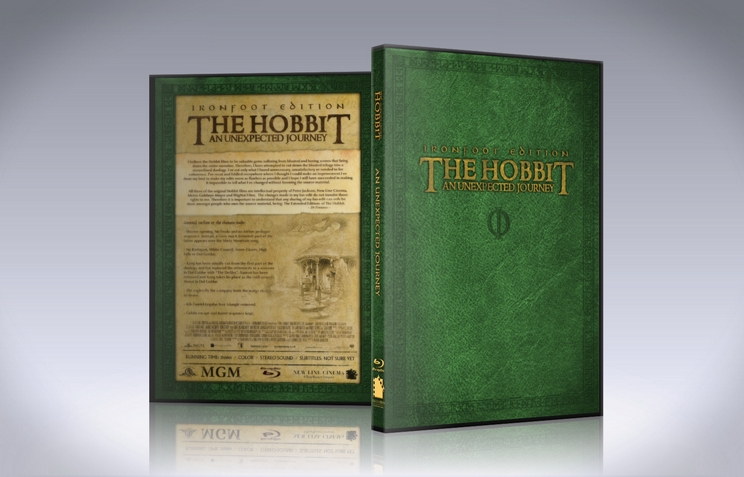 I took many notes for feedback, but in reading through the review of WillosophicalWill I found that he covered most of my comments exactly. Assume all of his comments apply, but here are a few other observations:

--Crack the plates song; I'm mixed on this one and think its a keeper, though it pushes the limits of silliness I can tolerate, like the one dwarf catching plates behind his back without looking. I never had the impression from Tolkien reads that dwarves were masters of dexterity.

--The Bilbo faint cut is awkward. I think that should have been left in. It's a further indicator of just how sedentary he has become.

--Dumbest scene in the movie is when the dwarves throw down their weapons because the trolls are threatening to pull Bilbo apart. What does that accomplish other than let them all be eaten? Only the Menbailee cut has addressed this - it's an awkward clip but I was willing to deal with it just to have that ridiculousness removed.

--It was hard to figure why Elrond's elvish intro to the dwarves was removed.

--To me the bear chase should have been left in. It explains why in the later scene he's outside chopping wood and has not and already seen the dwarves.

--Echo Mirkwood. More time in there stumbling around is great, a more sinister feel results.

--Color change with Bilbo and butterflies outstanding. Scene was much more powerful.

--I can't deal with the dragon vs dwarf scene, even edited. Truly my advice is delete it into the void, even in a playful edit such as this one. It's one of the worst creative license decisions in the history of movie adaptations. Have I conveyed my loathing adequately?!

--This edit has joined my permanent collection! Nice work!

Do you recommend this edit?
Yes
Format Watched?
Digital
K
kellenpure Top 500 Reviewer 21 reviews
Report this review Comments (0) | Was this review helpful? 0 0
February 02, 2016
Overall rating
9.1
Audio/Video Quality
9.0
Visual Editing
9.0
Audio Editing
8.0
Narrative
10.0
Enjoyment
9.0
The Good:
As with all other fan edits, the focus is shifted back to Bilbo, and the quality of the film is improved a thousand times over due to Martin Freeman's fantastic performance.
Shrouding Azog in mystery builds up a lot of anticipation for the battle of the five armies, and it's good that all allusions to Sauron are removed.
The Lonely Mountain violin tune near the beginning. I genuinely got chills hearing it.
The way you handled the wargs sequence was fantastic, it flows incredibly well, and the subjection colour correction you've done for continuity was also amazing.
Thank you for including Beorn's intro scene, as well as the extended scenes in Mirkwood. The scenes in the Mirkwood forest were some of my favourite scenes in Jackson's films, and it's so nice to see them get a chance to shine.
Tauriel. You handled Tauriel extremely well. We finally get a real indication of a good character, instead of a female character who is bogged down in a cheesy love story. I also really like how there's more of an emphasis on her instead of Legolas.

The Bad:
The opening of the film feels a bit awkward due to the different music than in the original.
The Goblin Town chase has a few too many silly gags for my liking. I do like the "Cut the ropes!" gag, and the rock rolling down the hill, but Kili deflecting arrows with his sword, the swinging bridge, and the Goblin King's death are just too unrealistic. I spent most of the sequence waiting for you to cut back to Bilbo. Maybe a few extra trims would help make the action sequence feel more realistic and increase the tension.
The barrel sequence. I actually like the barrel sequence, I think it's a really awesome action set-piece; but I have the same issues with this sequence as I do with the Goblin Town chase. I would've left the sequence as it is, but cut out Bombur's barrel killing spree and Legolas balancing on Dwarf heads.

In closing, this is a solid edit which I found to be very enjoyable, it feels closest to what Jackson initially intended The Hobbit to be.

Do you recommend this edit?
Yes
Format Watched?
Digital
W
willosophicalwill 1 reviews
Report this review Comments (0) | Was this review helpful? 1 0