Brief Synopsis:
This edit was intended to be the “Requel that should have been”, a legitimate end cap to the original Superman Movies. My hope is that this will become your go to version, and great effort has been put in to make the story as seamless and engaging as possible. Enjoy!
Intention:
As a huge fan of the original Superman franchise I, like many others, felt that these movies deserved a solid finale. Superman Returns got us close, but there were issues with a bloated runtime, melodramatic characters, and anticlimactic resolution. This bold edit addresses those issues using every editing trick in the book to deliver the viewer a seamless movie experience with an exciting pace, appealing characters, and an engaging story with a satisfying ending. Superman Resolved is everything a successful Superman movie should be.
Special Thanks:
My wife, Kendra. Last Survivor, Neglify.
Release Information:
DVD
Special Features
Official trailer, Faneditor Commentary.
Editing Details:
My goal was to edit for dialogue to cut down on the melodramatic parts where the acting goes “over the top” so to speak, the idea being to improve the performances, make the characters more “true” and more appealing. My editing goal as far as pacing was achieved by trimming scenes throughout the movie, as well as re-sequencing entire sections of the movie to dramatically change the narrative.
Cuts and Additions:
I deleted the Vanderworth sequence where Luthor swindles the old woman out of her money. It was unnecessary to establish Luthor has money. In the original Superman movie, we cut in on Lex already well off, it's the same here. He's out of prison; he has means because he's the conniving Lex Luthor. No reason to show a detailed story of how he got a few bucks, it's uninteresting and keeps us from the action.

I cut in after the credits to Ma Kent cleaning up- I removed the gentleman caller as well as the shots of the board game that were in the foreground in order to not raise questions regarding who may have been there. In this edit she is alone, making Clark's return much more important.

I cut the entire memory sequence Clark has, it was unnecessary- having already been covered in the first movie and it seemed glommed on, like a lot of things in the original cut of this movie.

We first see Lex and crew in the boat on their way to the Fortress of Solitude, getting right to the action and the catalyst of the story.

Clark returns to work, Lex returns to the Vanderworth mansion to test the crystal.

The next sequence of the blackout/plane/shuttle catastrophe has been heavily edited for pacing, and to trim the awful dialogue that makes you begin hate Lois Lane. Hopefully these cuts help save her character from being annoying. I also cut Lois feinting and sliding down the plane ramp.

I did a couple of cuts during the exposition scenes during the "superman returns" sequence for pacing.

I cut the Superman as a creepy stalker, totally bypassed the scene at Lois's house and go directly from Lois leaving in the taxi to superman going to work fighting crime, because damn it that's what we want to see, and that stalker stuff is out of character for Superman.

I left the crime fighting sequence as is, it's one of the few sequences in the movie that didn't bother me.

After superman and Lois's interview, I cut directly to superman finding his Fortress of Solitude has been ransacked, and Lois gets to her blackout story and hits the road- edited for pacing and removed redundant information.

Lois gets on the boat much quicker with her son. Cut the cheesy, for-the-trailer dialogue "Lex Luthor", "Lois Lane", the characters saying each other’s names. It detracts from the drama and tension of the scene. Their visual reactions alone are ten times better.

I heavily trimmed Luthor’s exposition scene (where he yells “wrong!” etc.) down to the bare minimum so that the audience knows what’s going on without the melodrama.

This is where I diverge a great deal from previous fan edits. It doesn't bother me that Jason is Superman's son, just how they made him weak, just as the original edit of "Superman Returns" makes Superman too weak as well. In my version I totally cut out Richard's rescue sequence. Now Jason opens the door by himself, continuing with the idea that he has unlocked his superpowers instead of them being hit-or-miss like in the original. I edited in some shots of Superman sort of listening in on Jason's success and, knowing him and Lois are safe, Superman then leaves to confront Lex on the new Continent. It speeds up the pace of the movie, and makes Jason's character a lot more important- he saves him and his mother! -That ties in with the "Son becomes the Father and the Father becomes the Son" theme that is echoed throughout the movie.

I took airplane footage from all of the rest of the film and put together an “original” rescue sequence where Richard rescues Jason and Lois successfully after Jason gets Lois and himself out of the boat. This is a newer edit, it was necessary to bridge the most major gap on the narrative that my alternate story had, namely, the audience would have to make the leap that Lois and Jason make it home somehow. Now we know, and it took a lot of editing tricks to make it work, but much to my relief, it does.

The next big change I made is that Luthor no longer stabs Superman in the back with the Kryptonite shard. The whole freaking continent is infused with Kryptonite. So in this edit, Lex and his henchmen beat Superman within an inch of his life, and Lex throws Superman over the cliff. This results in being able to cut out an entire unnecessary sequence of the movie and increase the pacing while decreasing the bloated runtime.

Superman has a baptism/rebirth in the ocean takes to the air and rejuvenates in the sun, then goes right into the climax of the story, where he lifts the entire continent and hurls it into space. I cut the whole airplane rescue of superman and pulling out the dagger sequence, of course, because Jason and Lois are now rescued, and superman never gets stabbed.

I heavily edited/trimmed the resolution sequence after Superman launches the Kryptonite continent into space. In my first go, I had cut the entire sequence of Superman falling to Earth and the Hospital, but it left the ending a bit anti-climactic, so I went in and heavily edited the sequence, and I mean heavy! Technically it worked out to be one of the best parts of the movie, and it seamlessly bridged a narrative gap that the first version of the edit created.

After Superman visits his son in the bedroom I cut having Jason run to the window and yell "Goodnight Superman" because it really detracted from the mood of the scene.

Other various pacing and dialogue edits throughout the movie.
Cover art by b3nmitchell (DOWNLOAD HERE) 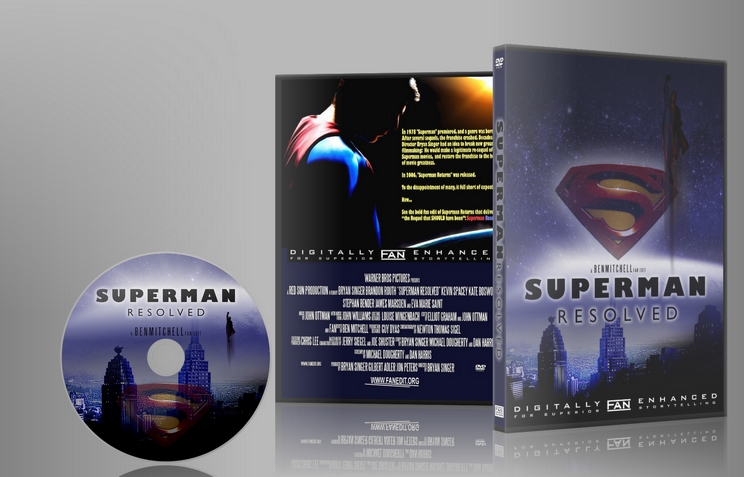 11 reviews
9-10 stars
36%
7-9 stars
55%
5-7 stars
9%
3-5 stars
0%
1-3 stars
0%
Overall rating
8.4
Audio/Video Quality
9.6(11)
Visual Editing
9.0(11)
Audio Editing
9.0(11)
Narrative
8.4(11)
Enjoyment
7.9(11)
View all user reviews View most helpful
October 20, 2013
Overall rating
7.0
Audio/Video Quality
10.0
Visual Editing
8.0
Audio Editing
8.0
Narrative
7.0
Enjoyment
6.0
Good, but not great - but that's more an indictment on the original movie than on the editor. B3nmitchell has made a tremendous effort to save this movie - and I could watch it all the way through, which I couldn't do with the original.
Good job.
The only edit problem I found was the finale being quite bitty, with Marsden's character suddenly arriving and loading Lois and son into the plane. And then Superman being thrown off the island, then suddenly recovering (why?).
The reveal of the son of Superman was also very out of left field and didn't really work in this edit.
But I couldn't really think of any other way to save the movie -except maybe to remove Marsden's character entirely? Then the son of Superman would be more obvious.
Anyway, well done b3nmitchell. My kids enjoyed it! :-)

Do you recommend this edit?
Yes
Format Watched?
DVD
D
dangermouse Top 500 Reviewer 23 reviews
Report this review Comments (0) | Was this review helpful? 0 0
May 05, 2013
Overall rating
9.8
Audio/Video Quality
10.0
Visual Editing
9.0
Audio Editing
9.0
Narrative
10.0
Enjoyment
10.0
Well this certainly was an invigorating edit to watch. I wasn't much of a fan of the original, mostly due to lack of action and an annoyingly written Lois, but I believe this to be the best version of this film I have seen. I agree with ALL the cuts made, they really made sense to me (though one of them was a bit jarring) it wasn't too noticeable. I applaud b3nmitchell's dedication and thought to the pacing of this edit. I quite enjoyed it!

Do you recommend this edit?
Yes
Format Watched?
DVD
W
wyndorfdave Top 100 Reviewer 52 reviews
Report this review Comments (0) | Was this review helpful? 0 0
May 01, 2013
Overall rating
7.3
Audio/Video Quality
8.0
Visual Editing
9.0
Audio Editing
7.0
Narrative
7.0
Enjoyment
7.0
As many of my fellow forum members know, I LOVE SUPERMAN! LOVE HIM!!!
After a certain bionic astronaut, he is my ultimate hero.

And I even enjoy SUPERMAN RETURNS. I don't love it as much I want to, but I do appreciate it for some wonderful moments.

I have watched many Superman Returns fan edits over the years, and I can say this latest one is very good. Not perfect, and not my preferred fan edit, but it is good.

The editor shows strong storytelling ability, trimming much of the fat and exposition without losing the emotional core of the story. Lois is slightly less annoying which is very good. I think Lex may have been slightly over edited, but Spacey's performance is a tricky balancing act to edit with his mood swings from menacing to over the top ham. Also, I missed that there was no sense of closure for Lex in this version.

The boldest portion of the edit is the final act and while I like the concept, I am afraid for me the execution does not work. It is choppy and is betrayed by uneven audio changes and cuts. I give kudos for attempting the idea but there was just not enough source material to make clear to me as a viewer what was happening.

The video quality was very good but I noticed a few places where the audio transitions or fade-ins could have been smoother.

All in all, a nice piece of work from a very promising new editor. I look forward to see what he does next. :)

Do you recommend this edit?
Yes
Format Watched?
DVD
H
hcmisfit61 1 reviews
Report this review Comments (0) | Was this review helpful? 0 1
March 29, 2013 (Updated: March 31, 2013)
Overall rating
6.1
Audio/Video Quality
9.0
Visual Editing
9.0
Audio Editing
9.0
Narrative
7.0
Enjoyment
4.0
Well watching this edit accomplished one thing for me. I NEVER want to watch this movie, ever again. This is no fault of the editor. Its just that the source material is so screamingly boring. I know the pacing was set to mirror the pacing of Superman, the Movie, but it just drives me nuts. Some movies can be watched over and over. This is definitely not one of them.

Regarding the Edit. All of the audio and video edits seemed seamless except when Lex pushes Superman over the cliff. Maybe it feels like an edit because it plays so different from the original. This edit choice is my only gripe among the editor's choices. I would prefer to leave the shanking of Superman in the movie. Lex would not take Superman for granted; just being satisfied to beat him up and push him into the sea. That is the main reason I gave a 7 on the narrative.

I apologize for ranking my enjoyment so low, but I really do hate this movie.