Brief Synopsis:
Perhaps the most exhaustive and complete reworking of Superman II to date. Combining footage from the original Lester cut, the 2006 “Donner Cut” and selected footage from Superman The Movie, along with extensive special effects corrections, this is the movie that Richard Donner never got to make, the movie you always wanted.
Intention:
To improve on my first edit of Superman II. To create a cut that I can watch instead of the Donner cut, and as an alternative to the Theatrical Cut. To tie in with STM more closely than either the DC or LC. 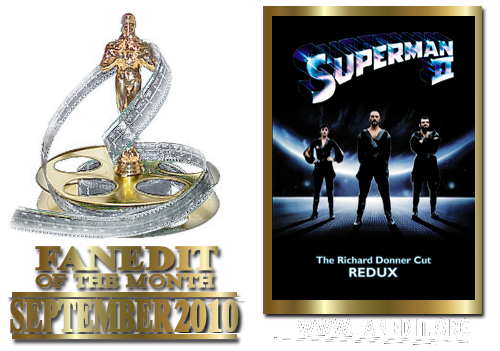 Format Watched?
Digital
D
dirtycop1036 Top 50 Reviewer 63 reviews
Report this review Comments (0) | Was this review helpful? 0 0
July 08, 2022
Overall rating
8.3
Audio/Video Quality
8.0
Visual Editing
8.0
Audio Editing
8.0
Narrative
7.0
Enjoyment
9.0
Quality as good as can be expected, a couple of edits (audio and video) stood out a little but none majorly so.

A very accomplished edit, definitely an improvement on either of the two main official versions. However I am not entirely sure if mixing certain elements of the Lester and Donner cuts, mainly the story of Lois realising Clark is Superman, work too well. In the mentioned case, she seems to forget her initial discovery (between her doodling on the newspaper and the two of them chatting at Niagara Falls before the boys is rescued) and decides to test him with the blank bullets after he seemingly proved his lack of powers during the river scene.

As for improvements, the ending is probably the most visible, am frankly surprised that this was not considered in 2006! Turning back time in STM is iconic to me, but just felt lazy when done again in the Donner Cut, as if that is how Superman can always solve a problem whereas here it felt like the villains escape could be a consequence of that "fix".

Do you recommend this edit?
Yes
Format Watched?
Digital
P
paranoidandroid Top 50 Reviewer 58 reviews
Report this review Comments (0) | Was this review helpful? 0 0
December 31, 2020 (Updated: December 31, 2020)
Overall rating
9.7
Audio/Video Quality
9.0
Visual Editing
10.0
Audio Editing
10.0
Narrative
9.0
Enjoyment
10.0
This edit was extraordinary! Most of all, I love the ending. Frankly, it's a miracle that booshman was able to craft a satisfying ending to Superman II - through the use of editing no less! I also appreciate that the blank bullets scene is left in (to heck with continuity!) and how the rocket scene from the end of SM1 is use to connect to SM2's story in this edit. This edit, more than any other I've seen, really shows the possibilities of fan edits to improve and transform the existing material into something even greater. Thanks booshman - highly recommended!

Do you recommend this edit?
Yes
Format Watched?
DVD
D
detectivestrange Top 500 Reviewer 5 reviews
Report this review Comments (0) | Was this review helpful? 3 0
February 05, 2019 (Updated: February 05, 2019)
Overall rating
8.8
Audio/Video Quality
10.0
Visual Editing
8.0
Audio Editing
10.0
Narrative
10.0
Enjoyment
8.0
One of the all time classic Superman 2 edits, this is the best of both worlds, Lester and Donner's best moments mashed together to form a coherent and consistent take on the definitive superhero movie sequel. I had a nostalgic blast watching Reeves, Kidder, Hackman and Stamp all take charge in their respective moments to captivate the viewer. The edits are sound, the audio mixing strong, the visual mixing sometimes is a bit of a see-saw, but when they work, they work.

I love the alternative ending too, audio mixing aside it ought to have been inserted to give the edit a more unique flavor.

If you can track this down, give it a go. This is a blueprint for how to develop a passion for fanediting and it sets the standard for what your project should aspire to be more like. If you can top this, you've got it made.
Z
zarius Top 50 Reviewer 122 reviews
Report this review Comments (0) | Was this review helpful? 1 0
December 12, 2016
Overall rating
9.8
Audio/Video Quality
9.0
Visual Editing
9.0
Audio Editing
10.0
Narrative
10.0
Enjoyment
10.0
i had this movie a long time ago, but my HDD crashed, but for a while i actually thought this was the original cut of the movie, i enjoyed it tremendously