Brief Synopsis:
This is a totally different, alternate version of the movie. It was created using both the Lester and the Donner cut.
Intention:
This version is not an extended “best of both worlds” cut. I wanted to try something a little different using the wealth of footage out there. I chose the title Deja Vu because in my cut, Superman turns back time right after the Metropolis battle. Then events repeat in a different way, starting with the villains released in the Paris sequence. Ultimately, Superman must face his problems rather than escape them by turning back time again.
Release Information:
Special Features
Special Lester Cut (Parody) 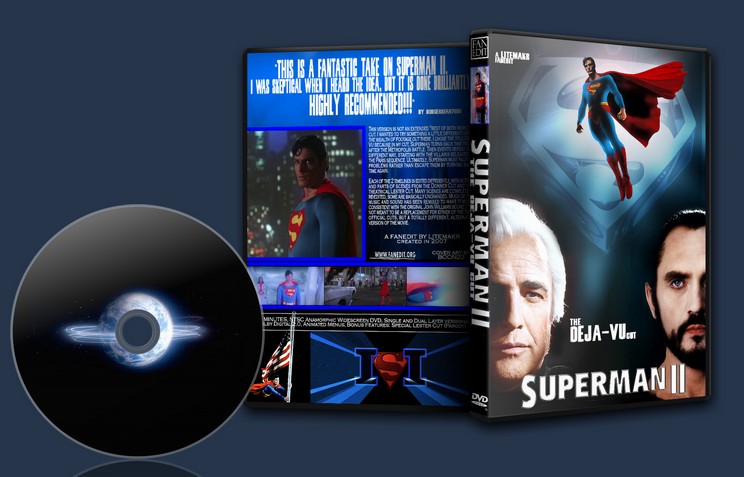 My favorite part about this edit is how it has a new theme, that things will always happen in some way shape or form, and destiny does call your name. Well done!

I think this is very fun and creative. There are some small edits I was very appreciative of — changes to Lois falling from the Planet building, the removal of the super-breath from the Metropolis battle, and — if I’m recalling correctly — the removal of the toilet flush sound from the Fortress.

Unlike the other Superman II re-cuts, you’re not looking to replace Superman II, you’re just giving us a fun, new take. And you achieve that. This is especially perfect for those who like the Lester cut (I’m actually not part of that crowd…even as a young boy I didn’t like much of the Lester cut [the pink bear scene was always bothersome, as were lots of other parts...yet somehow still loved the film overall. Kids are very forgiving]). The addition of Lara in the Fortress scene when Superman has is powers removed is utter genius. The re-edit of the White House scene (in your second half), with the quicker pacing, is also terrific.

What doesn’t work, however, is that since Superman is aware that he turned back the world to avoid the evil villains coming to Earth, having him release them accidentally the second time around kind of implies that Superman is a complete doofus. If there was some way to have them escape OUTside of Superman’s involvement with the Paris bomb in the second go-round, that is to say, if something somewhere else occurred while Supes was in Paris, then perhaps this major plot point could be overlooked. But, hey, this is still a fine piece of work. And, it should be pointed out, you’ve done some really smart, tight editing.
P
phlegmbot Top 500 Reviewer 12 reviews
Report this review Comments (0) | Was this review helpful? 0 0
September 08, 2012 (Updated: September 11, 2012)
Enjoyment
8.0
Review by zackepple — December 15, 2009 @ 12:34 am

What an awesome version of Superman 2. This seems to be overlooked a lot and it so should not! Litemakr: great job! Thank you.
R
r8s8fr8 Top 100 Reviewer 48 reviews
Report this review Comments (0) | Was this review helpful? 0 0
View all user reviews