Star Wars: Heir to the Force

Brief Synopsis:
The Dark Side of the Force has awakened. Risen from the ashes of the Empire, the First Order seeks to destroy the New Republic and once again shroud the galaxy in darkness. The mysterious Kylo Ren has extinguished the new Jedi order. Without the guidance of the Force, who will stand and resist against this growing threat?

Where other edits have changed the sequences surrounding Starkiller Base (Hal9000) or simply attempted to minimize over the top humor (ironman23), this edit leaves the key sequences in place, is more aggressive in it's edits to remove silliness and extends Kylo Ren's parentage reveal as well as gently addressing the issue of R2-D2 being asleep and Snoke's non-Star Warsy looking hologram. This edit also removes the distraction of Luke from the end of the movie.
Intention:
I remember enjoying this movie in the theaters when I first saw it, but felt that Abrams missed out on the opportunity to extend the mystery surrounding Kylo Ren. I remember being very disappointed when Kylo's parentage was revealed so early and so casually in the film. The main intent of this edit was to prolong Kylo's reveal, remove as much of the Rathtar sequence as possible, and remove Rey finding Luke from the end of the movie to mirror the ending of TESB. As the the edit progressed and feedback was given, the challenge to add a hologram effect to Snoke as well as the creation of a new crawl, title, and Falcon turret sfx.
Other Sources:
Star Wars: The Force Awakens Bonus Disc (Deleted Scene)
Star Wars: The Force Awakens Soundtrack
Star Wars: A New Hope Soundtrack
Star Wars: The Force Unleashed 1&2 Soundtracks
Star Wars: The Force Awakens Official Trailers
War of the Worlds Soundtrack
Custom Crawl Creator
Soundboard & Game rip sfx (F11D-Blaster, Tie sfx,, Falcon turret, X-Wing sfx, etc.)

Walt Disney and LucasFilms ltd and the fanedit.org and originaltrilogy.com communities.

Most of all to my family, who put up with me through this whole process. 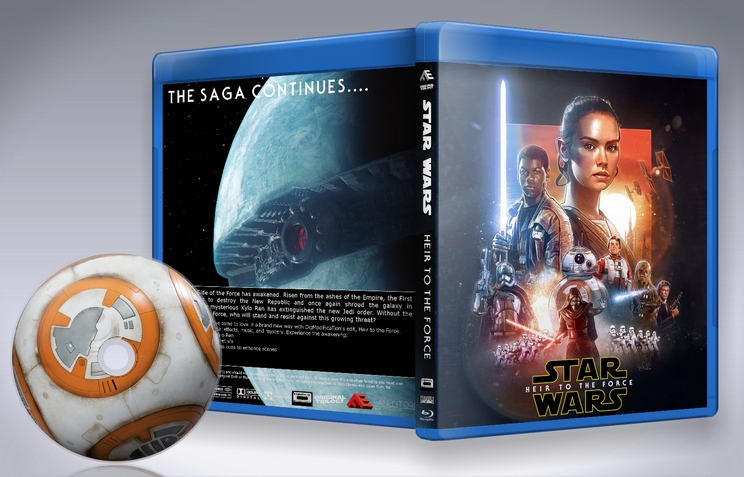 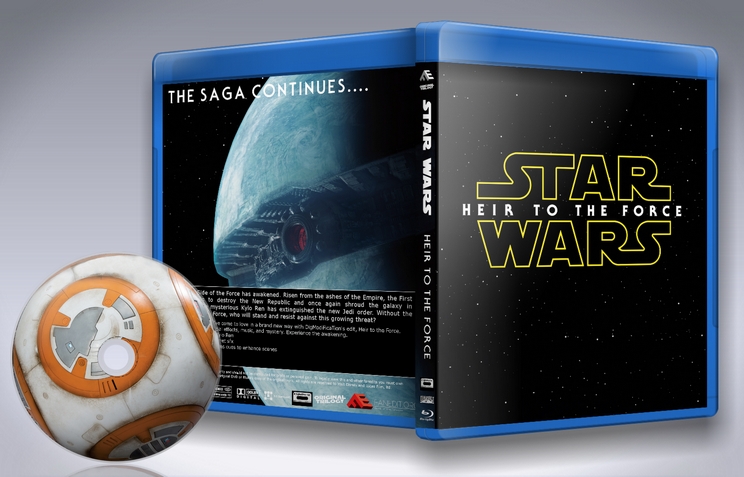 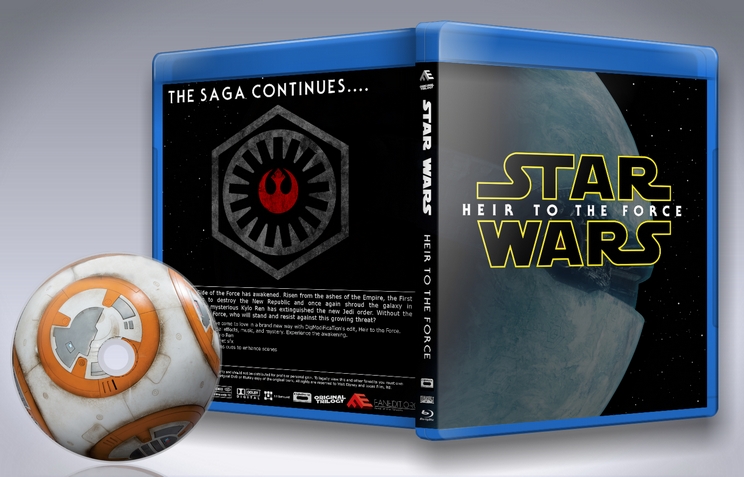 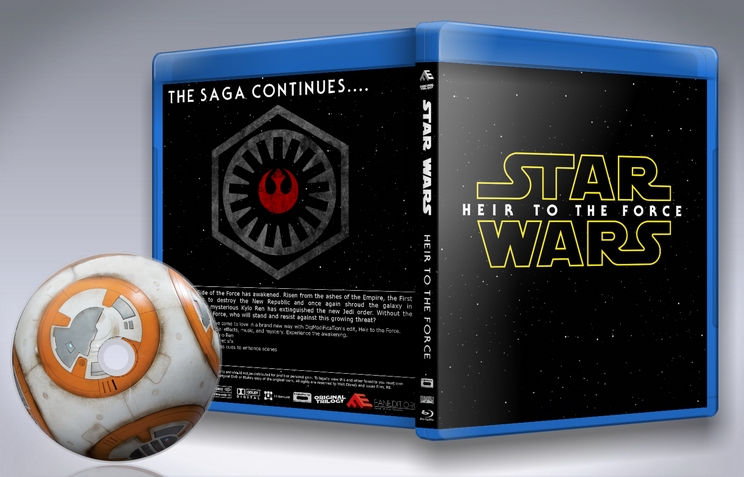 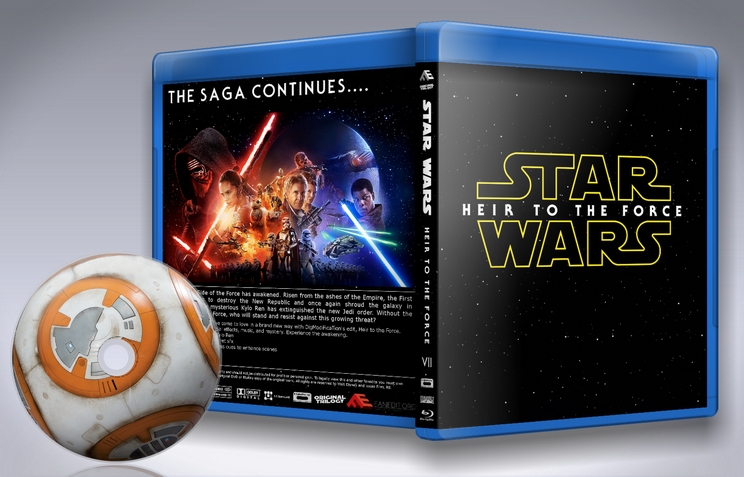 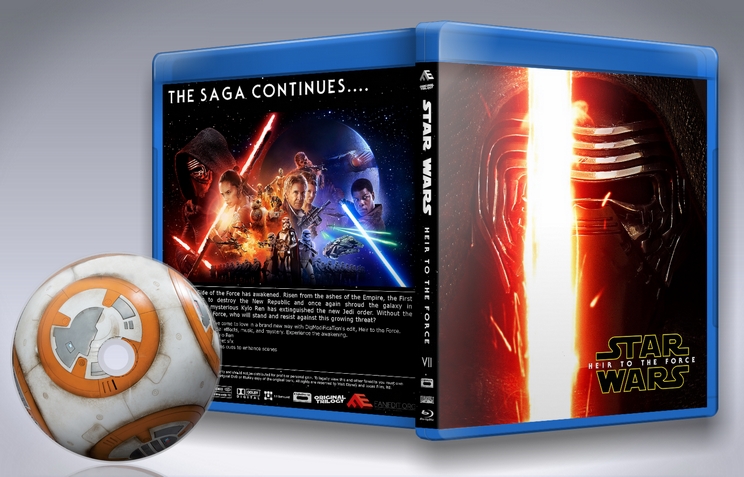 In terms of structure, I still prefer Hal9000's cut in terms of moving the destruction of the Republic to the climax of the film, casting the entire film in a more doomed, darker light that sets up the sublime nightmare that is The Last Jedi. However, Digmod's cuts/tweaks are simultaneously more subtle and more profound in terms of the overall film. In my perfect world, a hybrid could be made between these two versions, but until then I'm happy to keep both on my shelf and flip a coin as to which one I'll pop in during a rewatch.

Do you recommend this edit?
Yes
Format Watched?
Digital
R
recordwrangler95 Top 50 Reviewer 79 reviews
Report this review Comments (0) | Was this review helpful? 0 0
February 16, 2021
Overall rating
9.7
Audio/Video Quality
9.0
Visual Editing
9.0
Audio Editing
9.0
Narrative
10.0
Enjoyment
10.0
Liked all the changes. Definitely more enjoyable than the original release. Favorite part is Kylo Ren character benefits from later reveal.
Like you mentioned before most of the humor you cut improves the pace and feel.
Can't wait to see more of your star wars changes.

Do you recommend this edit?
Yes
Format Watched?
Digital
A
andrws2 Top 500 Reviewer 5 reviews
Report this review Comments (0) | Was this review helpful? 1 0
November 27, 2020 (Updated: November 27, 2020)
Overall rating
9.2
Audio/Video Quality
10.0
Visual Editing
10.0
Audio Editing
9.0
Narrative
9.0
Enjoyment
9.0
HUGE Star Wars fan here. After seeing TFA in theaters I was not overly impressed, but didn't hate it either. A very safe and simple story, but I thought it was a decent launching pad for the rest of the trilogy. After 8 & 9 I grew to despise 7 as much as those two since I didn't feel any payoff as the trilogy went on.

I have watched a few other fan edits of 7 looking for something I can stomach, and this is it. Pairing this film edit with the DonKamillo Anti-Cringe movies to follow actually makes this movie a good watch.

A/V Quality: Perfect to my eyes, didn't notice anything there which gives that area a 10.

Visual Editing: I didn't see anything jarring here either. This is an easy 10, especially due to the Kylo helmet fixes which added a LOT to this movie.

Audio Editing: This would be an area I'd knock down, but only by a little by giving it 9. I think the added Kylo helmet scenes were slightly noticeably different than the original voice effect. I praise the effort and the idea and still am very glad it was included, but in a future version I'd try to refine the effects on Kylo's voice in those few scenes. Aside from that, maybe a few uncomfortable audio spikes but I honestly couldn't say whether or not the original film was like that as well.

Narrative: Vastly improved over the original narrative. Trimming the Rathtar scene works incredibly well, and overall cutting a few of the more cringe-y lines helps the tone overall. The main improvement is definitely the way Kylo was handled though. No longer a petulant child, he is now a menacing figure up until the very end when you see him crack. Kylo was actually pretty terrifying and this edit has a darker tone which helps its narrative a lot. I'd give the narrative a 9 as I have seen edits of moving around the Hosnian Prime destruction to later in the film which I think really works, but the soundtrack additions in this edit do help that scene over the original as well.

TLDR;
Near perfect and my go-to version of this movie now. Vastly improved over the original, especially in terms of the Kylo story and removing some of the insufferable lines. Could use a little touchup on audio in a few places and perhaps even go farther with the narrative overhaul. Easily the best TFA edit I have ever seen.

Do you recommend this edit?
Yes
Format Watched?
Digital
A
acbagel Top 1000 Reviewer 3 reviews
Report this review Comments (0) | Was this review helpful? 1 0
November 25, 2020 (Updated: November 25, 2020)
Overall rating
9.3
Audio/Video Quality
10.0
Visual Editing
10.0
Audio Editing
10.0
Narrative
9.0
Enjoyment
9.0
Like other reviewers I watched this in the cinema and came away feeling somewhat betrayed. While nothing can ever make these films canonical, this cut has at least made this particular entry more watchable.

Not much could be done about the unremarkable characters, those cringy angled shots of boring Rey towering over a cowardly Fin. The safe narrative which echoes a New Hope is still there but less blatant . But this is a review of the edit, not the source material and until AI improves to the point we can more easily replace entire characters and render new scenes, this is close to as good as it will come for now.

I will reserve a perfect 10/10 score, not because this does not deserve it, but to leave room to see what Don Kamillo may pull off with a definitive Anti-Cringe cut. There is still some cringe I would like to see liberated. Perhaps AI could one day be trained to replace Rey with Nausicaä? This movie has now gone from mediocre Woke Wars to a semi-decent Star Wars FanFiction. The cut is worthy of praise.

It did everything it set out to do to a superb degree of polish and exceeded the original in every way. It is currently my definitive way of experiencing this first entry into the sequel trilogy. Expressing sincere thanks to DigModiFicaTion, may the force be with you!

Do you recommend this edit?
Yes
Format Watched?
Digital
M
metsatron Top 500 Reviewer 4 reviews
Report this review Comments (1) | Was this review helpful? 1 0
October 03, 2020
Overall rating
9.0
Audio/Video Quality
9.0
Visual Editing
8.0
Audio Editing
10.0
Narrative
9.0
Enjoyment
9.0
The Force Awakens was by far my favorite of the Sequel Trilogy, but even my terrible taste in movies (I still think Captain Marvel's a decent movie) can point out the film's faults. This edit really goes the extra mile in alleviating those faults when possible, and softening the blow in cases where the problem is unavoidable. Kylo Ren is far more intimidating, the buildup to his past and face reveal are much better handled, and the added audio cues add some weight to the scenes in question. There was one scene in particular, however, that I don't quite get. In one scene, BB-8 has a moment with R2-D2 that I don't quite understand. Was BB-8 trying to communicate with R2, who was too busy piecing together a map to Luke's whereabouts? I'm not sure. Yes, Rey is still something of a Mary Sue, but I feel this edit manages to make her OP-ness just a little less jarring. Either that, or my suspension of disbelief for sci-fi fantasies is just a little too broad for me to have a valid opinion. Regardless, I recommend that people not only watch this edit, but accept it as their headcanon, because all Disney cares about is Woke Twitter.