Brief Synopsis:
It’s the same Star Wars: The Last Jedi you pondered over, cleared of distractions. The trip to the casino of Canto Bight is truncated, the Caretakers of Ach-To are removed, and a few scenes are rearranged, allowing Rian Johnson’s story to shine. Strap in for a contemplative journey not experienced since The Empire Strikes Back.
Intention:
To address a few standout issues about the film which distract from its focus. This is a fairly conservative edit, doing what is possible to streamline the film without radically altering it.

This is intended as constructive; I enjoy TLJ quite a bit and, given my history with producing fan edits, it was inevitable that I would attempt something like this. What this project is NOT intended as is an indictment of Disney or Rian Johnson. Rather, this is my way of engaging with the film and putting a slight spin on it.

This film subverts audience/fan expectation at many points. While this edit doesn't seek to reverse this, some instances of this were addressed in order to (hopefully) allow the film to do this while still feeling like part 8 of a 9-part story.

Regarding General Hux: It is not my intention to "rescue" this character, as he is rightfully played as a youthful, arrogant Neo-Nazi buffoon. The changes made to his character in this edit are intended to allow him to remain somewhat threatening, at least up until Kylo Ren takes over as Supreme Leader toward the end.

The humor in this film has been pruned, though a great deal of humor has been retained. Star Wars has always relied on humor, though has never strayed into Spaceballs territory. For example, as much as I enjoyed the "iron/spaceship" gag, it felt like something from a parody of Star Wars rather than something within it. This was my guideline. Humor is very subjective, so I attempted to thread the needle as best I could.

This edit does not attempt to alter Rey's character in any meaningful way. Her natural talent for using the Force and heroic escapades are necessary to get the film's story in motion. Her triple-TIE combo shot was removed from the battle of Crait in the conventional interest of "less is more," and is not intended as a commentary of Rey herself. Also, the removal of a single detail during Kylo Ren's conversation with her about her parents is not intended to in any way alter the fact that her parents were "nobody," but merely to address a potential continuity oddity when compared to TFA depicting her parents as leaving Jakku in the process of abandoning her.

- Added Rey’s voice calling out to Finn immediately prior to him waking from his coma, to gently tie into his Force sensitivity that was not bridged between TFA and TROS (Thanks to poppasketti)*

- Removed Luke’s quip about Jakku being “pretty much nowhere”

- Removed Rose responding to Finn’s MTFBWY with “…you too”

- Tightened Finn and Rose’s reaction to Maz’s line “Oh yes, he can” for slightly better timing

⁃ Removed both appearances from the ‘Caretakers’ on Ach-to (with a visual effects shot courtesy of OT.com user snooker)

⁃ Trimmed away the lone porg who gives Chewie the doughy eyes, though leaving the joke intact otherwise

⁃ Removed Luke’s line to R2, “Nothing can make me change my mind.”

⁃ Cut down the first sequence at Canto Bight to focus on finding the codebreaker. For V3, reinstated a modified version of the balcony scene overlooking kids and horses being beaten, though removing strong hints that Finn and Rose will be able to act upon the town before they leave

- Made it appear as though Finn and Rose follow DJ out of the cell, briefly elude the guards, and the scene ends. Next time we see the trio, they are already in hyperspace (also removing the implication in the later scene that BB8 helped steal the ship).

- Added a center wipe transition from the scene with Finn, Rose, and DJ in hyperspace to the fleet losing their medical frigate

- Used a few shots from a deleted scene to remove the iron/spaceship gag, which borrowed from an old spoof which laughed at Star Wars rather than along with Star Wars (film speck removed by OT.com user poppasketti)

- A puff of blue smoke rises from Snoke right after he is cut in half, out of focus in the background, providing a very subtle clue about his nature (Borrowed with permission from poppasketti, though I did not use the flash of red Sith eyes as he is stabbed)*

⁃ Removed the detail from Kylo Ren that Rey’s parents are buried in the Jakku desert, as this seems at odds with the vision we saw in The Force Awakens and further details revealed in The Rise of Skywalker.

- Thanks to poppasketti, removed Finn’s duel with Phasma, having added BB8 accompanything Finn and Rose to the shuttle unimpeded. Phasma’s corpse has been added to the foreground to complete the scene. Special effects during the deleted scene with Finn and Rose on the shuttle have been spruced up further by poppasketti for V4, including adding floating debris and fixing the perspective of the planet*

⁃ Moved the scene with Luke and Yoda to immediately prior to Leia looking out over Crait (using audio and video provided by OT.com user Darthrush)

⁃ Removed Finn’s line about the battering ram canon being “old Death Star tech,” and reinstated Poe’s line, “A what now?”

⁃ The crate Luke sits on as he talks with Leia is now stationary and motionless, unaffected by him (effect provided by OT.com user poppasketti)

⁃ Removed Rey’s triple-TIE combo shot, with the Falcon’s involvement in the battle being first revealed with its shadow sweeping by and a single TIE being shot down

⁃ After Rose saves Finn, removed her line about not “fighting what we hate” and “saving what we love.”

- Removed spot on the sun as Luke gazes out after collapsing, which caused some presumably inadvertent misdirection for some upon first viewing (courtesy of OT.com user poppasketti)

- The shot of the rebel alliance insignia ring at the very end has been removed, since it ties into a sequence removed from this version of the film (thanks to poppasketti)*

- Snuck in a Wilhelm scream... somewhere in the movie.
Cover art by Hal9000 (DOWNLOAD HERE) 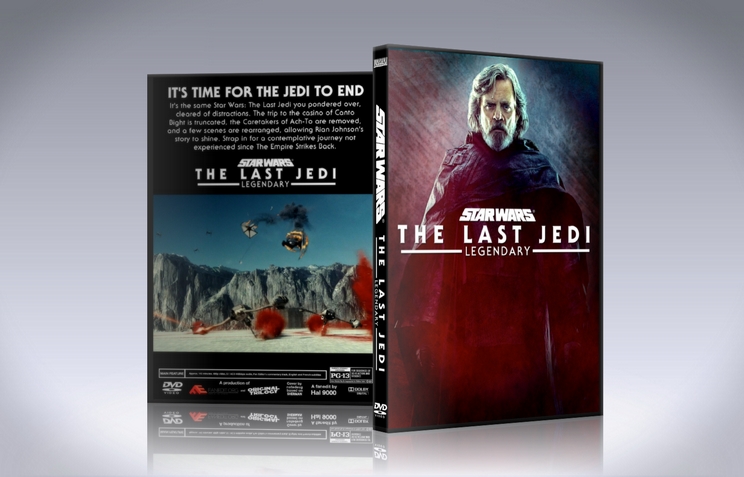 You've pretty much corrected everything that was possible without completely ruining the overall story and structure. So, as always great work.
The movie comes out so much more easy to watch, and the great moments it already had can really shine. My favorite from sequel trilogy, by far.

Thanks again for this really nice edit and french subtitles also.

Do you recommend this edit?
Yes
Format Watched?
Digital
A
artorias117 Top 500 Reviewer 8 reviews
Report this review Comments (0) | Was this review helpful? 0 0
May 27, 2022
Overall rating
10.0
Audio/Video Quality
10.0
Visual Editing
10.0
Audio Editing
10.0
Narrative
10.0
Enjoyment
10.0
I quite loved the theatrical cut of The Last Jedi but even I will admit that the 2nd act is too much of a slog and has diminished my appreciation for the film upon subsequent viewings. Thankfully, Hal9000 has done it again and provided me with a better alternative that addresses all of my problems with that pesky 2nd act. Well done

Do you recommend this edit?
Yes
Format Watched?
Digital
B
bored-at-300am Top 500 Reviewer 8 reviews
Report this review Comments (0) | Was this review helpful? 0 0
September 21, 2021
Overall rating
10.0
Audio/Video Quality
10.0
Visual Editing
10.0
Audio Editing
10.0
Narrative
10.0
Enjoyment
10.0
Although I'm solidly in the "pro-TLJ" camp, there were definite problems that I had with the film, largely to do with Rose's character and the humour (which seemed more at place in a Marvel movie that in Star Wars) and this edit smoothes out nearly all of my problems. This will be my "go-to" version to watch from here on out. (In fact, with a bit of splicing in from the TFA trailer, as a "previously on..." you could almost call this version "Star Wars: The Epilogue" and have it stand completely on its own from the Abrams-directed entries. But I'll withhold making that fan edit myself until I get my eyeballs on Hal9000's cuts of those films!)

Do you recommend this edit?
Yes
Format Watched?
Digital
R
recordwrangler95 Top 50 Reviewer 106 reviews
Report this review Comments (0) | Was this review helpful? 0 0
April 03, 2021
Overall rating
9.3
Audio/Video Quality
10.0
Visual Editing
10.0
Audio Editing
10.0
Narrative
9.0
Enjoyment
9.0
As good as HAL's "Force Awakens" edit. If you liked that, you'll like this one, too. As always, there are a few narrative choices where I would have zigged where he zagged, but this isn't my edit, it's his. Kudos to him for seeing his vision through!

It has been more than a year since I watched The Last Jedi so I was not hung up on what was removed or changed. I was able to watch it as a movie, not as a fanedit. And as a movie it was terrific. I thoroughly enjoyed it. Well done!