Star Wars - Episode I: Return of the Sith: Revisited Edition

Brief Synopsis:
A long time ago, in a galaxy far, far away…

It is a time of peace. For one thousand years, the esteemed Order of Jedi Knights has protected the Galactic Republic by wielding a mysterious power called the Force. Now a new threat is rising, as an alliance of star systems known as the FEDERATION has surrounded the defenseless planet of Naboo with a blockade of deadly battleships. Hoping to prevent war, the Supreme Chancellor of the Republic has dispatched Jedi Master Qui-Gon Jinn and his apprentice Obi-Wan Kenobi to settle the conflict.

Yet during their mission, the Jedi will encounter dangers that could lead to the end of the Galactic Republic, as well as the Jedi Order itself…

Intention:
“Return of the Sith: Revisited Edition” is meticulously designed to re-envision Episode I as a proper beginning to the epic six-part story of Anakin Skywalker.

It is a time when the Jedi and Galactic Republic are at the peak of their power.
It is the moment when the Sith and the Dark Side of the Force re-emerge after being dormant for one thousand years.
And most importantly, it is when we meet young Anakin Skywalker, a boy strong with the Force, whose clouded future portends great danger. 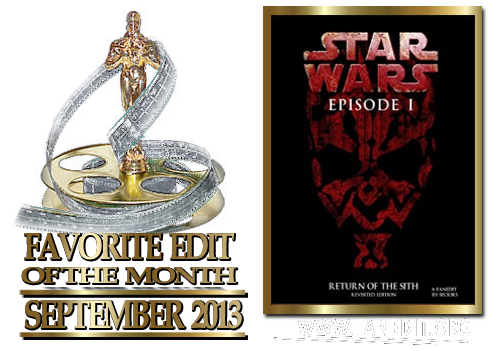 Editing Details:
To expand on what has already been said in my intention, my goals are to:

• Provide a streamlined and engaging story that introduces us to the Star Wars Universe, where the magic and mysticism from the Original Trilogy (OT) take precedence over complicated plotting, politics, and CGI characters.
• Focus on giving the audience a clear introduction to the Jedi and the Force; even if not fully explained, there should be enough information via the Crawl, dialog, and actions to make a clear impression on the audience about who the Jedi are and what they can do, due to “the Force.”
• Change the Trade Federation to just “The Federation.” This change is meant to reduce the politics involved with the PT. The Federation now is a rogue group that eventually evolves into the “separatist” movement in my Episode II.
• Make the identity of the Emperor a true secret until Episode III. Thus, Lord Sidious does not appear in this edit, making the appearance of the Sith as much a mystery to the audience as they are to the Jedi.
• Present Anakin as a strong with the Force, with great compassion and feeling for others… but also is clearly perceived as dangerous to train as a Jedi.
• Highlight the beginnings of the future romantic relationship between Anakin and Padme.
• Plant the seeds for future understanding of why Naboo was attacked in the first place by the Federation (hint: Palpatine’s power grab to become Chancellor is what starts the ball rolling, and is the only thing we learn in this episode.)
• Adhere to the spirit and style of the OT as closely as possible, remembering that the audience includes both those who are young as well as those who are young at heart.
• Help link the PT with the OT by introducing characters that span across them: R2D2 & C3P0; Jabba the Hut; Greedo; Obi-Wan; and of course, Yoda.
• Remove as much bad humor, bad acting, boring politics, and Jar-Jar as possible, yet still retain a strong sense of story that leads directly into my Episode II.

Note: Changes specific to the Revisited Edition are prefaced with “RE:”

General, Edit-Wide Changes:
• Lord Sidious does not appear in the movie. This is so that the “reveal” that Palpatine is Lord Sidious does not take place until Episode III. It also greatly simplifies the plot. The Federation (e.g., the Viceroy) has apparently acted on their own accord in trying to take over Naboo. This also makes Darth Maul’s appearance more mysterious and menacing.
• Jar-Jar is cut to the absolute minimum; even the underwater city visit is completely gone. His lines and antics are extremely cut down throughout the movie. Basically, if it could be cut without affecting the plot or damaging the visual/audio, it has been cut.
• Removal of all mentions midichlorians, “chosen one,” virgin birth.
• Battle droids do not talk (except just once)
• No ‘yipee’s or ‘oops’s from Anakin.
• Politics in general have been greatly reduced.
• The Pod race greatly shortened, and only follows Anakin around the track.
• Completely revised final battle sequencing, to make the true climactic moment be the Jedi Battle with Maul, and the death of Qui-Gon.
• RE: Now in 1080p HD!
• RE: The audience is allowed to view Palpatine as a bit more manipulative now, though in this narrative we merely see his motives as a pure power grab to become chancellor. There still is no hint or way to link him as a Sith Lord.
• RE: Further focus on the notion that fear of loss will be Anakin’s downfall.
• RE: Remove the use of “Darth” for anyone except Darth Vader. 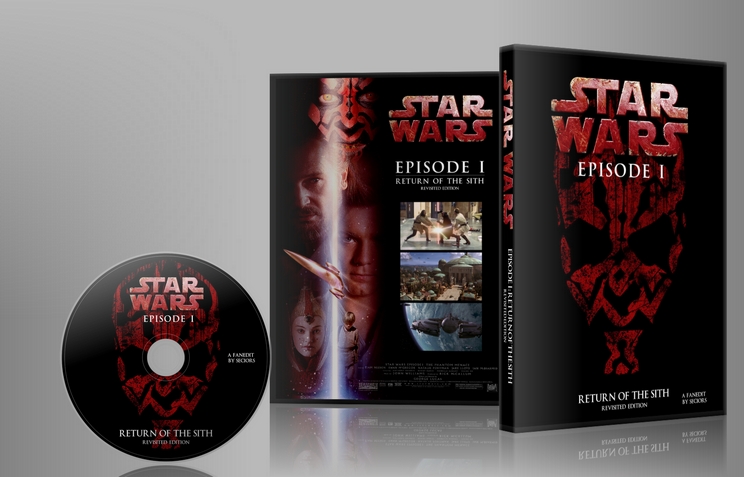 25 reviews
9-10 stars
80%
7-9 stars
20%
5-7 stars
0%
3-5 stars
0%
1-3 stars
0%
Overall rating
9.3
Audio/Video Quality
9.8(25)
Visual Editing
9.7(25)
Audio Editing
9.6(25)
Narrative
9.1(25)
Enjoyment
9.2(25)
View all user reviews View most helpful
December 20, 2020
Overall rating
9.3
Audio/Video Quality
10.0
Visual Editing
10.0
Audio Editing
10.0
Narrative
9.0
Enjoyment
9.0
This is a great example of fanediting, and it eliminates just about everything that can be eliminated while still retaining what is important. Some people claim that the cutting down of the dialogue hurts the characterization, especially of Qui Gon, however, I feel like 90% of the problems with this movie is that the character talk to much, especially Qui Gon. He does not feel like a Jedi Master, but a crotchety old man who gets upset and snippy every time someone questions his "great wisdom". This edit manages to jetison most of that, so in my book it improves the character tremendously. I stand by my opinion, how ever, that the Jedi of this era are not to be liked are are to look like fools too wrapped up in their own self-righteousness that they can't even see the obvious degeneration of the galaxy happening all around them.

That said, the editing itself was solid, although a few bits seemed a little out of focus. Not talking about the inserted scenes either. It may have been the sources, or maybe it was on my side as I had ran it through Handbrake to put it in H.265 format for storage. Not 100% certain, but my other movies have not had that issue after the same treatment, so just tossing it out there in case it is something in the files themselves. I did not detract for it, as I was uncertain of the origin.

All in all a great version of this movie, and so far my favorite that I have watched.

Do you recommend this edit?
Yes
Format Watched?
MP4/AVI/etc. (HD)
E
eternalsage Top 100 Reviewer 26 reviews
Report this review Comments (0) | Was this review helpful? 0 0
December 21, 2019
Overall rating
9.3
Audio/Video Quality
8.0
Visual Editing
10.0
Audio Editing
10.0
Narrative
10.0
Enjoyment
9.0
A bit of background: I watch all the Star Wars movies once or twice yearly. This time and for the first time I began with The Force Awakens and went from the Rise of Skywalker to the Phantom Menace because I knew from the experience how bad it's to go to the new trilogy after The Return of the Jedi. Just finished watching the Episode I: Return of the Sith and oh boy how good it felt.

Now, I have watched this fanedit once or twice before many years ago and while it was good it never felt quite as good as it did this time. Other than the Podracing sequence it improves the original in every way. The pacing is very good and including some of the deleted scenes adds a nice flavor. The fanedit simply makes Phantom Menace into a very entertaining Star Wars movie.

For me, watching this after the sequel trilogy it's easy to say that Phantom Menace (at least through a good fanedit) is a better movie than any of the sequel trilogy movies. The Force Awakens is still good but it feels pointless to watch it because the trilogy itself is a wreck.

Cons:
- The added "deleted scenes" are SD/Low Quality. They do add greatly to the story though!
- The final battle vs Darth Maul is re-cut/changed. The battle itself was the best part of The Phantom Menace.

Conclusion:
THE BEST WAY to watch Episode 1 The Phantom Menace hands down! This edit cuts down nearly all the bad stuff from the original movie. It is and stays the Phantom Menace. You can't change that, but this edit comes as close to perfection for the movie from 1999. If this is your first time seeing TPM, or even if it's your 1000th time, i highly recommend this Edit. It's the best version of the movie. Most people tend to skip TPM on re-watching Star Wars. I say no more! Next time you watch Star Wars, do yourself a favor and watch this!

Do you recommend this edit?
Yes
Format Watched?
MP4/AVI/etc. (HD)
G
gfimontis Top 500 Reviewer 7 reviews
Report this review Comments (0) | Was this review helpful? 0 0
September 13, 2019
Overall rating
10.0
Audio/Video Quality
10.0
Visual Editing
10.0
Audio Editing
10.0
Narrative
10.0
Enjoyment
10.0
I truly believe this is the best available version of this movie. As many already know and stated, the acting and actual shots are what they are, making the movie itself almost unbearable for me. Thiis edit however makes it the most fun possible. I did not think it was possible for anyone to make this film entertaining for me one more after all those years. I tried not to think of it as an edit and to enjoy it like this is the cut ment to be and I have to say there is little I would have done differently. Big thanks to seciors and big recommendation to watch for every star wars or edit fan.

A. The pod race was quite exciting, not sure what edits were made here, but it seemed better than I remembered from the theatrical release.
B. Young Anakin cringe was kept to a minimum and Jar Jar never got the chance to upset me while still having a quirky personality.
C. Cut small problems that then get solved moments later as they aren't suspenseful during repeat viewings thereby making them pointless.
From a technical stand point this was an impressive fanedit, visual quality was astounding and there were no dodgy frames/cuts, no audio blips or glaring sudden musical cues. The deleted scenes that were incorporated back into the movie added to the experience and development of characters.

A. The film has been cut down to a mere 78 minutes excluding credits - there are no brakes here, the movie shares the necessary information then moves on. The end result is a nice action piece where you don't really care about the characters/events too much. It feels more like a recap than immersion into a living breathing world.
B. The final battle and Sith duel seemed cut down a fair bit - slightly disappointing as its one of the more interesting parts of the movie.
C. Cut nearly every character exchange not essential to the plot - this severely affects the character development of Qui-gon and Obi-wan, most of the other characters get developed effectively.

Ultimately, Phantom Menace is a hard movie to save, but the editor cut a little too much here, leaving bare bones dialogue which made the film feel like an empty shell. A great version if you're marathoning the films and needed to get this one out of the way fast.