Brief Synopsis:
The first of the revamped '9000 series', Cloak of Deception delivers a re-crafted perspective on Star Wars Episode I in keeping with the drive of the original trilogy of films. Unnecessary 'galaxy shrinking' cameos from classic characters have been cut down or removed. Anakin is depicted as a more mature and capable figure an audience can identify with. Jar Jar is recast as an everyman caught up in events outside his control who does his part in the fight for freedom, rather than a traitorous clown.
Intention:
By stripping away extraneous tangents and bolstering attention to character development, this edit seeks to improve the original film. The original trilogy is regarded as the template toward which the prequels strive. The prequels are made to submit to the continuity and drive of the originals to the degree possible.
Additional Notes:
I could not have done this without the prior fan editors who have tackled this film, including Seciors, L8wrtr, Q2, T528491, The Phantom Editor, JasonN, ADigitalMan, MagnoliaFan, TM2YC, Slumberland, NightStalkerPoet, Yads, Father Merrin, ModernKnife, and Sithlord. This edit is an update to The Phantom Menace (9000 Saga).
Other Sources:
Shadows of the Empire OST
Special Thanks:
Seciors
Hundsdorfex
L8wrtr
TV's Frink
Dominiccobb
Kerr
Emanswfan
OnlyOneKenobi
Q2
Sir Ridley
Release Information:
Special Features
Alternate audio (without added music during the podrace sequence)
Fan editor’s commentary track
Subtitles in English, Spanish, and French
Editing Details:
The following three goals are held in balance.
1) Bend the prequels to the story continuity of the original trilogy and the impressions it gives.
2) Improve the prequels in and of themselves, as films, through conventional 'FanFix' methodology. The pacing is improved, dialogue trimmed, and characters are developed better. This is the most readily apparent of these three goals that can be seen in The Phantom Edit, for example. The edits should be viable as films on their own.
3) They ought to be functional as replacements for the original versions. This means leaving the film's thoroughly "prequel" nature unaltered, respecting the broad strokes of Star Wars orthodoxy, and avoiding making changes that would betray to the audience that they're watching a fan edit. In other words, none of the other two listed goals should put undue stress on the goal of producing something that would have been suitable to have been released in 1999.
Cuts and Additions:
Cuts and Additions (An asterisk, *, signifies a change for V6):

Light film grain added throughout, to counter the overapplication of DVNR on the BluRay source.

Trimmed Neimoidian dialogue such as, "Are you brain dead?"

Cut instruction for the battle droids to "destroy what's left of" the Jedi.

Removed all instances of battle droids speaking or gesturing to communicate with one another. They seem to all be on the same 'network.'

Trimmed Neimoidian cowardice during the fighting.

Trimmed Viceroy's conversation with the Queen via viewscreen to downplay tedious political minutia and portray him as autonomous.

Removed the entire underwater trip to Otah Gungah, along with the tedious Sidious scene caught in the middle.

Removed scene descending the steps inside the palace discussing political exposition that we get again later.

Cut Qui-Gon's line that dismisses the battle droids as unimportant.

Tightened Qui-Gon's knock-knock joke with the battle droid, though kept some of the whimsy.

Removed Jar Jar's antics in the droid bay. Jar Jar throughout is portrayed as more of an everyman than a clown.

Dialogue trimmed throughout escape from the blockade.

Removed line, "No more commands from her highness today."

New subtitles with similar dialogue throughout, formatted to match the theatrical version.

Drastically reduced Jar Jar's antics in Watto's shop. Added noises of him causing a ruckus in the background in order to remove it happen onscreen.

Removed Watto's line that implies he was immune to the Jedi mind trick merely because of his species.

Removed several instances of the line, "Yipee" throughout the film by various children.

Removed cartoony sound effect of the frog thing flying through the air as Jar Jar spits it out.

Trimmed Jar Jar and Anakin during the introduction scene for Sebulba.

Trimmed Anakin's line as he invites them to his home.

Trimmed entrance to the Skywalker home, including some of the lines about Threepio. Anakin doesn't state that he is "building" him. A small change, but it allows for the idea that Anakin is merely repairing a previously abandoned Threepio.

*New line of dialogue for 3PO gently implies a backstory, culled from ‘The Clone Wars.’

Dinner scene has been trimmed, including mention of slave transmitters, Jar Jar antics with the fruit, and bad child acting.

*Jar Jar using his tongue to eat apples has been reinstated.

*Anakin defending himself about Watto’s old pod reinstated, including reference to Sebulba flashing him with his vents.

*Reinstated a trimmed version of Anakin working on the pod after Qui-Gon and Schmi’s conversation.

Removed balcony scene where Qui-Gon checks Anakin's blood. Anakin's racing/"piloting" skills are what prompt Qui-Gon to recruit him, rather than a blood test.

Cut conversation about Anakin never having won a race.

*A new line of dialogue from 3PO removes the implication that he has never traveled in space, for consistency with a prior V6 change.

Trimmed introduction to the racers to focus on Sebulba and Anakin.

Cut pack animal farting in Jar Jar's face (and in most of the audio channels, I'd point out).

Altered Sebulba and Anakin's conversation to be less juvenile.

*Removed previously added musical score to the podrace from the 'Shadows of the Empire' soundtrack and from 'A New Hope.'

Two-headed announcer trimmed throughout, along with various other things during the podrace. The sequence overall is similar to the theatrical, pre-DVD version.

*Reinstated a deleted scene snippet where Sebulba attempts to flash Anakin with his vents.

Trimmed bad child acting during scene where Anakin discovers he has been freed.

Added deleted probe droid scene to explain why Qui-Gon and Anakin are running to the ship. This scene was color corrected to remove pink tint and better match the surrounding footage.

Cut Qui-Gon's line, "Tell them to take off!" Anakin doesn't tell them anyway.

Removed scene on Naboo where the Viceroy sits on his walking throne because it references the excised underwater trip to Otah Gungah.

Lessened Jar Jar's presence in the scene between Anakin and Padme en route to Coruscant.

Removed Padme calling for Anakin on the landing platform.

Removed a reference during the Senate scene to the taxation of trade routes, to comply with the revised opening of the film.

Removed dialogue about Anakin being too old to be trained. Throughout these edits, the implication that all Jedi begin their training as children is removed.

*Reinstated dialogue about the Jedi Code forbidding more than one apprentice.

Removed line, "This may be the clue we need to unravel the mystery of the Sith." This is never expounded upon.

Removed all references to midichlorians.

Removed scene where Obi-Wan apologizes to Qui-Gon and Jar Jar emerges from the swamp.

*Added line, “When in trouble, Gungans go to sacred place,” as Jar Jar leads the company there. (idea from MaláStrana)

Trimmed scene between the Naboo and Boss Nass, including Jar Jar's hesitancy and cowering.

Reduced Jar Jar's antics throughout the battle, though he does appear during each Gungun battle sequence because he is the audience's only anchor.

Anakin gets into a cockpit and leaps into action in order to help the Queen, and intentionally flies up into the space battle.

*Reinstated a few snippets of Anakin within the Naboo starfighter.

Battle sequences restructured slightly to allow for Anakin to save the day rather than Padme. Originally, Anakin's actions were redundant after Padme captured the Viceroy.

Qui-Gon's last words are trimmed to remove heavy-handed request for Obi-Wan to train Anakin, allowing Obi-Wan to "take it upon [him]self to train [Anakin] as a Jedi."

Trimmed Obi-Wan's conversation with Yoda to imply that Obi-Wan wants to train Anakin himself, rather than to fulfill a promise to Qui-Gon.

Added credits for myself, workprint viewers, contributors, and acknowledgments of all other TPM "FanFix" fan edits to date.
Cover art by OnlyOneKenobi (DOWNLOAD HERE) 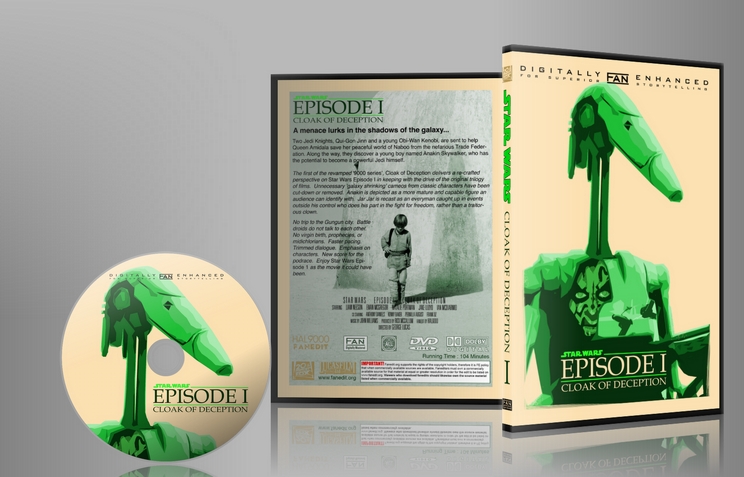 TPM can't and will never be a great movie, but you have turn a badly structured/written movie into a pretty fun watch.
Anakin is largely less annoying, the writing less corny, the story more concise, the subtles changes are quite perfect to build a more heroic, jedi-like character and a fun movie at the same time.

On the technical side, nothing bad to say, stunning work. Did not notice the cuts. Visuals and sounds are top quality.

My only complaint is regarding the pace and continuity of the movie at a specific moment. Although i'm the first to enjoy less Jar-Jar, cutting everything from his apparition to the arrival at Naboo Palace makes his presence in the rest of the aventure harder to understand. Why is he here all the time, following them if they just run into each other and that's all ? Pace wise, the jump from the forest to the place is a bit abrupt also....
Still can't really be mad, Jar-Jar is a detail compared to all the improvements you've made.

Now i'm happy to say, I find this TPM enjoyable to watch and that's not a small compliment.

Thanks for the hard work (and the french subtitles, greatly appreciated).

Do you recommend this edit?
Yes
Format Watched?
Digital
A
artorias117 Top 500 Reviewer 9 reviews
Report this review Comments (0) | Was this review helpful? 0 0
May 23, 2022
Overall rating
10.0
Audio/Video Quality
10.0
Visual Editing
10.0
Audio Editing
10.0
Narrative
10.0
Enjoyment
10.0
A belated review for an epic edit. This is the best we can hope for with the source material of the woeful theatrical cut. The political elements were cut down so the plot makes sense, Jar Jar is cut down, and the action is emphasized. Fantastic work!

Quite a lot of times, the rhythm and pacing of the editing is off with scenes feeling rushed or jumpy.
Some edits make little narrative sense (Jar Jar tagging along for no reason and Gungans appearing out of nowhere via jarring (pun intended) voice over, which must be the only use of it in SW outside of Force voices, being the worst offenders I think). Others, while trying to get at something interesting, just feel chaotic (the final battle).
Music editing also needed more work between the newly created transitions as cues often sound just faded at random points with no regards to phrasing.

That said, I counted ca. 20 smaller trims that work very well and would certainly find their place in a perfect edit.
I just don't think it's technically possible to fulfill the ambitions of this edit with materials available commercially to fans and not throw the whole rhythm of the edit off.

Format Watched?
Digital
A
alek2702 2 reviews
Report this review Comments (0) | Was this review helpful? 0 1
September 21, 2021
Overall rating
9.8
Audio/Video Quality
10.0
Visual Editing
10.0
Audio Editing
10.0
Narrative
9.0
Enjoyment
10.0
My first time seeing this, along with the other prequels, since the first viewing in theatres. Somehow it seems like the same movie (major plot points and characters are intact) while nevertheless feeling vastly improved in terms of tone, story and characterization. Hal9000 is a master and has utterly redeemed this trilogy, while keeping his handiwork nearly invisible. A difficult balance, but it looks effortless.

Do you recommend this edit?
Yes
Format Watched?
Digital
R
recordwrangler95 Top 10 Reviewer 136 reviews
Report this review Comments (0) | Was this review helpful? 0 0
September 12, 2021
Overall rating
8.0
Audio/Video Quality
10.0
Visual Editing
10.0
Audio Editing
10.0
Narrative
10.0
Enjoyment
6.0
This is absolutely an improvement over the original. I did not miss any of the removed content. That said, it's hard to convert a bad movie into a great movie. So this ends up being more like a "not bad" movie.