Star Wars - Episode I: Attack of the Federation

Brief Synopsis:
This fanedit combines the best aspects from other TPM fanedits along with the faneditor’s own concepts/edits to create a definitive version of “The Phantom Menace”.
Intention:
To combine the best aspects from other TPM fanedits along with my own concepts/edits to create a definitive version of “The Phantom Menace”.
Release Information:
Cuts and Additions:
01. Added a new title crawl (developed from an After Effects “Star Wars title crawl” sequence originally created by Taolar)
02. Major cuts/edits to Jar-Jar Binks, Anakin, Padme, the Gungans, and the Trade Federation
03. Removed all references to midichlorians, Anakin’s virgin birth, or the Chosen One prophecy
04. All scenes featuring Sidious’s now has his face from under his hod removed and his voice has been altered/lowered to conceal his identity
05. All Battle Droids’ voices have been removed (with the exception of one scene, where the voice is needed for plot purposes)
06. Removed dialogue redundancy throughout the film
07. No “Planet Core” sequence (both first and second parts)
08. Removed a lot of redundant dialogue by Ric Olie (aka “Captain Obvious”)
09. Took out the Viceroy’s “Now there are two of them!” line followed by his croony’s “We shouldn’t have made this bargin”
10. Removed Jar-Jar’s redundant scene with Padme cleaning R2
11. Removed Jar-Jar stepping in sh*t
12. Added in Watto humming the “Cantina theme” in his first scene in the film (audio taken from Magnoliafan’s “Balance to the Force” edit)
13. Added Watto shouting “You break it, you buy it, eh!” line to Jar-Jar (audio taken from Magnoliafan’s “Balance to the Force” edit)
14. Added the deleted scene of Anakin beating up Greedo back into the film – it now serves as Anakin’s character introduction to Qui-Gon
15. Removed the “Jar-Jar antics” at the Skywalker table
16. The Pod Race has been patterned after Slumberland’s cut (with a few additional tweaks/edits of my own)
- No two-headed alien “sports announcer” commentary
- No scenes of Jabba the Hutt
17. Added the deleted scene of Qui-Gon cutting down the probe droid back into the film
18. No mention of Queen Amadala being “elected” in the Senate scenes
19. Anakin does not talk after the “No Sir” line during the Jedi Council’s testing
20. Took out Qui-Gon’s description of Obi-Wan to the Jedi Council to “sell” them on making him a Jedi Knight
21. Numerous cuts to the Battle of Naboo sequence (Gungan army, Padme’s group, Anakin in space)
22. Padme’s “Get to your ships!” line has been replaced with the voice that was used in the TPM trailer
23. Anakin’s ship is no longer on autopilot (now pilots of his own choice)
24. Removed Qui-Gon asking Obi-Wan to train Anakin at his death
25. Removed Obi-Wan’s “I gave Qui-Gon my word” line to Yoda on training Anakin at end of film (Obi-Wan now decides to train the boy on his own)
26. Corrected the bad match-cut of Anakin turning his head at Qui-Gon’s funeral
27. Added “Faneditor’s credit” to the end credits 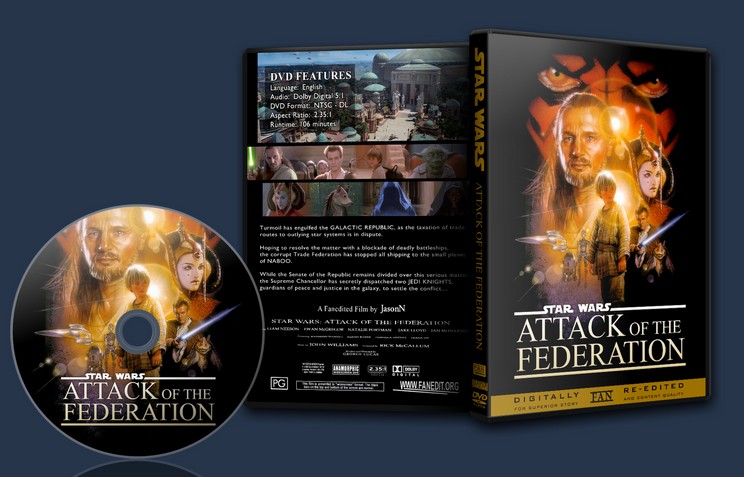 **OVERVIEW**
The Good:
-No Jar-Jar ‘Tarzan’ yell when jumping in the lake.
-Sidious’ lowered voice and obscured face really strengthen his menacing, phantom-like threat over the Republic.
-The Gungan-city scene was handled perfectly! It still feels weird, because you know what the original was like, but it flowed so perfectly. Excellent job!
-Boss Nass’ tics have been completely removed.
-The Planet-core sequence wasn’t missed at all, although you have to admit the Sando Aqua monster was pretty awesome! :)
-No Jar-Jar stepping in poo, and no Jar-Jar bout with Sebulba. Another great cut.
-Anakin’s fight with Greedo was a great addition.
-Jar-Jar’s pod-test antics completely removed!

The Bad:
-Instead of completely removing Fodesinbeed Annodue (the two-headed announcer), he should have been trimmed down, at best.
The introductory scene to the pod-race now feels weird, as if everyone is greeting the crowd for no reason whatsoever.
-It makes no sense for the Tusken Raiders to shoot two podracers without any difficulty, only to miss several Jawa’s repeatedly.
-Anakin’s introduction to Obi-Wan, and the following scene between Anakin and PadmÃ©, could have, and should have, been cut.
-Anakin’s scene with Amidala should have been cut. The smirk on Anakin’s face when he thanks Amidala is too much to bear.
-Again, this editor claims to have removed Anakin’s autopilot sequence, yet here as well, Anakin tells R2 to “override it”.
If there were no autopilot, what could he possibly override? This sequence seems to be overlooked by every single editor.

Annotations:
-Anakin’s ‘Angel crap’ dialogue could have been cut too, although it serves as a stepping stone to Anakin’s later feelings. So, okay, not too bad.
-Jar-Jar’s bumbling in Watto’s store couldn’t possibly have been left out, due to Qui-Gon’s “we’re leaving” bit, but again, no hard feelings there.
-The build-up to the original midichlorians could have been dropped altogether, although going from the pod-test scene to Darth Maul would have been too much of a good/evil contrast.
-Jabba the Hutt’s removal was spot on. This was another one of George Lucas’ “special cameo” appearances, and served no purpose whatsoever.

AUDIO:
No hard cuts, no mid-sentence cuts, no hard fadeouts, or anything of that kind.

PRESENTATION:
Static menu with fanedit trailers of Episodes I, II and III.
The fanedit trailers were a nuisance, to be honest.
JasonN is a great faneditor, but should get help when it comes to creating Fanedit titles and trailer texts. “Every history has a past”? By definition, history is everything that took place in the past. It doesn’t make any sense. Furthermore, those lines kept being used in all three Episode trailers. It made everything fall apart. In my opinion, the films could use better titles than “Attack of the Federation”, “Twilight of the Republic” and “The Black Knight Rises”.

IMPROVEMENT OVER THE ORIGINAL:
Even though it could do far better by removing all remarks listed under ‘The Bad’, it still deserves merit as the best Phantom Menace edit released so far. Jar-Jar’s antics have been severely reduced, Palpatine’s identity as Sidious has been hidden, as it should have been, and Boss Nass is no longer a spastic twit.

Adds up to a fanedit score of:
8,5 out of 10 stars
(Since I find this edit superior to The Phantom Edit, I gave it a solid 9 instead.)
K
kal-el Top 500 Reviewer 20 reviews
Report this review Comments (0) | Was this review helpful? 1 0
View all user reviews