Brief Synopsis:
I liked 'Star Trek Into Darkness' a lot but from the first viewing I could see the flaws and could see ways to fix them. So this is an attempt to create my ideal version, a version that brings out the best of what was always there. The "plot holes" remain (Removing them would be like trying to make a bowl, out of a sieve) but the emotional impact and character motivations are now what I think they should have been.


Intention:
There are a number of key problems that needed fixed with this movie: Kirk and Spock needed to not be enemies again, for the emotional impact to work. Uhura and Spock falling out was a distraction to the main themes and made Uhura look bad. Kirk being demoted and then instantly promoted was another distraction, when something simpler would work just as well. The late great Leonard Nimoy's cameo was sadly pointless and nonsensical. The film grade was just too damn blue/green compared to the nice vibrant dazzle of Star Trek '09. Lastly and most importantly, Kirk's sacrifice, Spock's reaction to it and the action-packed finale all rang a little hollow.

So, I've tried to fix or improve all these things and hopefully make a version of this film that isn't just thrilling cinema but something emotional too. The movie is re-graded using the IMAX version, new music is added and deleted scenes restored and finished. The events of the last act are heavily re-ordered so there is an emotional impulse for the final chase. The last scene has also been tweaked to bring things into continuity with 'Star Trek Beyond'.

A word on the title... the name of the enemy ship is "Vengeance" and a theme running through this film is revenge. The villains and our heroes all must face it's temptation and decide how to react. I hope I've brought that to the fore and I hope you enjoy 'Star Trek Vengeance'.

Special Thanks:
Special thanks to DigModiFicaTion for helping with a tricky piece of audio mixing and to addiesin for spotting an audio glitch and for finding me some smoke.

Thanks to all the people who offered vital feedback and general encouragement in the project thread including: addiesin, A Sled in Flames, asterixsmeagol, bionicbob, coinilius, dangermouse, hbenthow, ironman23, Canon Editor, DominicCobb, ImperialFighter, L8wrtr, Scar, SkywalkerFan01, Smithers, ssj, That One Guy, thecuddlyninja, ThrowgnCpr, Zarius and Zed.
Release Information:
Special Features
- 20.9gb 1080p Blu-Ray (Includes trailers, menus and chapter selection)
- 11.8gb 1080p MP4 (Includes trailers)
- 3.6gb 720p MP4 (Includes trailers)
- 3.9gb 480p DVD (Includes trailers, menus and chapter selection)
Editing Details:
- Cut based on IMAX "Compendium" Blu-Ray release, so most exterior and FX shots are at 16:9, rather than 2.35:1.
- Regraded movie to remove excessive blue and/or green tinting. It's still a highly saturated and colourful grade but now it's a bit more measured like the 2009 movie. Some scenes/shots are dramatically regraded, some are barely touched.
- Kirk is not now demoted and almost instantly promoted again (Twice). Pike tears strips off him for his recklessness and Kirk feels suitably ashamed.
- Things are re-arranged and refocused to bring the "guilt" for the fallout from Nibiru more onto Spock, for being a bad friend to Kirk and less onto Kirk for being a bad Captain.
- Kirk and Spock don't hate each other again. You have to believe they are friends, for the end to work. Kirk doesn't hold a grudge against Spock for what happened after Nibiru, he's just disappointed in Spock not understanding why he couldn't let him die.
- Uhura no longer spends the first half on the movie sulking because Spock was "selfish" enough to put the fate of an entire humanoid species before her feelings. This subplot ruined her character for me. Starfleet officers just don't act this way and she now visibly panics less.
- Khan exposition scenes are trimmed to a minimum. The convoluted plot still needs explaining though!
- Added several deleted scenes and finished them off with music, soundFX, matching colour grades and a few visFX tweaks. This includes some, or all of: 'Niburu Captain's Log', 'Room Attack (Alternate Version)', 'Carol's Accent' and 'Scotty Cargo Bay Door'. 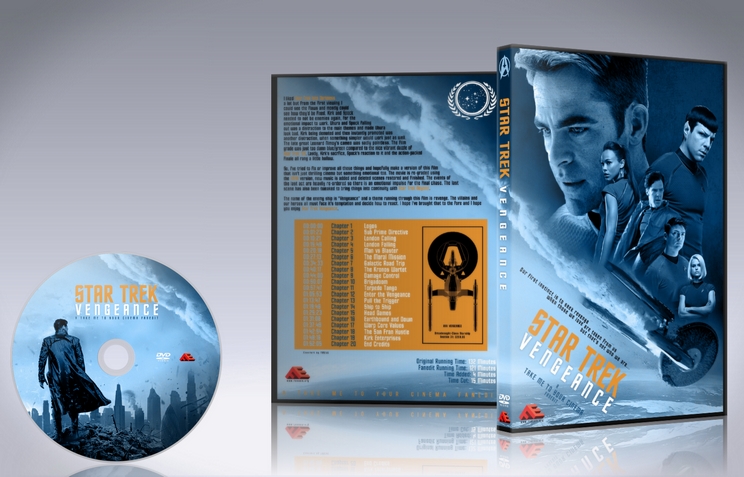 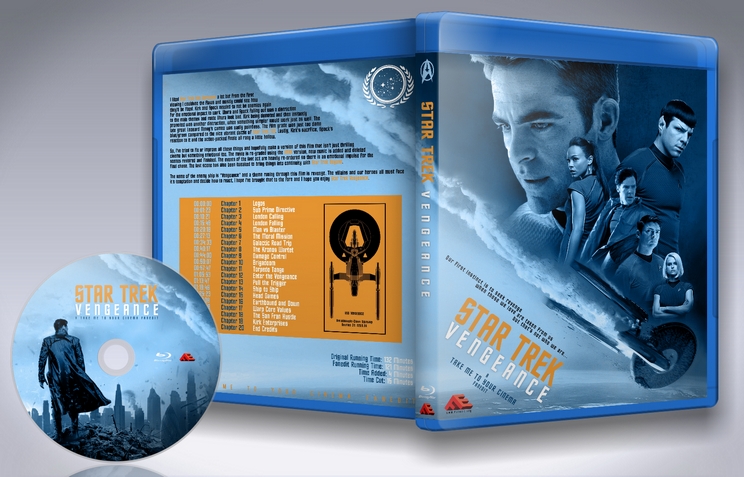 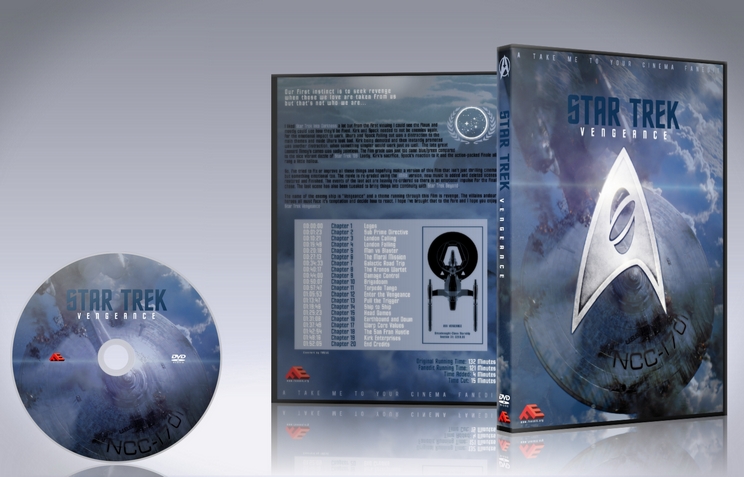 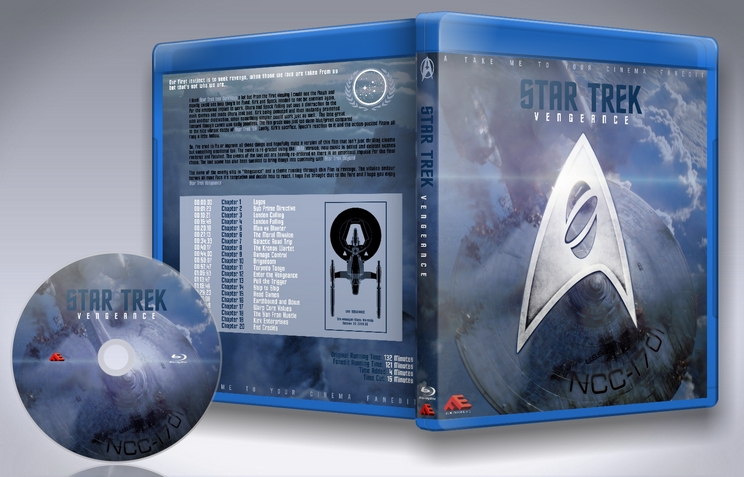 This is an outstanding polish to a movie which had many jarring moments originally. Having not watched it for quite some time, I'm now at pains to recall all of the issues I had coz this pretty much nails it.

There is no need for me to go into detail on the technicals, TM2YC is always spot on there.

The improvements to character, flow and pacing are spot on. You can feel the improvement in the relationships. My only issue (as noted by others) is the ending feeling a tad rushed but that's what you have to work with and it raises this from a 7 score (theatrical) to a 9 from my POV. I also miss Spock' cameo which I dont penalise this for omitting, but frankly, I'd be happy to watch Spock prepare Plomeek soup for Pike...no need for plot progression.

This has long been sitting in a blu ray case on my shelf, and after the recent review I felt the need to revisit; glad I did again (and not for the last time).
SUPERB!


W
wraith Top 50 Reviewer 74 reviews
Report this review Comments (0) | Was this review helpful? 1 0
September 17, 2022 (Updated: September 17, 2022)
Overall rating
9.8
Audio/Video Quality
10.0
Visual Editing
10.0
Audio Editing
10.0
Narrative
9.0
Enjoyment
10.0
Yet another TM2YC Star Trek edit that I've been meaning to watch for a long time (then again, given the source material, can you blame me?) Star Trek Into Darkness has a lot in it I don't like, from being a WoK rehash, injecting false-flag conspiracy politics into a supposedly Utopian-society, the stupid "let me hide all my friends in these super missiles" subplot, relying on fan-knowledge about Star Trek (Tribbles, the Eugenics Wars, etc.) without properly setting that up in the confines of the movie itself, etc. However, as stated in the summary, trying to remove all of this would leave us without a movie, so I won't hold that against TM2YC.

Instead, let me praise the miracle work done to all of these characters. I was worried that trying soften up Kirk while putting more of the blame on Spock would just make me hate the former more, but the edit finds a good balance, crafting a Kirk with a good head on his shoulders but still having a lot to learn. While I somewhat miss the scene where Spock explains why he mind-melded with Captain Pike (to explain why he's distancing himself from those closest to him), I understand cutting it to improve Uhura's character. Plus, I now believe that this Kirk & Spock are indeed friends by the time Spock chases Khan down for his blood to save Kirk's life (have I mentioned how stunning the technical work TM2YC accomplishes is?).

All that said, there's still one thing that bugs me that I felt could've been fixed: Pike saying that the device dropped in the Nibiru volcano was a "cold fusion reactor." I don't care how much times change or how lazy writers get, Star Trek is great when it tries to stick to scientific principles (even if they have to make them up for FTL travel), so saying that a "cold fusion reactor" can "make things cold" is just asinine to the Nth degree.

Still, if you are a fan of the Kelvin Timeline Trilogy & want to give it a watch, I recommend this edit whole-heartedly. Star Trek Vengeance isn't a masterpiece (again, hard to be, given the source material), but it's great, dumb, pulpy fun.

Do you recommend this edit?
Yes
Format Watched?
Digital
N
nic Top 500 Reviewer 25 reviews
Report this review Comments (0) | Was this review helpful? 1 0
March 06, 2022 (Updated: March 06, 2022)
Overall rating
9.4
Audio/Video Quality
10.0
Visual Editing
9.0
Audio Editing
7.0
Narrative
9.0
Enjoyment
10.0
Definitely better than the original. Better I'd say even than the first one. It looks better, the pacing is better, there is less filler, the story is tighter. It looks great too. The color here definitely is better than the original's; it pretty much reminded me of the original Trek movies a lot. The influence from the Trek movies definitely helps.

Minor issues affect the edit: namely the very ending. Everything straight from the beginning was top-notch, but the very ending seems a bit flat. The original's choice to keep the fight between Khan and Spock suspenseful by revealing the necessity for Khan's survival a little later was good. This edit bypasses that suspense and because of that, the final fight isn't as cathartic. Leaving that part in would've surely tied the edit together thematically in connection with the title: Vengeance. Actually, I do have an issue with the title because thematically, vengeance isn't a very big aspect of the story. I get that the reference to the USS Vengeance is a bigger reason for the title being that way, but Star Trek has always been neat in titling its movies. The Wrath of Khan is very poetic and spot-on. Generations, Nemesis, etc. Vengeance being the title here isn't very strong. Finally, the edit tried a little too hard to end the film in a more isolated manner, but it ends up being too rushed. It needed the lengthier ending of the original. Kirk's speech in particular at the end is very awkwardly cut, straight into the Final Frontier speech.

Overall, the visuals are great, and the visual editing is too. The audio just kinda suffers a bit with the awkward cutting at the very end. Nitpicky and anal? Perhaps, but that awkwardness right at the very end kind of breaks the spell that the film holds on you, especially after such a masterful experience beforehand. Another auditory badness is the mixing. I wish something could be done for the mixing because it still has that theater-intended mix that sounds terrible on TV. Finally, the narrative is just a little iffy, as in the examples I've stated above. Overall, as the edit is now, I'd give it a solid 6.5/10, while the original was a 4. It'd be a 7 if the ending was fixed.

Do you recommend this edit?
Yes
Format Watched?
Digital
J
johnfransen Top 500 Reviewer 5 reviews
Report this review Comments (0) | Was this review helpful? 2 0
March 05, 2021
Overall rating
10.0
Audio/Video Quality
10.0
Visual Editing
10.0
Audio Editing
10.0
Narrative
10.0
Enjoyment
10.0
This edit is great, simple as that. I very much enjoy the new Star Treks, Into Darkness the least of the 3, but I still enjoyed it. That being said, I do agree with the criticisms of it. This edit did a great job of getting rid of all the little things I didn't love about it.

I wanted to enjoy this movie in theatres, I wanted to enjoy it when I bought the DVD to share with my dad (avid star trek fan) and I did, despite a lot of moments that make me raise my eyebrow. Why bother having Kirk demoted and repromoted? They sting you with it and immediately take it back. Spock yelling Khan in theatres got a chuckle out of me and I can't imagine that was the intended result.

That and a few other things, but this edit makes the movie what it should have been. Enjoyable from start to finish.

The edits are clean. Minor thing when a line of Spock's is changed at one point, his lips do not match up - so minor it doesn't lose points and I am sure I only noticed because I wrote the subtitles :).