Star Trek Phase 2: In Thy Image 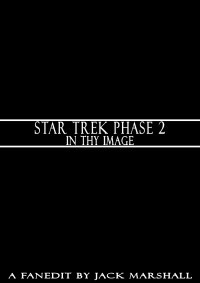 Join the Forum Discussion
Tweet
Brief Synopsis:
Based upon Star Trek V: The Final Frontier THIS is what a new Star Trek TOS series would have looked like. Truly special...
Intention:
In the fall of 1977, Star Trek was poised for a comeback. After being cancelled in 1969, a revival of the series called Star Trek Phase II was planned to begin airing in the fall of 1978 on the then proposed 4th network, The Paramount Network. Sets and props were constructed, screen tests done and several scripts developed including In Thy Image, the proposed pilot. The ship was being updated and all but one original cast member, Leonard Nimoy (Spock), had signed on when Paramount pulled the plug. Seeing the success of the previous years blockbuster Star Wars, the new Trek show was cancelled in favor of creating Star Trek: The Motion Picture.

Now, more than 20 years later, Star Trek has released a total of 10 films, and has spawned 4 spin-off series over 700 hours of storytelling. But had it not been for Star Wars, we would not have the Trek we know today. Had Star Wars not
forced Paramount to go with a movie, there would have been no Next Generation, Deep Space Nine, Voyager or Enterprise. Most likely the show would have run for5 years, then been relegated to syndication, thus ending Trek for good.

With over 700 hours of stories, there's bound to be a few adventures that don't hit home with the fans. For many this describes Star Trek V: The Final Frontier. But for me, I found Trek V to be the movie that most reminded me of the original series with which I had grown up. So, to showcase what I believe to be a very underrated film, I offer this remixed version called: Star Trek Phase II In Thy Image the re-imagined pilot episode of the Lost Trek series.

This remixed version of Trek V runs 63 minutes (the same runtime as the original pilot,The Cage). The story is broken up into the traditional Trek format of a teaser and five acts. Also, the storyline has been altered, removing those things fans found most objectionable like a certain Vulcans new half brother or a turbolift shaft that travels through 78 decks (when we KNOW the ship only has21 decks total!!)

The music score has been enhanced with music from the original series, as well as many classic sound effects such as the bridge ambient noise, the planet background sounds and other effects having been added. In addition, several special effects have been replaced.

So, forget what you know about Star Trek. Imagine turning the dial (manually) to September of 1978 to the premiere of the new Trek show. There's a new ship, the 1701-A, the familiar crew, albeit older and wiser, and when its over you realize that this IS Star Trek. An alien convinces a crazy Vulcan that hes God? Crazy Vulcan in turn hijacks the Enterprise and heads for the center of the galaxy with Kirk and company in tow? Kirk stands toe to toe with said alien
and kicks his ass? Sounds like an original series episode to me!

Enjoy and remember, this is provided as a collectors oddity only. If you buy it or sell it you're BREAKING THE LAW. Star Trek is owned by Paramount Pictures and no infringement is intended.
Release Information
NTSC DVD-5

I had been wanting to D/L this edit for some time, but never seem to get around to it until today.

When I saw the original version of this movie in the theaters, I thought it was so horrible that I had put a self-imposed ban on Star Trek. It took me until ST 6 was released to even start watching ST TNG on tv.

I was glad to have watched this edit. It is an immense improvement of a nearly unsalvageable film. Gone are about 99% of the “UGH moments, poor acting/comedy bits/against established character scenes that have always annoyed me in the original version.

Technically, a wonderful edit. I like his use of “cliffhanger go to commercial” fades and the way he executed them. I can’t comment really on the video quality, as I had to D/L the .avi version from RS verses the dvd version (I don’t have MU). The audio is perfect and I thoroughly enjoyed the “classic” sound effects, especially the “planet background” effects.

As far as the edit, I completely agree with RockSavage, the opening “cliffhanger” was much too long. I did not really get the feel of watching an episode until around Act II. Although I agree that this scene he used as the opening is utterly necessary for the edit, it is just too long to be a teaser. Not sure what could be used in place.

One of the big pluses of the way this edit has been done, is that the Sybok is Spock’s half-brother is eliminated. The edit has a much more Vulcan guy gone crazy that Spock once knew feel to it and makes for a much more tense viewing. Gone is the silly Uhuru fan dance (maybe she could have pulled that off in the 60s, but not in the late 80s!) and, whew, gone is the leotard 80s hair chick cat woman attack! Thank you JackMarhsall!

As RockSavage wrote, I , too, would have liked to see the silly “Scotty hits his head on a bulk head” scene gone. The entire scene can be completely excised after Scotty blows the jail cell.

As a whole, this is my preferred version of ST V. It’s is a huge improvement over the original!

I must say, when I first saw that someone had edited Star Trek V, all I could think of were A) the rock climbing scenes, B) some little kid I knew giggling at a three-breasted woman in a bar, C) Spock’s crazy (and “is he really necessary?”) brother named Sybok and his search for God, and D) the shuttlecraft crash. But why did any of these things happen? I couldn’t say, as it was far from the most memorable movie to me.

Having said that, this project really intrigued me, and I basically watched “In Thy Image” with a clean slate. I must say, the concept really worked! It certainly does feel like a classic episode and is quite enjoyable. (The only thing that didn’t feel TOS about it was some of the language, but that couldn’t be helped.) There is a fun feel to it, and having some of the old sound effects in there, combined with some of the fun lines that were retained give a nice feel to it.

Well done, sir, and we look forward to future offerings!