Brief Synopsis:
A Tarantino inspired Star Wars mashup and remix.
Intention:
To take The Empire Strikes Back and remix it, using songs from and inspired by the films of Quentin Tarantino. 100% of the score has been replaced, as well as overdubbing Yoda with Pai Mei, from Kill Bill Volume 2.

There are many visual nods to Tarantino as well, but in no way is this intended to be a new Tarantino film! It's intended as a fun homage to one of my favourite filmmakers, and a remix of one of the best films ever made. Steering away from the Tarantino vibe, I have also included a hero moment for most of the main characters, and thrown in a few songs that Tarantino would never use in a million years... Hope you enjoy it!
Additional Notes:
Version 2 - released August 2014. - Significantly reduced John Williams' music spill present in V1, and as a result, was able to better integrate new music with existing dialogue. - Minor visual tweaks/fixes.
Other Sources:
Footage:
Star Wars, Episodes 2-6
Star Wars: The Clone Wars (2D animated series, 2002) 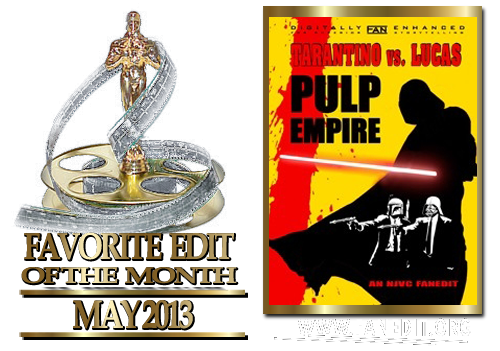 Special Thanks:
1) Neglify, Gatos, g1orkatsos, TMBTM and Blueyoda for previewing and providing great feedback.
2) To everyone in the forums who gave suggestions over the past year. Many of those ideas are in the final cut, so thank you for chipping in!
Release Information:
Special Features
Fanedit Trailers, About this Edit Featurette
Cuts and Additions:
1) Replaced 100% of the soundtrack.
2) Added a number of visual references to Tarantino movies
3) Given each main character a hero moment/montage
4) Rebuilt the sound effects from scratch in many scenes to allow for the music replacement and to manage spill as much as possible.
5) Created a non-linear structure, split into complete chapters (Inspired by Kill Bill Vol. 1)
6) Replaced Yoda's dialogue with Pai Mei (Kill Bill Volume 2)
7) Replaced the Millenium Falcon's engine with Stunt Man Mike's from Death Proof 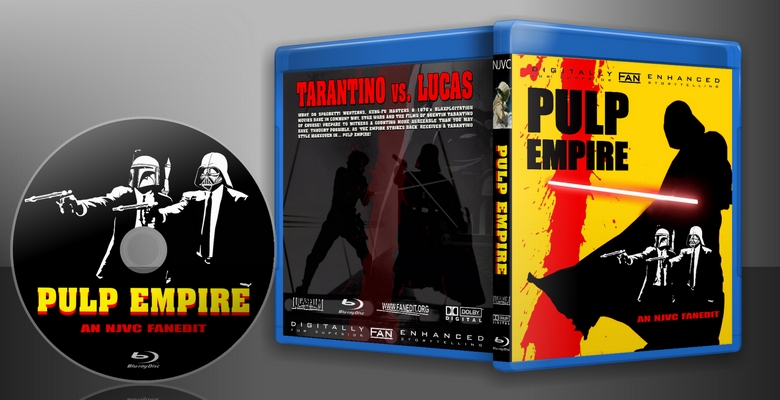 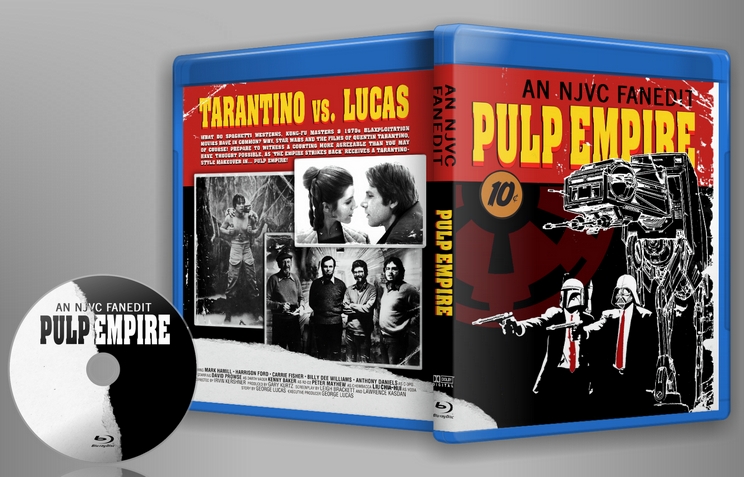 Note: DVD artwork included.
Trailer
Chapter 1: The Search for Yoda
Chapter 2: The Battle of Hoth
Chapter 3: Rebels on the Run
Chapter 4: "A Jedi, Like My Father..."
Chapter 5: Among the Clouds"
Chapter 6: Battle Royale"

Do you recommend this edit?
Yes
Format Watched?
Digital
V
vincenzo-peruggia Top 500 Reviewer 23 reviews
Report this review Comments (0) | Was this review helpful? 0 0
May 05, 2022
Overall rating
9.8
Audio/Video Quality
9.0
Visual Editing
9.0
Audio Editing
10.0
Narrative
10.0
Enjoyment
10.0
I suppose where I'm coming from will surprise no one, but I am a fan of most things Tarantino, and Empire is one of my top 10 (maybe even top 5) favorite movies. Naturally, I was very excited for this edit when I heard about it and wanted to see this one for myself! I'm happy to say that, despite my high expectations, I was quite impressed!

This edit pretty much is the epitome of "give 'em what they want." I wanted a Tarantino-esque version of Empire Strikes Back, and I got it. I could throw in my own complaints, but they're of the super nit-picky variety. Like maybe that stylistic choice was overused, or I wish njvc used a different song for that moment, or the narration on that part was weird, etc. None of my criticisms hold any merit to the edit as a whole.

Like everyone else has already said, this is a fun watch! Of course, most Tarantino films are fun to begin with, so I consider it as a compliment that this edit manages to capture the feel of a Tarantino film. I find that the emotion of an edit is often one of the more underlooked aspects of fan editing, so I always appreciate it when a fanedit gets the feel just right!

If you saw this ifdb page and it immediately sparked your interest, then by all means, go seek it out! You won't be sorry.

Do you recommend this edit?
Yes
Format Watched?
Blu-Ray
E
eyepainter Top 100 Reviewer 39 reviews
Report this review Comments (0) | Was this review helpful? 0 0
May 02, 2021
Overall rating
9.7
Audio/Video Quality
10.0
Visual Editing
9.0
Audio Editing
10.0
Narrative
9.0
Enjoyment
10.0
This film was just a whole bunch of fun - it wasn't afraid to take risks and I had an absolute blast watching it. The editing is on a whole nother level, with lots of fun split screens and funky text combined with the incredible music and audio editing creates a new experience to watch TESB. That being said I think the narrative, although wildly entertaining, is not as good as it could've been and as mentioned in numerous other reviews, the excessive slo mo does get tiring after a while.

Do you recommend this edit?
Yes
Format Watched?
Digital
B
bzstuff Top 1000 Reviewer 3 reviews
Report this review Comments (0) | Was this review helpful? 0 0
November 24, 2019
Overall rating
9.9
Audio/Video Quality
9.0
Visual Editing
10.0
Audio Editing
10.0
Narrative
10.0
Enjoyment
10.0
A phenomenal edit that is just a very fun watch. Can't put it into words, really, but if you're a fan of music, Star Wars, and/or Tarantino, I highly recommend checking this out!

Unfortunate that it's in 720p, but other than that everything is great.
M
macmilln Top 100 Reviewer 39 reviews
Report this review Comments (0) | Was this review helpful? 0 0
October 19, 2019
Overall rating
9.3
Audio/Video Quality
9.0
Visual Editing
9.0
Audio Editing
10.0
Narrative
10.0
Enjoyment
9.0
This is the reason a category like "FanMix" exists in fan edits, and lordy do I wish there were more of them. What a truly fun and original idea. I watched this with a few friends and some beers, and I have to say I think that's the ideal situation. Much laughter and amusement was had.

A few notes, as the star ratings apply a bit differently to this kind of edit:
A/V quality: as some others have noted, it's hard to do slow mo when they didn't film it in slow mo. You don't have as many frames as you need, and it can look cheap. That said, even though there was a LOT of slow mo used, it didn't distract too much.

Visual Editing: wow, so many bold choices here. The split screens, some new wipes, fades... lots of it amazing. A couple of those slow mo fades went TOO slow and were distractingly cheesy for me, but overall it was great.

Audio Editing: I was not holding this film accountable for replacing every scrap of Williams' score, as Tarantino always mixes in many different styles and crossfades seemed fine to me. As such, no "remaining bits" stuck out to me, unlike what some other viewers have mentioned. I actually have to give njvc a perfect 10 since it's so hard to isolate dialogue from score and re-edit without losing parts.

Narrative: ok, look, the original ESB was not made in a vacuum. You had to have watched the first Star Wars, and ESB basically had no ending, either. I would not expect this edit to "fix" that. It's made for those familiar with the Trilogy, and with Tarantino's films. So don't expect the same kind of narrative flow of other movies. And sorry Tarantino superfans, his movies aren't nearly so "tight" as you think. Tarantino always writes stylish SCENES, and his overall narrative is secondary. He's definitely a director that focuses on style over substance, and in fact most of both his style and his substance is taken from other films and other writers and directors. This film is a perfect mash-up then, because it does to Tarantino exactly what he's done to other filmmakers. Well, except this film actually gives credit to the inspiration. So Tarantino could do that if he re-titled some of his films "Reservoir Dogs in the City on Fire", "The Glorious Dirty Dozen Bastards", or "Game of Killing Bill".. But I digress. For what it's trying to do, essentially give you all the feelings without heavy focus on plot, this film accomplishes its throughline.

Enjoyment: this will depend a lot on what kind of style you enjoy, but the 70's and Tarantino influences are obvious in the choice of music and montages. Neil Young doesn't do much for me, and the extensive use of his song at the end of the film consequently fell flat for me. On the other hand, some people commented they didn't like the way The Ecstasy of Gold was used, but all my friends and I were super into that. Generally, if you like Star Wars and Tarantino films (particularly Kill Bill), then you should enjoy this highly.

The only other thing I'd add is that I think the film could've leaned into the "fun factor" a lot more heavily. Most people have pointed out the character montages (especially Vader's) as a highlight, and I would've liked to have seen a fitting one for Leia, as well as ones for Lando, Tarkin, Chewie, and the ever-crapped-on droids R2 and 3PO. I'd agree that about 50-75% of the way into the film, the narrative gets a little straight and boring. In the original ESB, they use the lulls of the Falcon in the cave and the gang at Cloud City in order to then shock you when the cave moves and Vader shows up. However, this is a different kind of viewing experience, and that 'building tension' doesn't work the same. With about 30 minutes cut out of the film, this is more of a lean action movie, so that late mid section needs to move accordingly. I actually didn't miss much of the cut material (do like the Taun Taun stuffing) except that (as some others have noted) the ending fell a bit flat for me. The previous use of split screen would've been great to have Luke and Vader psychically communicating at the end, and I feel there's a cut of that somewhere that would've added to the sense of poignancy and attempting to avoid fate that njvc was going for.

All in all, a super fun film, and one I'll show to anyone who wants to know what a "fan edit" can be. This defines the field. Thanks njvc!