Brief Synopsis:
'Ghostbusters (2016)' recut to remove 75% of the improv jokes, so the film stays on script and on character. Less is more... less jokes... more funny.
Intention:
Both the 'Theatrical Cut' and 'Extended Edition' of 'Ghostbusters (2016)' are massively flawed IMO. However, in fanedit tradition, I think with the flaws removed the film is a really strong one. The cast is great, the story is good, some of the humour is spot on, the costume/set/prop design is imaginative, the visFX (A mixture of CGI and practicalFX) are nice and it brings a fresh more action-packed, colourful and fun take on the Ghostbusters universe.

The detractors would have it that the film was a total train-wreck but I think it's actually a good movie... wrecked in the editing room. They tried to squeeze in as much of their cast improving jokes as they could and forgot to concentrate on the story and people. It felt choppy and incoherent as scenes are constantly interrupted by irrelevant improved jokes. Worst of all, no character felt real, as they all say crazy out-of-character and out-of-reality stuff. Holtzmann can say and do crazy stuff because that is who she is, everyone else should act like they exist in a real world. Then we will believe in them, get invested in them and laugh along with their problems. 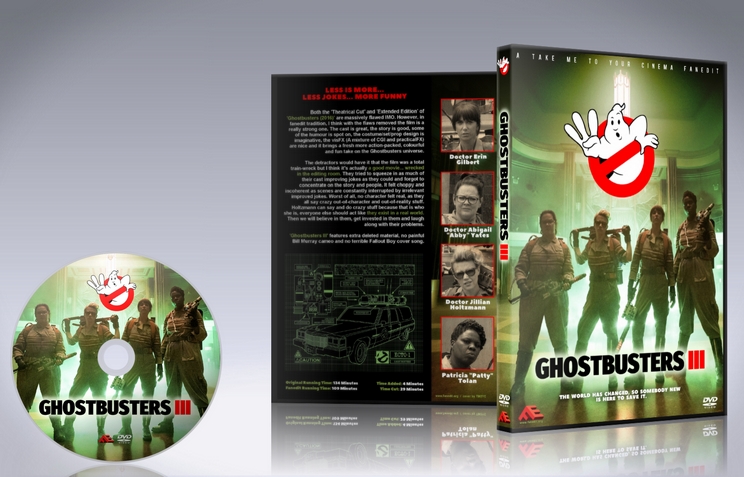 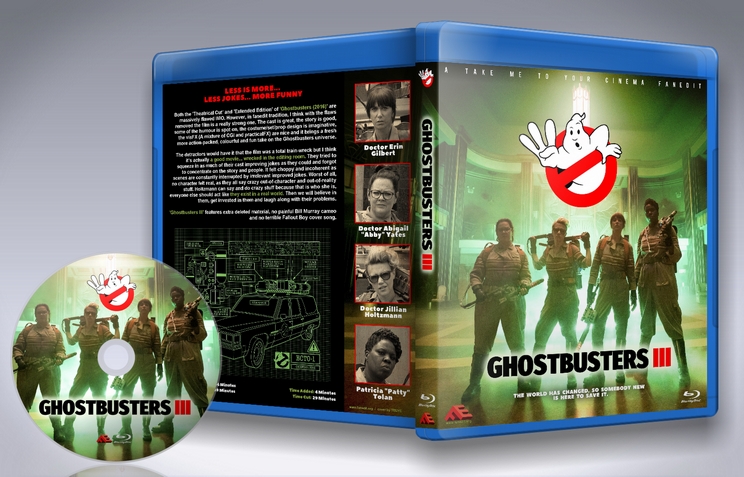 The Problem In One Edit (A Comparison)

So, i wanted to see what this FanCut did to make it better, faster, more serious and still fun.
And it is. A lot of cringe is gone, and the rest in it is ok and transports the story or at least, is not that over the top anymore.
The jokes that are in now are good with much more less stupid in them.

I like the all Female cast and could do without Chris at all, but since he is in the original, i dont blame this edit for keeping him.
Give it a try !

Format Watched?
Digital
V
vincenzo-peruggia Top 500 Reviewer 26 reviews
Report this review Comments (0) | Was this review helpful? 0 0
October 31, 2022
Overall rating
7.1
Audio/Video Quality
10.0
Visual Editing
10.0
Audio Editing
10.0
Narrative
8.0
Enjoyment
5.0
I have to preface my review by saying I've never watched the original. I picked up the Blu-ray on clearance and never even took off the shrink wrap.

I watched this edit with my wife, and the quality was good enough that she didn't know it was an edit until I told her when we finished. The video and audio cuts are excellent.

The narrative was a bit hard to follow. People don't act like real human beings, and I'm not really clear on when Leslie Jones joined the crew, she was just suddenly part of it. But maybe that's the fault of the original material.

I had heard a lot of bad things about over-the-top gags and poorly improved lines, but for the most part the comedy that was still left in this edit did work for us. And I do appreciate the relatively short run time.

Overall, though, I have to say I didn't enjoy this movie. Even edited, it still feels like a pointless remake of a classic comedy, that copied the format and major story beats but lost everything that made the original fun.

Do you recommend this edit?
Yes
Format Watched?
Digital
A
asterixsmeagol Top 500 Reviewer 7 reviews
Report this review Comments (0) | Was this review helpful? 1 0
September 10, 2022
Overall rating
9.1
Audio/Video Quality
10.0
Visual Editing
10.0
Audio Editing
10.0
Narrative
8.0
Enjoyment
9.0
Ghostbusters (2016) wasn't a horrible movie when I first saw it in theatre many years ago. I started to dislike it little by little as years went by, but nowadays I think the movie is just extremely fine. It's nothing special or unique, it's the worst Ghostbusters movie and it did leave a bad impact on the franchise on many people's hearts.
But when I found out that TM2YC made a edit of the movie that removes many bad improv jokes and scenes from the extended version of the movie, I decided to finally watch it. Was it good?

In shorter terms, it was. It did fix the pacing of the movie, it did remove the cringey scenes and dialogue and left the best parts that did work and enhanced them. This edit doesn't fix everything, though. The story is still kind of simple, but I can forgive that because Ghostbusters movies don't focus a lot on the narrative. I recommend this edit to those who want a lot better version of the movie and also to those who want to give Ghostbusters (2016) a second chance.

Well done, TM2YC! You edited this movie to be best it could be!

Do you recommend this edit?
Yes
Format Watched?
Digital
A
arpeggio-0563210 Top 500 Reviewer 14 reviews
Report this review Comments (0) | Was this review helpful? 1 0
April 19, 2022
Overall rating
8.8
Audio/Video Quality
10.0
Visual Editing
10.0
Audio Editing
10.0
Narrative
9.0
Enjoyment
8.0
Loved Ghostbusters. Really enjoyed Ghostbusters 2, but to be honest, it hasn't aged as well as the first one. When I heard another sequel was in the works I was very excited, then I watched it...

It's not a secret that the 3rd installment was almost universally panned by critics and viewers alike. When I saw TM2YC had taken up the gauntlet to "fix" this movie I was intrigued. I see lots of different of reasonings for edits. Some are reinterpretations of already loved movies. Some are attempts to fix films that are perceived as having so much potential, and through editing, finding the diamond hidden in the coal. This film is perceived as just coal, no diamond inside, not even "fool's gold", just a bad movie. Could a good movie be in there somewhere?

After watching this I can't say there was a diamond hidden, but there is a really good movie. Removing the majority of the impromptu jokes and one-liners which are scattered EVERYWHERE in the movie has left a good movie. One-liners are fun in MODERATION. Making an entire movie around them is just so exhausting for the viewer. Kind of like special effects. Good special effects can make a good movie great, or even make a great movie unforgettable, but a story just built around endless special effects is just lazy cinema (see Godzilla (1998)).

When people say Ghostbusters 3 is bad I always bring up this edit and how it really improved the experience. If I were to watch Ghostbusters 3 again, this is the only version I would watch. If you like the franchise, watch this, at least once, so you can see what this movie should have been.

Do you recommend this edit?
Yes
Format Watched?
Digital
U
uziel25 Top 500 Reviewer 23 reviews
Report this review Comments (0) | Was this review helpful? 1 0
December 22, 2021
Overall rating
9.3
Audio/Video Quality
10.0
Visual Editing
10.0
Audio Editing
10.0
Narrative
9.0
Enjoyment
9.0
As with a lot of other fans of this franchise, the theatrical release was like a kick in the stomach. It was cringe in a lot of places and a perfect example of why directors need to keep improv tighter and character types in line. This edit should be named the Fan's Cut. While not 100% perfect (hard to be with the source material), this edit turns a not watchable film into a decent and for me at least enjoyable.

Do you recommend this edit?
Yes
Format Watched?
Digital
B
bromichaelhenry Top 1000 Reviewer 2 reviews
Report this review Comments (0) | Was this review helpful? 0 0
View all user reviews