Brief Synopsis:
After a plane crash killed his billionaire parents, Danny Rand was raised by monks to become their guardian defender, known as the Iron Fist. However, Danny wanted nothing more than to go back home, unlike his new best friend Davos. With his new found powers, Danny makes his way back home to find that his friends don't recognize him and that his father's company is now run by a mysterious crime syndicate.

Danny seeks the aid of Colleen Wing, an experienced martial arts instructor yearning for a purpose to help him defeat the Hand and save his family legacy. Little does he know, this entire operation has been manipulated by an old friend who should not be walking among the living.
Intention:
This edit is part of a larger project to condense the pre-Disney+ era of Marvel TV shows into standalone films to enhance the reviewing experience. Unlike the previous edits in this series, Iron Fist and the Legend of the Hand actually seeks to improve on the original.
Other Sources:
Marvels' Black Panther (2018)
Outkast - Stankonia (Song "So Fresh, So Clean" featured in Episode 1)
Apashe - I'm a Dragon feat. Sway (Song Officially Licensed for Iron Fist Season 1 Trailer)
Special Thanks:
Cesarhulk123

Color is important throughout the Defenders series. Each hero has their own representative color seen in grading, lights, etc. Daredevil is red, Jessica Jones is blue, Luke Cage is yellow, and for Iron Fist they decided to do blue again. Multiple scenes have been recolored to either a natural grade or a believable green grade.

Just about every scene featured has had dialogue trimmed. This season has multiple conversations drag on much longer than necessary. Plenty of the necessary scenes feature details from plot-lines that have been cut, so those pieces of dialogue have also been cut.

The first scene is now Danny on the plane with his parents. This combines flash backs from Episodes 1 and 2 to avoid the strange VFX done to represent faded memory. Watch this scene here.

The MCU Phase 3 Intro now plays and to Outkast's "So Fresh, So Clean" to seamlessly transition into the shows actual first scene.

15 Years Later added after the Marvel logo to tell the viewer that time has passed.

Danny no longer needs to use a woman's elevator key. It simply cuts from him entering the elevator to leaving.

The Avengers Tower added to the New York skyline.

Eagle flying through New York re-cut to the beat of the music. Added Flashbacks to Danny leaving K'un-lun to build connection with Eagle.

Danny no longer meets with either a doctor or with Harold while at the Psychiatric hospital. He's now only there to be attacked by order of the Meachums. All references to either event have been removed. We first see Harold alive as Danny escapes the hospital.

Harold no longer orders Danny to be reinstated as CEO of Rand. Hogarth, instead, convinces Ward of Danny's legal identity through an item belonging to Joy.

Harold no longer tells Danny the name of the Hand. Danny deduces it himself with the knowledge that Harold came back to life.

Colleen's character arc has had the focus of her students shifted to needing a real mission while paying the bills. No scenes feature her dialogue from her main students, but we do get to see her at the underground fight scene.

Danny retelling his time in K'un-lun is coupled with flashback shots.

Colleen training at her dojo has been paired with Danny exercising in his room to include both scenes, include more hip-hop, further Colleen's development, while letting the plot continue to flow. Watch this scene here

Madame Gao no longer shows up to Rand Enterprises to ship heroin. She shows up to tell Danny to quit his war and then leaves.

The fight scenes from China have been coupled with Yang-Hai Qing invaded the Red Hook pier to give the sense that this is the same warehouse and not actually in China.

Nobody attempts to rescue Gao while at the Chikara dojo.

Danny and Colleen's first kiss is moved to them waking up at Bakuto's compound. Any earlier would have looked rushed with the included plotlines.

Danny figures out that he's at a Hand facility through reading Colleen's emotions rather than her telling him herself.

Danny and Colleen reunite the same night that they escape from the Hand.

In the same night, Bakuto lures Danny by taking the Meachums hostage.

When fighting Bakuto, the Iron Fist doesn't disappear on Danny, he's focused and balanced enough to not lose the fist anymore.

Claire doesn't set the hotdog stand on fire to distract the lobby guards.

Hogarth does not come to Harold's cremation.

Joy and Davos conspiring to kill Danny has been moved to after the Mid-Credits.

Danny and Colleen discovering that K'un-lun is missing is moved to after the Post-Credits.
Cover art by Forbidden Marvels (DOWNLOAD HERE) 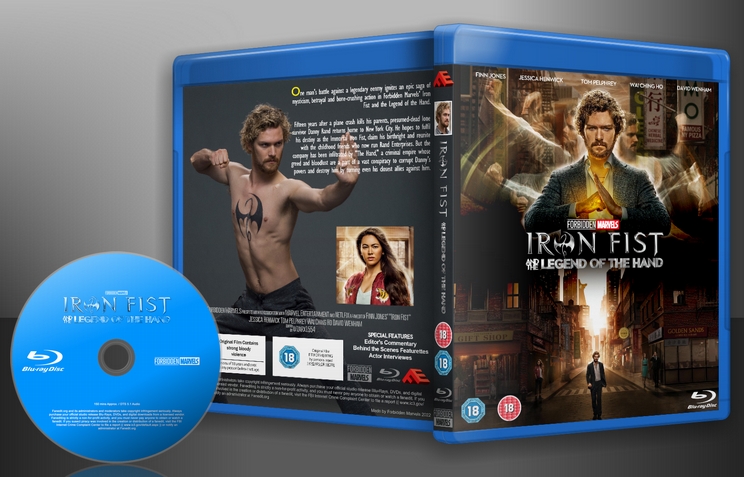