Additionally; fixed/cut inconsistencies:
- Arishem says that a new Celestial is born every BILLION years, and that Ajak has helped MANY emerge over MILLIONS of years. Fix: dub "million" over "billion".
- (Deleted scene) Whitman tells Sprite that a skull in the museum is a Smilodon, which is a Sabretooth Tiger. The skull is clearly too big for that. He compounds this by saying it's in the "extinct Macrodontini sub-family". Macrodontini are a (not-extinct) type of long-horned beetle. Fix: Sprite talks over Dane before he says the wrong thing. That seems like her style.
- Cut Druig telling his friends that the Amazon was the last place they lived together. The establishing shot en route to Druig has the title card "Amazon", but the last place they lived together was Tenochtitlan, which is present-day Mexico City. That's several countries away! That was a needless and embarrasing error for a culturally sensitive movie.
- Thena remembers that she died with everyone else on Centuri-Six, but at the end Phastos states that Eternals survive Emergences by linking to the newborn Celestial. Perhaps Thena remembers it wrong (though her memory seems the only one that's actually accurate) or Phastos' hypothesis is wrong (though he's quite brilliant at deducing things). More likely, it's another unforced error: an unnecessary contradiction. Solution: cut Phastos' theory.
- In the final battle, while Kro attacks Ikaris, Thena asks Kro why he helps Ikaris. That makes no sense to me. I've cut the line.
- Not an actual inconsistency, but unnecessary and improbable, is Ajak finding a shotgun on the ice exactly in a location that she's pushed to. Why is it there? According to Ikaris he tracked the Deviants there after they killed a group of workers. So why are those workers' bodies and weapons here? Away from their equipment and accommodation, on an ice-sheet adjacent to a melting glacier. Yes, lots of things are implausible in superhero movies, but let's limit them to the ones that advance the story. This one doesn't: Ajak could have used her superpowers to fight the Deviants. Solution: none. I found no way to improve the scene, so the shotgun stays.
- Tiamut is huge. Its head and each hand are the size of islands. Yet the only hint that this "baby" Celestial had been developing inside the Earth for untold years is one series of worldwide earthquakes the week before it hatches? WTF? Anyone who's felt/seen a baby move inside it's mom's belly knows that you don't get just one kick a week before delivery: it moves around A LOT during its growth and development. I found no fix, sadly the edit retains this flaw.
- Arishem explains that "Tiamut needs vast amounts of energy from intelligent life." Then he specifies this as humans. But what about whales, dolphins, mice (à la Douglas Adams)? Nobody in this movie even mentions animals. Except for one "Noah's Ark" joke from Sprite. Why position this movie as if humans are the uniquely chosen species, when the rest of the MCU is full of non-human intelligent life? Again, no fix found, we're stuck with this perspective.
Cover art by lapis molari (DOWNLOAD HERE) 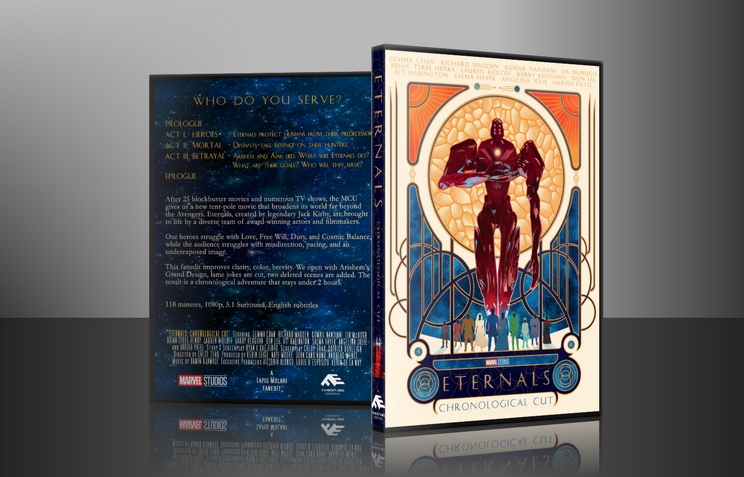 2 reviews
Overall rating
8.4
Audio/Video Quality
9.5(2)
Visual Editing
10.0(2)
Audio Editing
9.5(2)
Narrative
7.5(2)
Enjoyment
8.0(2)
July 23, 2022
Overall rating
9.1
Audio/Video Quality
10.0
Visual Editing
10.0
Audio Editing
10.0
Narrative
8.0
Enjoyment
9.0
This edit greatly improves upon the theatrical cut. The trims and additions are done beautifully and masterfully, and I wholeheartedly recommend watching it.
Furthermore, presenting the film in a chronological order works wonderfully, in my opinion. Seeing the team's dynamic evolve through the years is clearer in this edit. However, there was one main issue that made this edit problematic in my eyes: our knowledge of Arishem's plan.
Knowing the plan in advance cheapens the moment(s) where the other Eternals learn about it. Additionally, A first-time watcher would probably find the info-dump challenging. The way the theatrical cut handled it wasn't great either, don't get me wrong, but this edit's solution isn't the optimal. Additionally, using the same visuals twice (in Ajak's vision and in Sersi's), not to mention Thena's visions, was quite tedious for me.
All in all - I highly recommend watching this edit.

Do you recommend this edit?
Yes
Format Watched?
Digital
B
boazz750 Top 50 Reviewer 64 reviews
Report this review Comments (0) | Was this review helpful? 0 0
July 18, 2022
Overall rating
7.7
Audio/Video Quality
9.0
Visual Editing
10.0
Audio Editing
9.0
Narrative
7.0
Enjoyment
7.0
While an interesting idea to approach the Eternals story in chronological order, I feel that unfortunately it doesn't work here. A number of things, from the first scene thrusting the audience right into the mission with Ajak, to the scenes cut or trimmed for time, leaves the introduction of these characters feeling very flat. What also greatly works against the film, in my opinion, is knowing early on that Icarus murdered Ajak. The lack of any reveals in this cut makes for an ultimately unsatisfying finale.

Where the original theatrical cut feels more artistic than most MCU affair, the trimmed runtime here makes the Chronological cut feel more like a traditional Marvel movie, which I guess is a good thing because I wouldn't want to see this go on much longer. The inclusion of a few key deleted scenes does help with character development, but the other changes leave me feeling about the same as I did when I saw the theatrical cut, which is that Eternals is a fairly forgettable movie with some great visuals.

Now, I hate to compare to another editor in my review, but since there was a Battle of the Eternals Edits, I will simply recommend checking out my review for WakeupKeo's The Apostasy Edit.

Do you recommend this edit?
No
Format Watched?
Digital
J
josephdquinn Top 500 Reviewer 20 reviews
Report this review Comments (0) | Was this review helpful? 0 0