Cyborg V: Attack of the Fembots

Brief Synopsis:
A threat so big it will take two of television’s greatest heroes to defeat it!

Oscar Goldman Kidnapped! The OSI Weather Control Satellite stolen! And a mad scientist determined to bring the world to its knees!

Col. Steve Austin and Jaime Sommers must team up to stop the diabolical Dr. Franklin and his robotic army of Fembots from bringing about an environmental apocalypse to the planet.
Intention:
Simply recut my all time favorite 3 part bionic crossover episodes into a fun, escapist 2 hour movie.
Release Information:
DVD
Cuts and Additions:
–created new opening credits
–removed all the commercial breaks
–removed all opening title card scenes
–restructured/trimmed the episode cliffhangers
–removed repetitive exposition
–many tiny cuts/trims to increase the pace of the adventure and bring the edit in at the two hour mark
Cover art by Rogue-Thex (DOWNLOAD HERE) 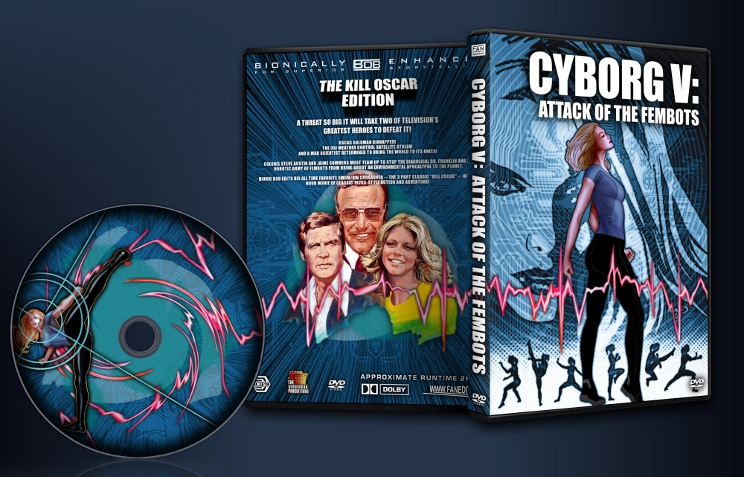 Given that the source material is from the 1970s and is 4:3 interlaced, I don't see any real criticism to be leveled here. It of course doesn't look great, but that's pretty much to be expected. While some interlacing is noticeable (again, part of the original source), what surprised me was that a lot of the video was close to DVD quality. Of course, some scenes are far from DVD quality and suffer due to the inherent poor quality of the original footage (probably due to the low budget cameras used for TV in the 1970s).

At any rate, I have no problem with the faithfully reproduced 1970s TV quality. :-)

Bob did a very good job combining these three separate episodes into one seamless experience.

I only have two comments regarding the visual editing component; near the beginning of the edit, when the evil Doctor is in his lab and showing off his Fembots for the first time to his "investor," it felt like there might have been some slight discontinuity with regards to the locations of where the actors were standing. This might have been due to editing around a commercial break, or other editing choices, or maybe the discontinuity exists in the original footage. Regardless, it did slightly stand out to me.

The other comment about the visual component I have also might have been inherent to the source material, but nonetheless was distracting. Later on in the edit there are perhaps 5 or 6 shots of the evil Doctor at his control board, shot from behind and above. These shots (though not every single one) sometimes were blurred and had a slight fisheye effect; it made it feel like we were watching the action through a (bad quality) surveillance camera. Again, the number of shots this occurs in is few, and it also could be how the original source was presented.

I am only taking one point off as I do suspect that these issues are inherent to the original source, though I would have preferred that the editor could have found a way to remove them. However, since the editor's intention was stated to "simply recut [these episodes] into a fun, escapist 2 hour movie" I feel inclined to not take any additional points off for this.

And in all other aspects, the visual editing was excellent; removing all the commercial breaks as well as the transitions between episodes were flawlessly done, and that is a much more important job to get right for this type of edit!

The audio editing was also well done, though I did have a few minor issues. First, during the first half of the edit, I noticed some faint "clicks" that usually mean there was an edit point that wasn't smoothed over enough. However, it certainly is possible these are artifacts from the original source material. Nonetheless, I'd have preferred they weren't there. (Note: I usually use headphones when listening to edits, and this ends up making small audio details stand out that might not be detectable through normal speakers…)

One other minor issue I had was a feeling that a few times the audio cuts felt a tad abrupt, but this was very infrequent, and something most people would probably not notice.

The final minor issue I had was that sometimes I felt the background soundtrack interfered with the dialog, making the dialog hard to hear. I'm almost positive this is due to the source material, but nonetheless, it was distracting when it happened (which was very infrequent, thankfully).

Beyond these minor issues, Bob again displayed excellent editing skills matching the visual editing so that all other edits were seamless.

The story was clear and without any plot holes. The story itself had some questionable plotting (mainly due to the 3 part TV format which required filling up a certain amount of time), which does force me to take off one point. However, I appreciate the edits Bob made as they all improved the story in the way he intended them to.

I really enjoyed the story Bob chose for this edit. And watching them as one single episode as opposed to three separate ones provided a nice alternative way of viewing the story.

However, I do have a few issues that prevented me from rating this higher. Specifically, I felt that the running time started to weigh down on my enjoyment. This was obviously a TV show where they had to make each episode roughly equivalent in terms of enjoyment, thus including standard elements of exposition, action sequences, and plot developments. Since this was a 3 part story, I think by merely combining them without any other major goal, the overall experience suffered slightly. Bob did remove some repetitive exposition, as well as 35 minutes in total which was well done; but I think he could have gone further to make the story a tighter and more focused experience.

I want to emphasize that I very much enjoyed watching this edit; but in the end, I'd say it would be on par with my enjoyment of the original episodes. That is not necessarily a bad thing; if I liked the original, and liked this version the same, this to me means that Bob accomplished his goal, which did not mention improving the story in any way, just merely combining them together in a seamless manner. Since Bob did achieve this goal, he provided an alternate, equally enjoyable experience, at least from my point of view.

This was a fun throwback to my youth, and Bob definitely displays excellent skills at combining multipart TV shows together in a seamless manner, which is not an easy task. Additionally, the story he chose for the edit is indeed one of the better ones from the series. And there are some truly classic 70s type moments. For example, I love how at the end, after getting out of their wet suits, Jaime is wearing nice clothes, while Steve strips to basically his boxers, and remains that way for quite some time! Plus there are plenty of roll-your-eyes moments concerning comments about attitudes about women and their abilities. I could mention many more moments like this; and that is part of what makes this edit fun to watch!

My one suggestion to Bob would be, if he is up to it, to take his obvious skill and knowledge of these TV shows, and maybe be a bit more bold and daring with his goals; perhaps take a look at the narrative and try to fix some of the issues inherent in the source material, while of course retaining all that is good about why we would want to watch (or re-watch) these campy 70's TV shows almost 40 years later. Or even take a stab at making a few changes in the narrative as well to tell a slightly different story. For example, in this edit, he could have easily let the evil Doctor "go down with the ship" instead of using the original ending that felt a bit anti-climactic given all the action that happened previously. That's just one example; there are many other things that could have been changed as well, given the large amount of material provided in this 3 part long story.

But this is not meant to be a criticism, only a suggestion for a future project, and only if it's something Bob is interested in doing!

As it stands, this edit achieves everything Bob set out to do, and for that I highly commend him on another success!

This is a very fine edit, and will be very enjoyable to all who like this TV Show. I think it is also one of the stronger, more fun and campy story lines, and thus should have appeal to those who never have seen the original shows yet are looking for something that is a classic 70s TV show with action, adventure, campiness, and a bit of sci-fi.

This was a pretty fun edit. I didn’t grow up with the TV shows so the nostalgia factor isn’t there for me, but I still enjoyed it. 8/10, recommended

This was a LOT of fun. I had enjoyed Bionicbob’s previous effort, Cyborg – The Retro Con cut; but as an origin movie it had felt a bit long winded and seriously lacked action. This one is quite the opposite and thrilled me from beginning to end; it’s everything I remember about the Six Million Dollar Man from when I was a kid, and everything a escapist action adventure movie should be.

This one’s got it all: evil masterminds, cyborgs, weapons of mass destruction, bionic feats, kidnapping, submarines, beautiful women (rawr Lindsay Wagner) and much, much more!

As for the DVD itself, the menu’s simple but very nice and animated; the image quality is top notch and I didn’t sense at any time that this was a three-parter edited into a movie. Excellent editing job.

All in all, a great treat for us older gentlemen who fondly remember that show; or a great way for a younger audience to discover one of the greatest sci-fi shows of the 70′s!

9/10
B
blueyoda Top 100 Reviewer 57 reviews
Report this review Comments (0) | Was this review helpful? 0 0
June 28, 2012
Overall rating
9.2
Audio/Video Quality
9.0
Visual Editing
10.0
Audio Editing
10.0
Narrative
9.0
Enjoyment
9.0
Very enjoyable trip down Memory Lane. As blueyoda noted, the editing is seamless; Attack of the Fembots truly comes across as a feature movie of its time, not a serial.

Do you recommend this edit?
Yes
S
ssj Top 50 Reviewer 86 reviews
Report this review Comments (0) | Was this review helpful? 0 0