Brothers Grimm: The Fairytale Workprint, The

Brief Synopsis:
With a well publicised troubled production Terry Gilliam's 'The Brothers Grimm' is in Terry's own words "Not the film they wanted and it's not quite the film I wanted". The "They" in this case would be The Brothers Weinstein, the film's producers, whose on-set arguments with Terry got so bad that production was even shut down while things calmed down.

Still what remains is by most other Director's standards, a great film. A decade later it's stood the test of time and it reflects well on Gilliam that he cast actors like Matt Damon and the late Heath Ledger against-type in the lead roles, at a time when they perhaps weren't taken as seriously as today. Plus giving future 'Game Of Thrones' star Lena Headey the female lead, seems like genius in retrospect. I felt it was time to take another look at this wonderfully loopy and fanciful film through the prism of fanediting...

Using all the available 'Deleted Material' and hints provided in Terry's Director's Commentary, I've tried to bring this film a little closer to the longer and
crazier cut that Terry originally might have wished to have seen the light of day. Hopefully this cut is also better, less mainstream and more like Terry's other work.

The available 'Deleted Material' was excellent but only available in a very poor and largely unfinished state. So as much as was possible, I've tried to finish VisFX, complete the Soundmix and Colour-Grade the footage to match the body of the movie. However, the scenes are still in a less than perfect state, which is why I call this... 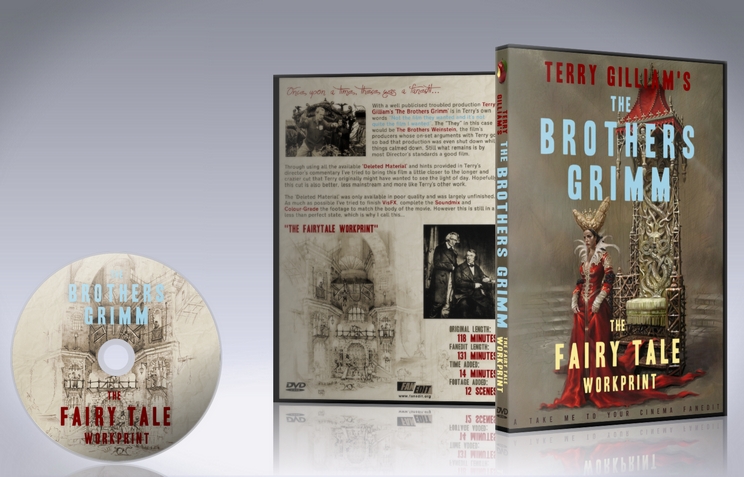 Do you recommend this edit?
Yes
Format Watched?
Digital
F
flounder Top 10 Reviewer 160 reviews
Report this review Comments (0) | Was this review helpful? 0 0
April 13, 2017
Overall rating
8.4
Audio/Video Quality
8.0
Visual Editing
10.0
Audio Editing
10.0
Narrative
8.0
Enjoyment
8.0
I was 15-years-old when "The Brothers Grimm" was originally released, and a hardcore Gilliam fan. At the time, I wasn't disappointed. While the plot was a bit of mess and the central characters mostly cliches, Gilliam's dark imagery and visual comedy were what really made it pop. Remember that this movie preceded Pan's Labyrinth and other, emotionally stronger entries in the fantasy renaissance that didn't really kick off until the late '00s.

When I had some friends over and popped in my DVD again to watch this for the first time in years, it sadly did not hold up as well as I had hoped. With so many more fairytale-inspired films on my shelf today, the general confusion and bad characterizations felt a bit less forgivable. I still throughly enjoyed much of the visual style and comedy — particularly in the many wonderful scenes in which children are captured by dark, magical creatures. My read was that this was a case of a great director stymied by an overbearing studio and a weak script.

So last night I stumbled upon TM2YC's edit, and was intrigued by an effort to create a cut of this film more faithful to Gilliam's original vision. Not only are the deleted scenes that TM2YC has reincorporated expertly polished, but many of them actually strengthen the narrative and characterizations to the point where I would be happy to recommend this movie to Gilliam fans without a tremendous amount of equivocation. Some specific thoughts on the additions and changes:

1. Yes, the Red Riding Hood scene belongs at the beginning. it's just a much more powerful opener. Without the introduction of the Grimm brothers as adults, the audience has no reason to care about the "fake magic bean" story. It just feels like a magic-less bummer, which is just exactly the wrong way to start a movie the promises to be a fairytale. With Red Riding Hood, we get a visually interesting take on an old standard — no justification needed, and from that point on the audience knows exactly what sort of movie they are watching.

By putting the "magic beans" sequence later as a flashback, it does a much better job of characterizing the differences between Will and Jacob. We know from the scene in the barn that Jacob is not entirely happy with the trickery he and his brother just executed on the townsfolk, and the beans flashback explains why. This establishes a dramatic conflict between the two leads that we can then follow until it reaches a climax by movie's end.

2. The additional moments with Cavaldi are nearly all essential. In the original cut, Cavaldi was perhaps the most baffling character. The entire film built him up to be a sinister torturer with no regard for human life, only for him to turn and choose not to shoot the Grimm brothers during the climax. Why would someone who had no problem torturing innocents suddenly becomes squeamish when asked to shoot enemies of the state? From that point on, the audience was simply asked to regard this scoundrel as one of the film's gang of protagonists. What? While Peter Stormare's performance was wonderfully hammy, the character just didn't make any sense.

Now, it's much more clear — in "The Chef Gets Chopped" scene, we discover that Captain Delatombe suspects Cavaldi of being a con artist (just like the Grimm's!) who is in fact, too squeamish to maim and murder. His elaborate machines are meant to be over the top — they're just bits of theatrics! Just this short scene makes Cavaldi's turn after Delatombe's death much more sensible. With Delatombe alive, he had to appear to be the Grimm's enemy in order to prevent his own execution. Once Delatombe is gone, Cavaldi no longer needs to maintain the ruse.

3. In the original cut, the audience is given virtually no reason to root for Will until the very end, at which point his affection for Jacob and Angelica seems to come from nowhere. This is why the "Will to the Rescue" is also essential. This ends the second act, and it is the first time we see Will risking his own safety in order to save another's life. From then on, despite his gruffness, we know he really is a man with a good heart.

4. The original cut sorely misses the moment when Angelica thanks Jacob for aiding their escape from Delatombe. Without it, the audience has no evidence that she has any affection for the brothers, or Jacob in particular. Will's rescue attempt and her acknowledgement of Jacob's aid means that the following scene of romance and jealousy in Angelica's house feels much more grounded.

5. The establishment of Delatombe's distrust of Cavaldi means that Delatombe's intervention into the village prior to the climax feels, again, far less arbitrary.

The "Fairytale Workprint" doesn't make Grimm a perfect movie, but it does elevate it to something that feels much more worthy of Gilliam's filmography. If you found no redeeming value to the original cut, you probably won't be converted here. If, however, you thought Grimm was a visually enthralling fairytale with a confused narrative and baffling character moments, TM2YC goes a long way toward redeeming it.

I would love to hear Gilliam's thoughts on this cut, if someone were ever able to convince him to watch it.

Do you recommend this edit?
Yes
Format Watched?
Digital
N
nvader90 1 reviews
Report this review Comments (0) | Was this review helpful? 0 0
February 03, 2015
Overall rating
8.1
Audio/Video Quality
10.0
Visual Editing
10.0
Audio Editing
10.0
Narrative
8.0
Enjoyment
7.0
I've only seen "The Brothers Grimm" once before, a year or so after it was released. I barely remember it and I'm pretty sure I fell asleep off-and-on throughout. This is definitely a fanedit for those who are fans of the film, as it's still a snoozefest for me.

BUT, in terms of fanediting skill, this was excellent. Aside from the quality of the deleted scenes, you'd never be able to tell anything was different than the theatrical film. TM2YC's editing is invisible and the amount of work put into this is commendable.

For me though, this remains one of Gilliam's biggest misfires.

Format Watched?
DVD
N
neglify #1 Reviewer 462 reviews
Report this review Comments (0) | Was this review helpful? 0 0
January 08, 2015
Overall rating
8.1
Audio/Video Quality
9.0
Visual Editing
10.0
Audio Editing
9.0
Narrative
9.0
Enjoyment
7.0
This was a valiant attempt to salvage what is considered by many (including myself) to be a major disappointment from Terry Gilliam's filmography. I like a lot of things about the movie, first and foremost the cast, but it never feels like it gels into something that truly works. Unfortunately, even after all of the work that TM2YC put into fixing the film, I still feel the same way. It's just not as much fun as it should be. I was rather generous with my "enjoyment" rating, however, as this edit does not at all deserve to end up with a low overall rating.

The amount of work put into this was staggering! Considering the generally poor quality of the available deleted scenes (most of them unfinished), they look and sound great cradled into the existing film. The editor built sound beds, fixed color timing, finished VFX, and cut these new scenes seamlessly into what was already there, and it's nearly perfect. Short of actual magical intervention, these scenes will never be fully on par with what the studio finished, but fear not, they're far from experience-ruining. They were also placed in logical spots, so as not to disrupt the flow of the narrative. This was both a blessing and a curse....on the one hand, they're mostly a lot of fun and dial the quirkiness up a notch (always a benefit when discussing Gilliam), but they also made this (IMO) already-dragging film into an even longer one.

I would say that, if you liked the original film, there's no reason you shouldn't enjoy this version even more. But if, like me, you don't remember The Brothers Grimm fondly, this edit isn't going to change that. Either way, it's an impressive edit made even more mind-boggling when you actually see what went into bringing it to us. And how awesome is that cover?!