A View To A Kill: Moore's Final Chase

Brief Synopsis:
A View to a Kill - Moore's Final Chase cuts the bloat, the cheap laughs, and much screaming. No Beach Boys, gratuitous sex, or shower scene. The springboard atop the Eiffel Tower is erased. The fire truck chase is trimmed.
Intention:
Psychotic Max Zorin has tremendous potential as a Bond villain. Aided by menacing May Day, he, like Lex Luthor in Superman (1978), wants to trigger a Californian earthquake. Where Gene Hackman's Luthor is intelligent in a reasonable kind of way, Christopher Walken gives Zorin a level of insanity that convinces us he could actually come up with the scheme - and see it through to its genocidal conclusion.
Much of the shine of this movie was buried under cheap jokes, long chases, and screaming. Oh, the screaming! Trimming / cutting those polishes the movie into the worthy final adventure that was hidden inside.
Other Sources:
A View to a Kill soundtrack CD to replace the Beach Boys cover.
The Man with the Golden Gun blu-ray for Roger Moore saying the word "bed" with usable speed and inflection.
Special Thanks:
LastSurvivor for the Eiffel Tower shot and constructive criticism, bionicbob, Zarius, and everyone who contributed suggestions in the forum thread.
Release Information:
Digital
Special Features
1080p
5.1 AC3 640kbps
English subtitles
Cuts and Additions:
Pre-title sequence:
- Replaced Beach Boys song with James Bond theme copied from the Eiffel tower jump & chase.
- Cut a green-screen close-up of Bond skiing (bad FX).
- Cut all interior shots of submarine.
- Moved two cutaways shots of Soviet skiers to fill the slots of the above-mentioned removed shots, and cut one exterior submarine shot.
- Cut a few seconds of the ski-chase for pacing, moved a few shots around to make that work.

UK:
- Cut lame joke in Moneypenny's office about Bond's return from Siberia.
- Mute Q's "micro comparator" (unnecessary and I find it makes Q sound like he's *trying* to be smart, which he needn't show off nor would he).
- Cut joke about Bond winning at the races (not funny and made Moneypenny look daft).

France:
- Cut absurd face and mute sexist comment by Aubergine (this isn't 'Allo, Allo!).
- Mute lame joke of "fly in his soup" (thanks @LastSurvivor for inspiration).
- Trim Bond chasing Mayday up the Eiffel tower (making him less of a bad shot and not get tangled up in the fishing wire).
- Erase the diving-board on the Eiffel tower (actually Lone Survivor erased the diving-board. He did this perfectly for his own excellent edit [], and I am thankful to copy his work for this shot).
- Dub the cabbie's exaggerated English with actual French, he now shouts "Ma voiture!" (not all French sound like "Rene from ze Cafe", using the blu-ray's French DTS track).
- Cut two shots of the cabbie to reduce his exaggerated flailings (unfunny physical comedy).
- Mute Bond's sexist comment that Stacey "bears closer inspection" and cut the subsequent bad joke to Tibbett that Bond would be doing that for duty. This doesn't fit anymore, because in this edit Bond does *not* sleep with Stacey. He acts like a responsible father figure to her.
- Cut the terrible fight-scene between Bond/Tibbett and two guards in Zorin's storage. Moved the Bond/Tibbett exterior shot immediately after for better narrative flow. Re-ordered the subsequent Mayday/Zorin martial arts practice to accommodate that I removed its cutaway shots.
- Trimmed Mayday in bed with Bond: cut the first 18 frames to get rid of the infamous frame jump. Cut the last frames that had Bond rolling his eyes to the tune of God Save The Queen. It's a weak joke and I prefer to make up my own mind whether Bond is doing this merely for "Queen and Country" or that he not. (I tried to smooth the frame jump of Mayday getting into bed with Bond by adding frames made in photoshop. I added 10 frames with 4 layers for different movements: Bond's arm, Mayday's body, sheets, background. I was not satisfied with the result, so decided not to use them and instead I cut 19 frames to remove the frame jump).
- Change Bond's cringe-inducing joke to Zorin that he "got off eventually" into that he "got to bed eventually" (the word "bed" taken from The Man With The Golden Gun).
- Erased Mayday from two shots when Tibbet's at the gate. It bugged me that Tibbet wouldn't bother to look in and around the car to see where she suddenly disappeared to.
- Cut Bond's jocular comment that his horse is a little spirited (lame).
- Cut all shots of gimmicks at the Bond/Zorin horse-race, making the race simply brutal for Bond because Zorin's "exercise boys" beat him up while riding.
- Fix a brief audio drop-out in the front-left channel during the horse race.

USA:
- Cut most of the jacuzzi scene (bad jokes and slow pacing). Bond still gets the girl, just without the goofy stuff (and without Tchaikovsky).
- Cut product placement for The Sharper Image when Bond enters Stacey's home through the window (retain "click" for unlocking the window).
- Trim fight inside Stacey's house (to minimize bad chareography).
- Mute goon's "Hey, wait for me" (sounded too much A-Team villain). Used the German DTS track for this.
- Cut Stacey's "what is [a quiche]?" (Plea to scriptwriters: fewer dumb lines for actresses please!).
- Cut Stacey's "ten times more than they're worth" (made her principally sound decision into a bad business decision, without that information these interests no longer need to conflict).
- Cut Stacey's "I'd sell everything and live in a tent before I give up" (the silence speaks for itself).
- Trim exposition between Bond/Stacey/CIA's Chuck Lee (for pacing, and because superfluous).
- Trims to Bond & Stacey entering at City Hall (for pacing).
- Trims to burning elevator (excising much of the screaming Tanya Roberts was made to do in this movie, the German audio track proved helpful because not all screams were copied).
- Outside burning City Hall: cut cop's "goddammit", mute fireman's warning about the latch on the truck (made cop sound not in control, and fireman's reference no longer applies as the resulting sequence is cut).
- Many trims to fire-truck chase, including removal of the loose crane and cop-car pile-up. (This isn't the Blues Brothers). Now the chase ends with Bond's trademark announcement that his name *is* "Bond, James Bond".
- Many small trims in Zorin's cave (for pacing).
- Cut the pit inside a tunnel (inconsequential, slows down the story, and *nobody* would dig a shaft there).
- Trims to Zorin shooting his own men (to tone down Zorin's cartoon-villain excess).
- Cut shot of Stacey seeing the blimp coming toward her. It's bad enough that she can be taken by surprise by a blimp, but did they really have to make her *see* the thing and still not manage to escape it?
- Cut shot of Bond hanging from blimp, grazing a skyscraper antenna (bad & cheap joke).
- End on bridge. No Q, no robo-dog, no shower, no sex.
- Dub in Grace Jones "Storm" over the end credits (trimmed to fit). I love Duran Duran's song, but that already has the opening titles and many callbacks in Barry's score. The movie is better balanced by having a different song over the end credits.
- Add a brief post-credits clip: General Gogol offering an award for Bond. I enjoy Gotell's Gogol and his lines add to the story, so I didn't want to cut him just because I cut the shower scene. So here it is as a post-credit.
- I tested raising the center channel volume, as I found dialog was overshadowed by other sounds, but did not find the result to be an improvement. So the volume balance remains unchanged.
- I had intended to make a bunch more micro trims (for pacing), including further reducing the goofiness of the Parisian cabbie and the two-wheeled car. But I couldn't line up John Barry's score to make it work. I would've had to do a lot of sound replacement work and be stuck with inserting music from the CD (which rarely sounds seamless) for all of about 30 seconds of trims.
- Added FE logo.
Cover art by lapis molari (DOWNLOAD HERE) 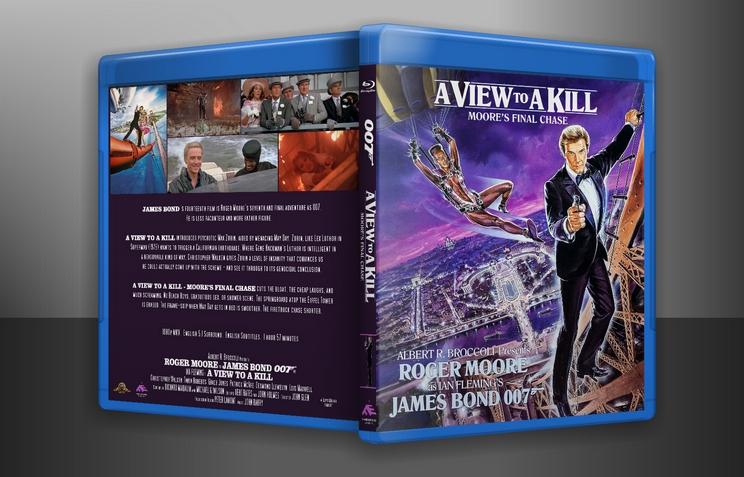