Attack of the Phantom Sith

Brief Synopsis:
Star Wars 'Attack of The Phantom Sith' is a fan edit which combines all the three prequels into a single less than three hours film. This Fan edit focuses more on Anakin Skywalker and his fall to The Dark side, reducing the politics, the cheesy scenes and lines, silly and childish moments and the romance to show a more believable Story of The character and it's universe and connect with The original Trilogy. Attack of The Phantom Sith does not only show the important things of The prequels, but, in my opinion, it's best moments and action sequences, with some modifications here and there
Intention:
I decided to make this fan edit because I don't consider the prequel trilogy bad, but after I watched them again, I felt they needed some adjustment. They have very important and nice moments, and this is my attempt to join everything that is enjoyable or important in this trilogy.
Other Sources:
The Soundtrack by John Williams of all three prequels
Special Thanks:
Thanks to José Guzman for giving me some interesting ideas when i was an intern in HBO. Thanks to my friend Sergio Vargas for his wonderful poster and thanks to Masirimso for completing the rest of the cover :D . Of course, thanks to all who gave me tips.
Release Information:
Digital
Cuts and Additions:
Because there are a lot of cuts I made in all three films, I will only write the main focus on each part of the story.

The Phantom Menace:
- Give the story a different direction, yet similar. It is explained in the Opening Crawl.
- Start the story in Tatooine, where Qui-Gon is looking for the parts of the ship.
- Introduce every important character
- Delete almost all the stupid Jar Jar Binks stuff
- Show character development in Anakin: His relationship with his mother and Padmé, his hopes and dreams, his skills as pilot and his desire for helping people
- Delete all the midichlorian stuff
- It is implied the Sith plan was to get Anakin since the beginning, because they sensed he is powerful.
- Add music to the Pod Race scene, with some cuts here and there to stay focus on Anakin.
- Delete all the politics stuff from Coruscant. Padmé goes to rescue her homeplanet after they repair the ship.
- Because I wanted to make look the Trade Federation is not as powerful as they look in the original movie, all the scenes with Anakin and Jar Jar Binks have been cut to focus on Padmé in the Theed Palace and Qui-Gon vs Darth Maul. The battle will look more easy to follow too.
- Introduce Palpatine as character after Padmé rescues her Naboo, but "Darth Sidious" won't be seen after much later to preserve the mystery.

Attack of the Clones:
- Introduce the characters, now grown up, with an action scene which will tell you everything you need to know to get updated.
- Delete all the vote against an army of the Republic stuff
- Show a better relationship between Anakin and Obi-Wan, so Anakin won't be an asshole with him or question his authoroty. This will help to sell the idea they had actual respect for each other and were good friends.
- Show a better relaionship between Anakin and Padmé, so Anakin won't be "horny" for Padmé or an ass with her. It will look like their feelings grow naturally and with flow, in a subtle and simple way. Making the love scenes shorter.
- Replace all the mystery of planet Kamino stuff with a deleted scene where Obi-Wan gets the trace to Kamino after making an analysys. The deleted scene was modified to get this effect.
- Show that Syfo Dyas does not exist, and imply in the end Palpatine was behind all the creation of the Army of clones. Makes more sense and it is less confusing. To get this effect done propperly, the scene where Obi-Wan is talking to the Prime Minister of Kamino and modified it to make it seem Obi-Wan was interrupted by the Prime Minister when he mentions Syfo Dyas. Yoda and Mace will seem confused after Obi-Wan mentions this Jedi Master.
- Focus on Anakin's return to Tatooine after Obi-Wan decides to pursue Jango Fett. We will get updated when Obi-Wan reveals he has been kidnapped by the separatists in Geonosis.
- Show the Senators giving emergency Powers to Palpatine. No Jar Jar Binks.
- Replace the factory scenes with two deleted scenes where Padmé tries to convince Count Dooku, who will be introduced in this part, to release Obi-Wan, but does not succed.
- Focus on Anakin and Obi-Wan pursuing Dooku and not showing the battle of Geonosis
- Delete Yoda fighting. I found it too silly
- Delete Dooku with lightnings. This is a trademark of the Emperor.
- Introduce the Dark Sith Lord Sidious after Dooku escapes Geonosis

Revenge of the Sith:
- Delete Grievous to focus only on Anakin after Obi-Wan leaves to fight Grievous
- Introduce Senator Organa
- Show how the Council does not trust Anakin and making him spy the Chancellor will make him suspect the Jedi might be into something, as Palpatine told him.
- Reduce the conversation of Anakin in the Opera, especially to make seem like Anakin blindly trusts the Chancellor and to cut the Midichlorians stuff.
- Add a flashback of Anakin's mother dying during the scene where he has an inner conflict about saving Padmé and helping Palpatine.
- Delete all the Emperor's lightsaber scenes.
- Make it look like Mace Windu went to confront Palpatine alone.
- Make it look like Obi-Wan went to the Jedi Temple to see if there were Jedi alive, not because of the decoding signal stuff.
- Delete all the Yoda and Palpatine fight to focus only on Anakin and Obi-Wan.
- The Battle of the Heroes was trimmed to make the battle shorter, better, emotional and more epic. And less silly.
- Remove the "she lost the will of living stuff". We can assume she became fragile after Anakin choked her and she felt. We will only hear "we are losing her".
- Add a deleted scene where Yoda arrives Dagobah.
- Trim the ending to make it look like while Vader is watching the Death Star being built, we see Padmé's funeral. Meanwhile, Leia and Luke are being sent to their homes, with voiceovers of Organa, Yoda and Obi-Wan.

Credits:
- Added the names of Liam Neeson, Jake Lloyd and Pernilla August
- Replaced music with Duel of the Fates and Battle of the Heroes
- After Credit scene: Organa orders to wipe C-3PO's mind. I had to put it after credits because in my fan edit, the scene did not fit the tone of the story and everything else.
Cover art by samspider3 (DOWNLOAD HERE) 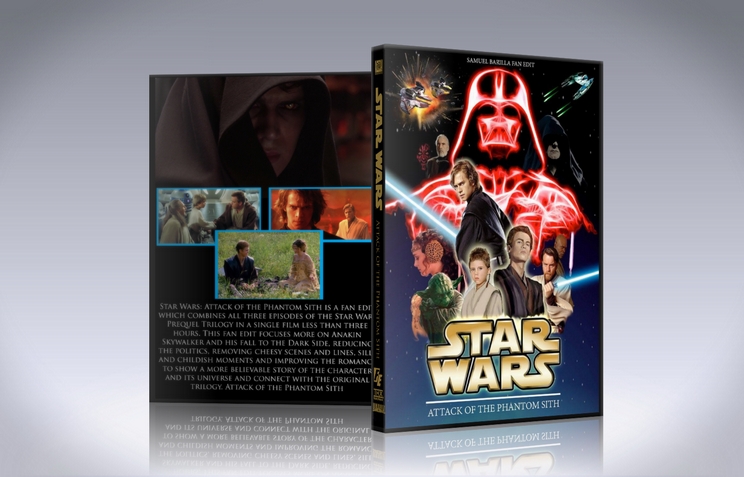 Do you recommend this edit?
Yes
Format Watched?
Digital
B
boazz750 Top 50 Reviewer 65 reviews
Report this review Comments (0) | Was this review helpful? 0 0
October 29, 2016 (Updated: December 09, 2016)
Overall rating
9.6
Audio/Video Quality
8.0
Visual Editing
10.0
Audio Editing
10.0
Narrative
9.0
Enjoyment
10.0
This assembly is certainly an improvement over the original movies, my only problem is the first third (TPM) does not match the story told in the following two-thirds, mainly in the last 20 minutes where history seems to forget Anakin and decides to focus on the history of the original films, it almost seems out of a completely different movie, but the rest of the assembly flows appear naturally and feels like a unique movie showing us a more credible transformation to the dark side and eliminating the most ridiculous moments, my another problem is that many of the deleted scenes (not all) had a very low quality and distracted me a little time perusing assembly. Oh and I love the idea of voices-flashback to get more in the mind of Anakin

Do you recommend this edit?
Yes
Format Watched?
Digital
A
a112 Top 500 Reviewer 11 reviews
Report this review Comments (0) | Was this review helpful? 0 0
March 15, 2016 (Updated: March 15, 2016)
Overall rating
7.1
Audio/Video Quality
8.0
Visual Editing
6.0
Audio Editing
8.0
Narrative
7.0
Enjoyment
7.0
Attack of the Phantom Sith is overall a good edit. It trims the movies down and removes the most offensive aspects of the trilogy. It is structured well, dividing the movie up into three acts; one for each movie, which show different stages of Anakin fall.

I just found problem with some of the editing however. Some cuts were very jarring and some scenes where quite short. The main problem also lies in the fact that these were originally 3 movies, filled with many characters and sub plots. So combing that into 1 film is a huge lot of information to take it.

But again, I did enjoy this edit. This movie was edited down nicely and is a great way of seeing Anakin's prequel journey from start to finish.