Time Machine, The - A Science Experiment

Brief Synopsis:
Trim the wandering around alone and the Morlocks. While perfectly unsettling and terrifying, befitting works by Hitchcock or Serling in 1960, they don’t work as well if you already know that he is going to meet people and creatures. The point of the story is the idea of the time machine and time travel, not the action/horror story of a square-jawed hero rescuing a blonde damsel-in-distress from scary monsters.
Intention:
H.G. Wells coined the term Time Machine in his eponymous 1895 book. It remains the yardstick that all time-travel stories are measured by. George Pal brought the story to life in the mesmerizing 1960 movie. This lush Victorian interpretation of the Time Machine has set the tone for much of the Steampunk genre. This masterpiece deserved a bit of tidying up for today's audiences.
Special Thanks:
Editingsithlord for the terrific trailer.
Release Information:
Digital
Special Features
Video: 1080p, 1:1.78
Audio 1: 5.1 Surround
English subtitles
Cuts and Additions:
1) Cut pre-title sequence of clocks flying across an otherwise black screen (44 seconds). It doesn't advance or strengthen the story. Perhaps it was created for the title sequence but it made the names illegible? I tried placing the clock sequence at the very end, as the screen goes black but before "The End". It added an ominous feel to Philby's closing comment that George "has all the time in the world". While not inappropriate for the film, I chose to keep the original ending which feels more curious than forboding about George's fate.
2) Replace the brief shot of the nuclear explosion with a better one.
3) Trim wandering around alone: less time alone in the jungle, and George doesn't stumble across the empty dome before he finds people (3 minutes).
4) Small trims for pacing as the Eloi walk morosely to the air-raid bunker.
5) Trim the scare-factor of the Morlocks.
6) Trim the exaggerated, Errol Flynn like, fighting style in the cave (20 seconds). George is more scientist than swashbuckler.
7) Some minor trims to Weena fawning over George. It fits the story, but added up it became annoying.
Cover art by lapis molari (DOWNLOAD HERE) 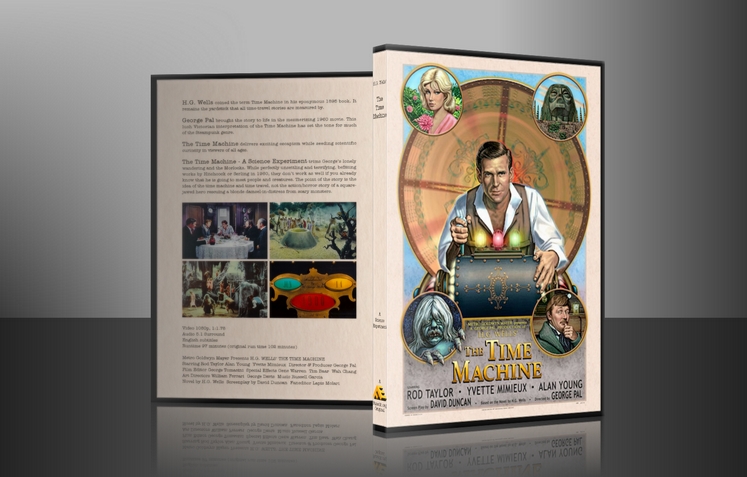