Brief Synopsis:
If the following strikes you as esoteric, I invite you to peruse the forums of Originaltrilogy.com.

I do not consider this a full-blown fan edit, as I am primarily hybridizing existing official versions of the film, keeping changes I can appreciate and excluding those I feel hinder the film. Of course, this is highly subjective, and everyone's perfect blend would be slightly different.
Intention:
Having satiated my restlessness with the Star Wars prequels, I wanted to put together a custom 'Special Edition' of the original trilogy to place on my shelf alongside the original, theatrical versions (currently represented by Harmy's Despecialized Editions). I thought about calling them the "So You've Decided To Watch The Special Edition" version, because they wouldn't be intended as one's sole version of the films. Rather, a companion piece to the original versions, as a Special Edition should be.
Other Sources:
The primary video source is the 2020 disc release, or “19SE,” first seen on Disney+, color corrected by OhTeeDee. The primary audio source is the 1997 Special Edition theatrical DTS audio. Exceptions are described in the list of changes. (Secondary source is the OTD version of ROTJ, partially restored to the theatrical version.)
Special Thanks:
First and foremost, credit is due to OhTeeDee for presenting the 1983 and 2019 versions of the film; CapableMetal, Jetrell1969, and SilverWook for their combined efforts at making the theatrical DTS audio from the 1997 Special Edition available; Team Negative 1 for producing 4K83; SkyDude for processing the 4K83 release; and ChainsawAsh for encoding a DTS mix.
Release Information:
Special Features
This project is presented in 1080p BluRay-compliant video, with DTS and AC3 audio tracks, and subtitles in English, Spanish, and French.
Cuts and Additions:
Here follows a list of changes made to the primary video and audio sources for this project.

- Overall color correction from OhTeeDee
- Used the original theatrical version of the opening logos
- Restored the original, sensibly sized door to Jabba’s palace
- Restored Lapti Nek, though the SE extension of Oola falling into the Rancor pit remains (two shots of Boba Fett alongside SE singers also remain)
- Used the original effects for Han’s carbonite slab thawing
- Removed the CGI dug that was added wandering around Jabba’s palace
- Removed the SE Sarlacc, with two shots being “despecialized” by RogueLeader
- Removed the added gizmos to R2 as he blows his stack after being shot by a trooper on Endor
- Removed the SE shockwave to the Death Star explosion
- Reinstated Sebastian Shaw portraying Anakin Skywalker’s ghost
- Two versions of this project exist: One with the SE 'planetary montage' ending and the original 'Yub Nub' ending.
- New subtitles for Huttese have been added, borrowing from Catbus’ Project Threepio in order to match the look and feel of the originals as closely as possible (these are noticeably fuzzier than the crisp subtitles seen on the 2020 disc)

- Other than changes needed to reflect the visual changes described above, removed the line “Wesa free” from Naboo during the ending galactic celebration montage
Cover art by Hal9000 (DOWNLOAD HERE) 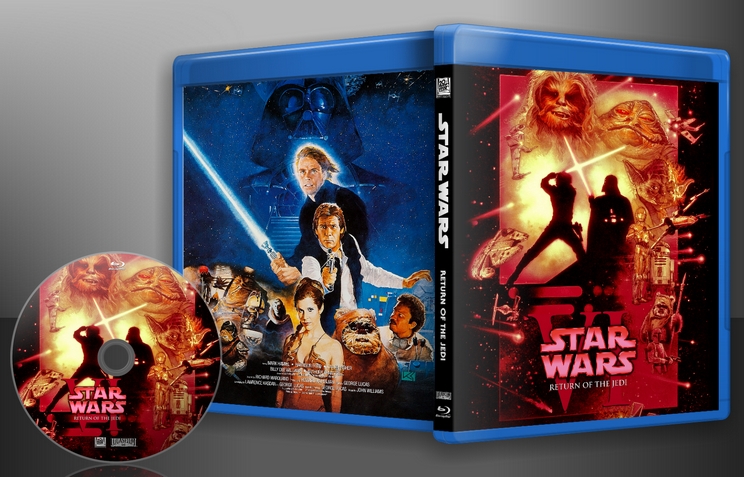