Brief Synopsis:
This cut concludes the story of the Definitive Anti-Cringe Cut of The Last Jedi. It removes plot points that go nowhere, reduces character appearences that do not move the story forward and changes the fates of key characters in the saga, once again providing some surprises for viewers of the original film.
Intention:
J.J.'s attempt at pleasing everybody resulted in an overloaded mess, that left both fans and critics of the previous installment unsatisfied. This cut attempts to bridge the gap by removing some of the retcons and "twists", reducing the roles of the new character additions, cutting back on the cringe and focusing on a satisfying conclusion for the character arcs of our main heroes (and villains).
Additional Notes:
This edit comes with both a Stereo and 5.1 Surround audio track.
Other Sources:
- Star Wars: The Force Awakens
- Star Wars: The Last Jedi
- Documentary of Skellige Island
- OST for Episode VII, Episode VIII and Episode IX
- Custom Crawl Tutorial by DigModiFicaTion 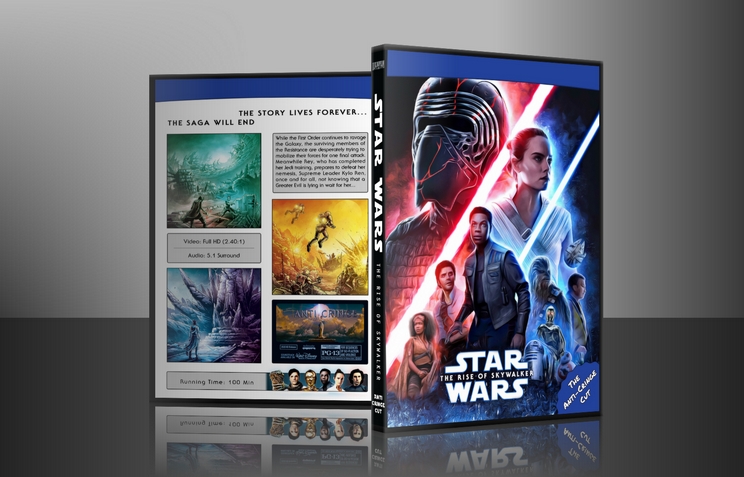 First things first, the technical for the most part is top notch, and most of the edits are seamless as they were in the first fanedit. But there are some issues that stand out. The Kylo Ren parked fighter looks totally unconvincing, especially since the black smoke is still rising right behind it. The flashback to Luke and Rey's discussion when Kylo is dying is a really good idea, but the sound clashes with the sound in the present scene. I think a silent flashback to the same scene, possibly supplemented with other scenes of them connecting in TLJ, would have achieved the same effect and fit more naturally. Speaking of, it's still painfully apparent that Luke is a Force Ghost during his talk with Rey, and the edits of him coming to talk to Rey stick out like a sore thumb for how unconvincing it is; in fairness, that's mostly because the editing for the most part is really high quality, but even so it just feels unnatural.

As far as the movie watching experience, it was okay. Granted, again, that's a huge improvement from "I wanna throw a copy of this movie into the sun". It had a fast pace that cut out all of the pointless scenes and allowed it to be really entertaining for the most part. I actually wound up enjoying the character interactions between the main trio far more in this edit. Unlike the first two movies, this edit allowed them to actually shine not just as individuals, but also as a team the same way Luke, Han and Leia did.. It really felt like they were the close friends/found family the movie was insisting they were, and made their "curtain call" after the final battle far more satisfying. Also, Kylo Ren's new death is a massive change that works in the edit's favor, and I love that it forgoes the painfully predictable route of him getting a last minute redemption, and instead shows him finally letting go of his anger and finding peace in death.

With that said, the story is dragged down by things that simply don't make sense. The first is Palpatine being the ultimate villain; it never should have happened, it makes absolutely no sense, and it takes away the feeling of victory of the end. After all, if he came back once, who's to say he won't come back again? Granted, this is in no way the editor's fault, and there's really no way around it short of a full reshoot. And moving the reveal to the end of TLJ does at least help make it seem a bit more natural part of the story. However, there are other story decisions the editor made that also don't make sense.

The biggest is Luke hunting for Exegol/Palpatine. He's leaving notes on his search for Rey, but where is he leaving these notes? They said his trail went cold on that desert planet, but then it turns out he's just hanging out on Ahch-To for some reason? Why is his X-Wing all of a sudden in the water if he's been searching for Exegol across the galaxy? And then when Rey shows up, she now knows the way to Exegol, so did Luke figure it out? If he did, why didn't he tell the Resistance? And if he doesn't, how did Rey figure it out? It can't be from Ren's fighter since she just destroyed it. Then there's Leia's body being kept since her death. I get the idea is she becomes one with the Force when Luke does, and it is a nice moment, but since she died in TLJ ACC, has the Resistance just spent months or a year carrying her body around everywhere until it just ups and vanishes? Also, why does Luke die at the end? In the TLJ it seems at least he died from the exertion of projecting himself, here he just up and dies as soon as the Emperor does. Like "Well, my work is done, guess I'll die now." It would have made a lot more sense if the reason he stayed behind was to channel all of his power into Rey, which would also help explain why she's channeling all of the Jedi, and the exertion of that was what killed Luke.

I still enjoyed the edit. In the end, this edit, along with TFA and TLJ ACC, does form a decent trilogy with a far more focused story arc than the "canon" sequel trilogy. It highlights the strength of the story and its characters. It's clear a lot of work went into these edits, and for the most part they work rather well.

Do you recommend this edit?
Yes
Format Watched?
Digital
P
patrick-graeme Top 500 Reviewer 18 reviews
Report this review Comments (0) | Was this review helpful? 1 0
August 08, 2022
Overall rating
9.3
Audio/Video Quality
9.0
Visual Editing
8.0
Audio Editing
8.0
Narrative
9.0
Enjoyment
10.0
Immensely enjoyable, to the point. Cut out all the dross. Would very much recommend to one and all.

Do you recommend this edit?
Yes
Format Watched?
Digital
P
patrick-graeme Top 500 Reviewer 18 reviews
Report this review Comments (0) | Was this review helpful? 0 0
July 01, 2022 (Updated: July 01, 2022)
Overall rating
8.4
Audio/Video Quality
9.0
Visual Editing
9.0
Audio Editing
7.0
Narrative
7.0
Enjoyment
9.0
After viewing TLJ. Anti-Cringe edit it was a must to jump to Donkamillo's work with its sequel. I tremendously enjoyed the editor vision on The Last Jedi killing Leia and sparing Luke for this one. However, those decisions brought consequences for the current work. In terms of narrative, I would love to see Donkamillo's story in theaters. Unfortunately, given the available source material it makes too difficult to apply drastic changes with the fate of central characters (i.e. Leia, Luke, Kylo) without compromising the overall quality of the work. I would not like to sound negative or giving the impression I am undermining this edit. It's the most aggressive and ambitious edit out there about the SW sequels and I certainly enjoyed it a lot. As I said, very powerful ideas that sadly imo cannot be depicted in the way they should because of the source material.

I certainly look forward to more edits from Donkamillo's in the future! Thank a lot for sharing your work!

I liked the edit and it's my favorite version of the film. I was just disappointed that I pictured the missed backflip in my head anyway. Maybe it should have just been kept in.

This is my first fanedit experience and fanedit review. I skimmed through the Last Jedi Anti-Cringe before watching. I tried to stay spoiler free.