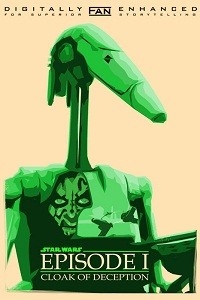 This is a stellar edit. Not enough to save the movie, but it's the best it can be without radically changing huge swaths of material.
The phantom menace is my least favorite star wars movie, and there's one big reason: it bores me to tears. Whatever about the unrealistic love plot of episode 2 or Anakin's unnatural character arc in episode 3, you could at least follow their stories and the characters had identifiable traits and relationships with each other. The characters here are 1-dimensional, some even round down to having 0 dimensions. The story is filled to the brim with unnecessary political drama that is too complex and dull to follow, yet too loosely tied with the jedi's actions to make it easy to follow either plotline. The jedi's part of the plot is devoid of energy and filled with unnecessary sidequests (Otah Gunga and Podracing), so it's hard to care about the "good" part of the movie either. No matter how you edit it, you can't make these characters endearing and you can't make the story engaging, all you can do is get it over with faster.

And that's exactly what Hal9000 has done, with benefits. Along with masterfully refining the structure and pacing, he has carefully extracted all character and story beats that one could find irritating. While there exists edits which make more dramatic overhauls to the movie, this is more like the definitive version of the movie that could still be identified as the same movie. It fits in with all the extended star wars content perfectly, and keeps the spirit of the original movie. Like I said, this doesn't make it into a movie that I'd revisit often, but it's pretty much an objective improvement over the original edit, and probably the best edit that doesn't mess with the original canon.

The star of the show here is the pacing. Perhaps contrary to what I said above, this doesn't cut every single unnecessary frame of the movie. Rather, it makes smart removals, carefully choosing what to trim, cut and retain. It doesn't seek to blaze through the movie as fast as possible, or else it would still be an unsatisfying experience. Instead, this edit keeps a brisk but steady pace, similar to the original trilogy. Otah Gunga is entirely cut (seamlessly, I might add), and political dialogue is cut up to the utmost essentials. As a result, the story is 1000x times more easy to follow, and nothing outstays it's welcome nor end too soon. Nowhere are the cuts noticeable. Instead of being the quickest way to experience the movie, it's the most satisfying way to experience the movie.

Cuts made to story and character moments are similarly well executed. The above mentioned cut of Otah Gunga means that the first act of the movie exclusively consists of the rescue of queen amidala and the running of the blockade. You know... events that actually set up the plot, and are at least mildly exciting? Unlike the huge distraction that waterworld was? Needless to say it's a great change. The update to Anakin's contribution to the ending makes it a massively more satisfying conclusion than what we got in theatrical. Child Anakin and Jar-Jar's cringworthy acting has been trimmed, but just like the overall pacing, it isn't completely gutted to the point of damaging the plot. That means that some cheese remains, and many viewers will dismay, but it really does help scenes flow in a natural way.

On the topic of the technical aspects, the only time I noticed a drop in quality was during the scene where Qui-Gon's gang encounters Darth Maul's droid and runs back to the ship and takes off after a brief duel. Many reviews mention certain deleted scenes looking quite bad in comparison. I personally did not notice, though the version I watched was newer and had a previously included deleted scene removed, so there could have been further updates to iron out those flaws. Besides, the scene i mentioned above was included in the theatrical cut (at least I'm pretty sure it is). Either way, I can't give the visuals a perfect score because of this, but it isn't anything to worry about.

To summarize, I can't give this a full enjoyment score because it remains that; a flawed, boring movie with flat characters and story. Don't go in thinking that this will fix the movie. But do go in thinking that this is a vast, vast improvement. Hal9000 has made a straight-up replacement to the original film. But if you seek a more radical approach with massive changes in service of making the movie actually enjoyable, you will have to search elsewhere (I suggest "The Phantom Menace: The Ancient Lore" as a starting point).