Brief Synopsis:
An all-new version of the film, Peter’s descent into the dark side is more established and compromising than ever before. Eleven minutes were cut and many subtle changes to the film were made to bring it into a new light, making Peter’s morally questioning journey darker, creepier and psychologically challenging. 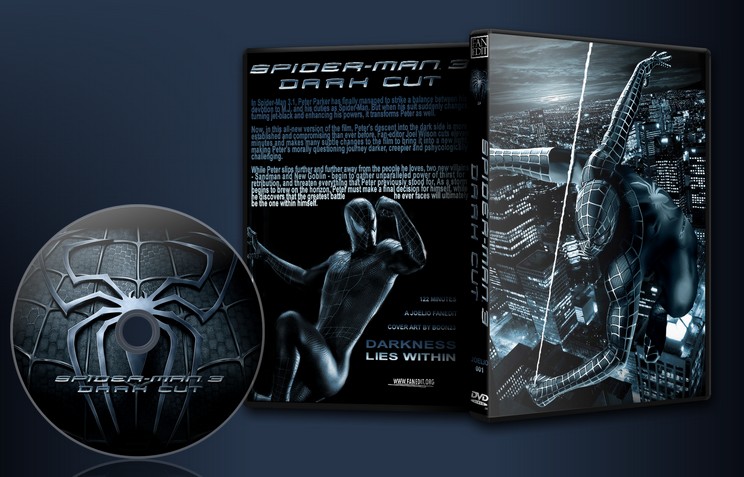 I watched your edit having never seen Spiderman 3. In fact I honestly did not even like the second Spiderman very much. But was interested in your edit, and I like to watch other peoples fanedits at least for reviewing purposes. I didn’t read your list of cuts in detail until after my viewing.

EDITING:
You’ve done a first-rate job with your cuts, re-arranging, changes, and decisions on what to change. Really, I am very impressed. There were no glaring mistakes, no bad audio transitions, and I honestly feel that it would be possible to show this to someone who hadn’t seen the original and not have them know it was a fanedit at all.

DIFFERENCE FROM THE ORIGINAL:
After reading your log of changes, I was even more impressed. Lots of crap has been removed here. Also, some of your additions were fantastic, I loved the flash frames of venom when Peter turns and hits MJ, that should have been in the original. Likewise the use of muted colors which then pop back into full color after he hits MJ was well done, and subtle enough that I only noticed when the colors came back. My only real complaint is that I did notice that the B&W flashback to peter looking at the black suit under his clothes was used at least one time too much, it was just too many duplicates of the same scene, and I don’t think it was necessary to sell us on the idea that the suit is changing his personality. Also, not really a complaint, but when Peter goes to the Jazz club with Gwen, it was a little weird when he excuses himself… then comes back a couple seconds later to ask her to dance. I wondered what he was doing. But I quickly excused it as there could be any number of explanations and it worked fine. I suppose if I did have another complaint it’s that I wish more could have been cut… but that is because I think it just isn’t a very good movie. The CGI fight scenes were horrible, and the plot was weak. I hated Sandman so much I was wishing that I could be seeing some sort of hybrid between your edit and the No Sandman Edition that came out recently (but I didn’t see that, so I don’t know how well it even works to remove him from the story). I like what you’ve done here though. Also I didn’t realize you replaced the music during Peter and Harry’s plainclothes fight, so it must have worked well enough for me.

Audio and video were great, no complaints.

I ended up converting the .mp4 file to a .mpeg to put it on a dvd. All I have to say is that I thought was that this was a solid fanedit. I loved the footage of Black Spidey swinging to see MJ at the park.

There are some things I would have cut. But I understand that the purpose was to take out enough to make it a darker film. I did like the change of not seeing MJ get off the elevator and Harrys and we just cut to them reading the play. Also, loved the second fight between Harry and Peter. the music that nows plays it with is very epic and operatic. which is what it should have been the first time around.