Brief Synopsis:
After the fight of his life against Russia's seemingly unstoppable Ivan Drago, Rocky Balboa finds himself returning home to America with not only the realisation that he's suffering from brain damage, but also that he's suddenly facing bankruptcy due to illicit dealings from his accountant. Unable to step back into ring, one last opportunity presents itself in the unlikely form of boxer, Tommy Gunn, a fan of Rocky's who asks the Italian Stallion to manage him and teach him everything he knows.

As one victory follows another, it isn't long before Tommy is eyeing up the heavyweight championship of the world. Along the way however, Rocky becomes so obsessed with tasting success again that he doesn't realise that he faces losing the most important aspect of his life - his family.
Intention:
The intention with this “80’s Cut”, is to try and trim some of Stallone’s over the top performance, remove all of the hip-hop music and replace it with 80’s tunes bringing it more in line with Rocky III and IV, address the issue of Rocky Junior aging about 3 years overnight and present a substantially shortened version of the street fight to make it more realistic.

About the Edit
Cuts and Additions:
- Opening sequence re-scored

- Removed scene where Rocky arrives back in the States to a fanfare and press conference.

- After Rocky visits the old gym and remembers his time with Mickey, have trimmed the following scene to remove the shots of Rocky and family moving back to the old neighborhood. Instead, have added “1 year later” caption and we cut to Adrian talking to Duke on the phone.

- Duke talking to Union Cane in his limo, cut.

- Cut Jewel's line to Rocky Jnr, "You know, for an Italian kid you ain't got a bad butt"

- Re-scored and heavily re-edited street fight to improve continuity and also to shorten the fight in an effort to make it slightly more realistic. 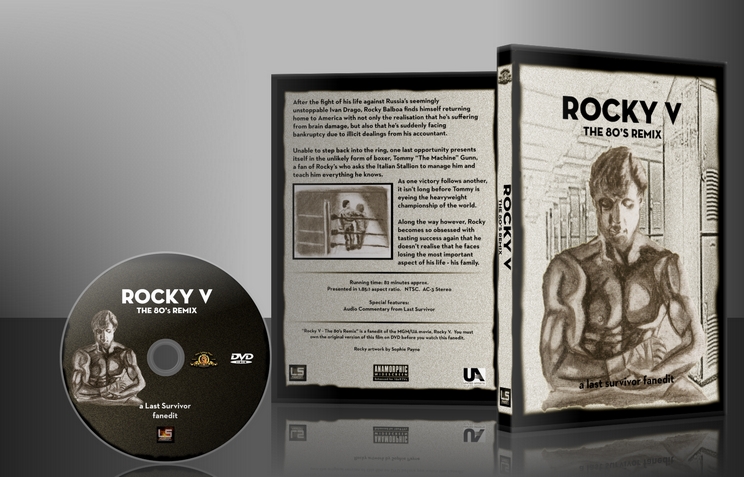 Do you recommend this edit?
Yes
Format Watched?
Digital
B
bailey Top 100 Reviewer 43 reviews
Report this review Comments (0) | Was this review helpful? 0 0
July 15, 2020 (Updated: July 15, 2020)
Overall rating
8.4
Audio/Video Quality
8.0
Visual Editing
9.0
Audio Editing
9.0
Narrative
9.0
Enjoyment
8.0
Much credit to LastSurvivor for rescuing this film and giving us a version I'm happy to watch with the rest of the series. John G. Avildsen (director of this film and the original Rocky) actually released a workprint "director's cut" online that addresses most of the same issues that LS identified here. It keeps getting taken down, so I can't watch to confirm if it's better or not, but you can see the director reworked the end fight, the training montages, the music, etc. Stallone also famously changed both the ending and his portrayal of the brain damage while filming. All of these are addressed and improved by this fanedit.

Basically, Rocky fans fall into two camps: those that really love III and IV but don't care much about the others, and those that really appreciate the more drama-oriented films in the series. Rocky III and IV are about 60% montage, and while they're great fun, it's hard to say that they're genuinely moving. Rocky V tried to come back to the original's Oscar-winning roots, but lapsed into a studio cash-in of a mess. What this edit does great is strip away a lot of the trendy ideas afflicted on Rocky V and allow the drama at its core to shine. It's one of the most realistic and depressing films in the series, incorporating tons of real-world issues that boxers eventually face in their career. Made in 1990, it actually brilliantly satirizes Don King and his Tyson-beating stooge, Buster Douglas. Stallone's script calls out the twisted business behind modern boxing, the politics of getting big fights, the engineering of fight records, the health-destroying injuries, the broken families. Almost everything that happens in the film ended up happening to Mike Tyson a few years later. The drama in this film is the great strong point, and the scenes between Adrian and Rocky have a chance to rise above and really reach the audience now.

It's not a perfect edit (for me), though. There are a couple of continuity issues created by the removal of scenes, for one. While the "one year later" on-screen title attempts to smooth over the change in actors for Rocky Jr., it's actually a 5 year age difference from Rocky IV! This could've been fixed with a couple more time tags, like skipping ahead 2 years when Rocky decides to open his gym, and another year or so when he starts training Tommy. Sage Stallone does actually look older by the final third of the film, when he's fully rebelling and wearing an earring. Cutting out the scene when he starts doing that makes it a little less obvious what he's doing though, and means Rocky's joke about the earring at the end of the film largely misses. Rocky Jr.'s dig at Rocky about "watching out for scams" also misses because the scene where Rocky walked him to school is removed, so he never says that. We also miss the line he references several times later about him and his son promising to remain tight. Also, this edit of the final fight ends up making it largely one-sided...Rocky hits Tommy roughly 200 times and never seems in real danger. It's a bit anti-climactic. Partially re-instating these scenes would better support the parallel stories of the 'two sons', and make Rocky Jr. seem like less of a needy whiner.

All that is not nearly as important as what the edit does right, though. The new music choices fit very well, and that alone is reason enough for this to replace the original. Not only the addition of cheesy '80s rock, but also more Conti music, and a saxy Gonna Fly Now reprise if I'm not mistaken. I didn't get why the pencil artwork was used for the film, until I rewatched and remembered his son becomes an artist. It's actually perfect then, in that the theme of this film is legacy and family, and Rocky focusing on his family instead of his boxing/boxers. However, I would've preferred the son's actual art in the film, particularly the lovely picture of Rocky and Adrian. This becomes the core of this movie for me, a return to the first film. The boxing should be almost secondary. Given how Rocky is dealing with what happens with his son and Adrian in the next film, Rocky Balboa, this film actually becomes stronger for how it sets this up. These scenes with Adrian are now really touching in context, and I wish that were the cover/dvd menu, rather than focusing on Rocky as the boxer.

All in all though, this is a much improved film that splits the difference between the two camps of Rocky fans. It's got lots of heart and personal drama, but it's also short and full of action montages and '80s rock. I don't think it's going to wow fans of either Rocky IV or the original, but it has now secured its place in the series.

Do you recommend this edit?
Yes
Format Watched?
Digital
M
mnkykungfu Top 50 Reviewer 116 reviews
Report this review Comments (0) | Was this review helpful? 1 0
July 23, 2015
Overall rating
8.8
Audio/Video Quality
10.0
Visual Editing
10.0
Audio Editing
10.0
Narrative
9.0
Enjoyment
8.0
im a fan of the rocky films and the fifth installment of the series is obviously the black sheep. you did a great job of re-doing it, and you made it better. its still not a great movie. i don't know how anybody could make it good, but you made it from bad, to watchable, fantastic job, and i can't wait to see what you did with rambo!! thanks last survivor!

I will say though, since you cut Duke's introduction, when Rocky learns he's broke him yelling he'll agree to fight Cain makes no sense.

Rocky V is still a pretty terrible film in my eyes, but this was much more enjoyable.

(I haven't listened to the commentary yet. When I do I'll add to my review.)

Do you recommend this edit?
Yes
N
neglify #1 Reviewer 462 reviews
Report this review Comments (0) | Was this review helpful? 0 0
November 07, 2012
Overall rating
7.9
Audio/Video Quality
10.0
Visual Editing
10.0
Audio Editing
10.0
Narrative
7.0
Enjoyment
7.0
it's been a long time since I've seen Rocky V, it's the film that came with the box set that I never had any intention in watching and the general feeling I had was that it is the weakest in the series. While this edit may improve a lot that was wrong with the original film I still found it to be a pretty bad film. The character of Duke is just a Don King rip-off while Tommy Gunn is for me the weakest villain in the Rocky series. And I do believe this is Sly's worst performance as Rocky Balboa, he's almost impersonating the character that I know and loved. The edit it self is extremely well done, I didn't notice any obvious cuts, while the only thing that stood out in terms of a scene that had been removed was when Rocky mentions Duke before we've had the chance to see just who he is.

the problem I have with Rocky V is that there is nothing memorable about the film, with Rocky I it was all about the underdog story, Rocky II had Rocky running with the kids running behind him, the double knock down and we still had a great villain in Apollo Creed. Rocky III introduced the world to Mr T and Hulk Hogan while Rocky VI has way to many memorable moments (I consider it to be one of the best worst movies of all time) while Rocky Balboa was made at a time when Sly's career reflected the character of Rocky. Last Survivors edit certainly gives us something memorable in the form of 80's soundtrack, which complements the edit making it seem a more natural follow up to part VI.

One thing that stood out for me was just how everything occurs within a short time span, most notable the character of Tommy Gunn who appears to have a 22 unbeaten streak within a very short period. It's very noticeable when after the last fight he has with Rocky as his trainer to his title shot match this seems to happen within a week. This is more of a problem with the film than it is with the edit but maybe a couple of title cards here and there showing that time has moved on would have helped, but that would of course would ask the question why his son never ages

Overall this edit is well done and I'm glad that it gave me the chance to watch Rocky V again, however I find myself in a strange situation that I enjoyed the edit but didn't enjoy the film. All I will say is that if your like me, your copy of Rocky V has never been used then this edit is a great excuse to watch Rocky V again. I've briefly listened to the commentary track in which Last Survivor gives an entertaining insight as to the changes he's made
L
leeroy Top 50 Reviewer 75 reviews
Report this review Comments (0) | Was this review helpful? 0 0
View all user reviews