Mummy, The: Year of the Scorpion

Added titles explaining the necessity of title cards
Added a prologue from The Mummy
Removed all scenes before the O’Connell Manor
Removed all references to Evy being a reincarnation of a long-dead princess. No, she isn’t.
Numerous trims to the fight in the manor.
Removed all references to Rick being a Medjai. This subplot had potential, but it’s superfluous.
Shortened Imhotep’s reincarnation. Rick and Ardeth don’t encounter awkward mummies in the British Museum, and they certainly don’t watch the rites without making any effort to stop them.
Various trims to the Museum sequence. Alex doesn’t talk about the golden pyramid’s diamond, Jonathan isn’t such a slobbering coward and the shootout is shortened.
The bus chase has been almost entirely excised. It didn’t move the story forward, and we’ve already had a lot of action.
We never see the painfully unfunny motley thugs alive. Who cares?
Various trims to make Izzy less annoying. Rick no longer threatens to shoot him.
Cut the twelve tribes of the Medjai. No way were there that many of ‘em!
Cut Ardeth’s silly bird in all but one shot.
Meela’s transformation into Anck-su-namun is now uninterrupted, and it’s in aged grayscale.
Alex no longer makes sandcastles; he merely draws maps.
The wall of water has been heavily reduced.
Ardeth doesn’t hold his sword to Jonathan’s throat, nor does he talk about Anubis’ army.
Numerous cuts to the pygmy attack to keep the story moving as quickly as possible.
Rick doesn’t outrun the sun.
Evy doesn’t die, nor does she get reincarnated and fight Anck. Jonathan doesn’t fight Anck either.
The Medjai don’t fight the warrior-dogs… at all.
The Rick vs. Imhotep fight is drastically reduced.
Most of the close-ups on the CG Scorpion King’s face have been removed.
The entire collapsing oasis scene is excised. Ahm Shere survives!
Heavy cuts to the denouement. The credits are now greyscale. The title specifies that it’s an edit.
Appended a Mummy 3 “best moments” reel.
Cover art by AvP (DOWNLOAD HERE) 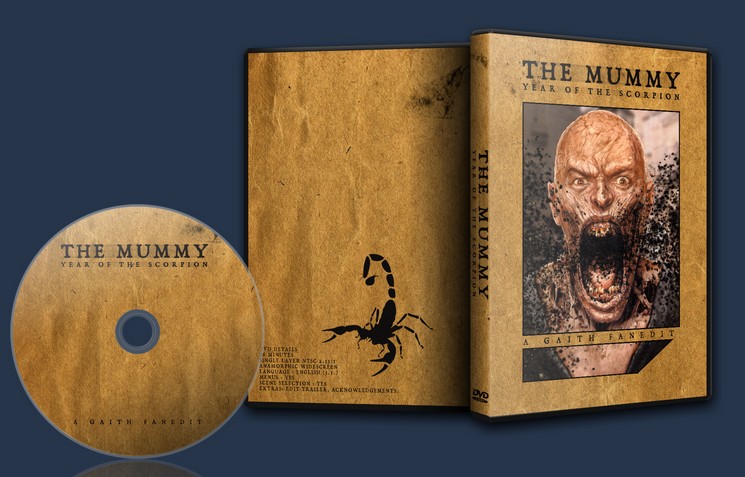 7 reviews
9-10 stars
0%
7-9 stars
71%
5-7 stars
29%
3-5 stars
0%
1-3 stars
0%
Overall rating
7.4
Audio/Video Quality
8.5(4)
Visual Editing
7.8(4)
Audio Editing
7.0(4)
Narrative
7.5(4)
Enjoyment
7.2(7)
Already have an account? Log in now or Create an account
View all user reviews View most helpful
November 16, 2020 (Updated: November 16, 2020)
Overall rating
8.0
Audio/Video Quality
8.0
Visual Editing
8.0
Audio Editing
8.0
Narrative
8.0
Enjoyment
8.0
I always liked this movie which seems like I'm in the minority, but it did have it's flaws which stopped it from being one of my favourite movies. This edit has it's good and bad edits and depending on how you view them this edit might or might not be for you, but for me I liked this edit as it cut out all the unnecessary parts which makes for a much shorter movie, but at the same time some of the scenes especially the action scenes felt rushed and ended to quickly just as the action was starting, also some of the audio cuts were noticeable. I did like the film restoration style of the edit and how the movie starts at the mansion as it makes the movie more mysterious about the object they have, I am also glad the Evy the reincarnation plot is gone as this never really made sense as well as the pygmy attack scenes which off all the attack scenes this one needed to be trimmed. So overall I enjoyed this edit slighty more then the original and would recommended it to anyone that liked the original.
Y
youngy94 Top 100 Reviewer 27 reviews
Report this review Comments (0) | Was this review helpful? 0 0
June 09, 2020 (Updated: June 09, 2020)
Overall rating
8.1
Audio/Video Quality
9.0
Visual Editing
9.0
Audio Editing
9.0
Narrative
7.0
Enjoyment
8.0
Overview - “The Mummy Returns” was a pisspoor sequel to 1999′s “The Mummy.”
The editor intends to reduce the nonsense, minimize the action overload, keep the charm.

Video - 720 X 480p mpg. (Curious, the first mpg I’ve run across here at FE.). Every now and then, scenes concluded with what felt like an axe. Some of the transitions were inspired, especially the use of title cards to make jump cuts.

Audio - 5.1 AC3. The sound is robust and luxurious throughout. The same quibbles I had with the video also apply with the audio.

Narrative - Half the film is cut. Most is action oriented, which was simply padding for an underdeveloped story. To my reckoning, the Alex / Lock-Nah interchanges could have been halved. The original was bad (I have not rewatched it in years). The edit barely makes sense, though it is cohesive. It is jumpy. I don’t even have suggestions to improve. Most of the deleted sequences were not structural, but action.

Enjoyment - Gaith provides an excellent article on the character Meela Nais. His thoughts on her backstory are useful to understanding his edit. His essay was in my thoughts as I watched, and it helped me appreciate his work. I enjoyed this more than the original, but the original was dismal.
Hey! Hang with the credits for an Easter egg.
Since Gaith released his edit (a decade ago), he has mused about reworking a V2.
I would be interested in that.

Do you recommend this edit?
Yes
Format Watched?
Digital
V
vultural Top 10 Reviewer 193 reviews
Report this review Comments (0) | Was this review helpful? 0 0
November 05, 2013
Overall rating
7.2
Audio/Video Quality
8.0
Visual Editing
8.0
Audio Editing
5.0
Narrative
8.0
Enjoyment
7.0
I don’t have enough to say about this movie to write an essay. I saw it once in the theaters and all I remember is the horrible CGI and parts of the finale set piece. This edit was a good little flick, intentionally cheesy without being too terrible, some fun action, good lines, etc. Title cards were a nice gimmick. There were quite a few jarring audio cuts.

If you’re a fan of the first movie I think you’ll enjoy this edit.

*This rating was given before reviews were required*
T
tehwallaby Top 500 Reviewer 27 reviews
Report this review Comments (0) | Was this review helpful? 0 0
View all user reviews