Brief Synopsis:
The Vice squad has a new commanding officer, Lieutenant Martin Castillo, a tough ex-DEA with a dark past. Crockett and Tubbs stumble upon a plot to heist a hotel vault and attempt to intervene, leading to the discovery of a much larger and more dangerous criminal enterprise involving an old nemesis of Castillo's from his days in the Golden Triangle drug zone. The Vice team is quickly forced into a game of cat-and-mouse with a deadly foe.
Intention:
This is the second part of the Miami Vice trilogy, a fanedit series of the best TV show from the 80's, full of fast cars, flashy lights, pastel suits, great music and bad dialogue. This film focuses on arguably the best-potrayed character on the show, Marty Castillo, played by Edward James Olmos who won an Emmy and 2 Golden Globes for his run on Miami Vice. Recolored, regraded, and with revamped audio, this edit is for fans and newcomers alike, faithful to the tone and story of the show, presenting the Golden Traingle arc in one film.
Additional Notes:
The edit is sourced from the DVD version of Miami Vice, as there is no Blu Ray release as of October 2014. As such the image is in 4:3 ratio and SD. The episodes used to make this edit were "Score/Golden Triangle p1" and "Golden Triangle p2". Also uses bits from "One Eyed Jack" and "Made for Each Other"
Other Sources:
Closing credits song: "Tomorrow" by Miami Nights 1984
Special Thanks:
maxgremlin for his great feedback, Studioeighty for the original poster design
Release Information:
Digital
Editing Details:
Miami Vice Season 1 DVD, Adobe Premiere Pro
Cuts and Additions:
1) Film opens with opening counterfeit bill scene from Made for Each Other
2) Castillo's introduction from One Eyed Jack inserted here
3) Credits recut
4) Crockett/Tubbs' walk up to Castillo at the hotel cut to remove credits
5) Cut Castillo's flashback to sea
6) Cut Castillo's first few lines with the crooked lawyer due to on-screen credits, replaced them with voiceover
7) Shortened Castillo's conversation with Crockett/Tubbs about the Golden Traingle
8) Cut Noog-man and strip club scene
9) Cut Switek/Zito's scene with Noog-man
10) Regraded footage to make reds more vibrant
11) Various cuts and trims for pacing
12) Removed all commercial breaks
13) Rescored end credits
Cover art by ranger613 (DOWNLOAD HERE) 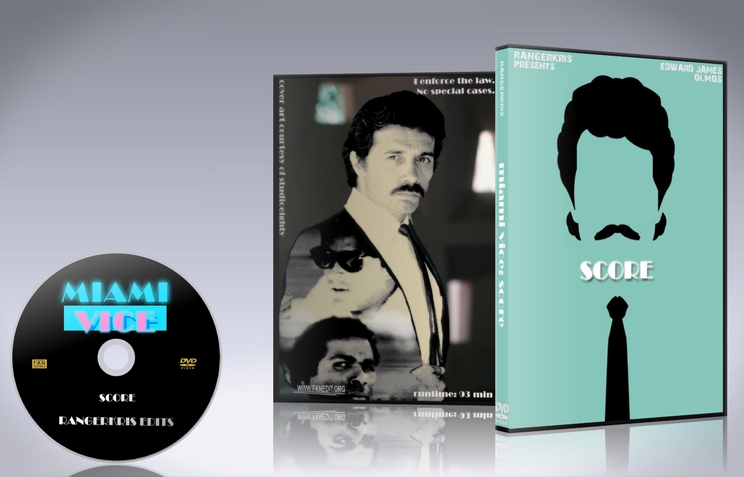 This story focuses more on the new police Lieutenant, Castillo, than on our previous stars. It would be kind of like if you show up to Iron Man 2, but by halfway through it turns into a War Machine story with Iron Man supporting. Hey, no problem, I love Don Cheadle. However, he doesn't pop in that role quite as much as Robert Downey Jr. does as Iron Man. We have the same situation here where Edward James Olmos just doesn't carry the show quite like Don Johnson as Crockett. Sometimes he's got an awesome intensity! .... and then sometimes he kind of just throws lines away. By the time he's performing in the reboot of Battlestar Galactica, Olmos has got the "gruff, quiet, intelligent, tough guy" thing nailed. However, he's still a bit uneven here, and you can imagine Clint Eastwood, for example, turning the same script and scenes into some really gripping moments. As it is, some are great (including a surprisingly good fight scene!), but I just noticed how Crockett and Tubbs popped in every scene they were in, and the Lieutenant kind of suffers by comparison. Even the guest star hooker in the beginning just nails all her scenes!

Okay, so that aside, the story is pretty interesting. I very much enjoyed how Ranger started with a quick scene of Crockett and Tubbs on the job before getting into the main story. It was also really interesting to see how they sort of tangentially slid into the main events by just following the dirt. The downside is that it really seemed like these events took place over a longer period of time (several episodes) but were kind of jammed together without any breathing room. At a point in the early-middle of the film, it felt like "and then this scene needs to happen, then that needs to happen, then the next event needs to happen..." The chain of events could've used some scenes in between to honor the passage of time, and even better if there were some classic Miami Vice moments of characters just moodily doing mundane things to music while they mull over the situation, like driving their cars or staring out over the water.

This all comes to a head when we have a conversation with Crockett, Tubbs, and Castillo where they're basically risking their careers for Castillo and tell him "hey, you've had our back plenty of times". But we haven't seen that...he was the new Lieutenant just 35 minutes ago! A few montages and/or subplots like in the beginning of the film would help to make that relationship feel earned, and to give the big events more weight when they do come up. At 90 minutes, the film could've packed in 20-25 minutes of subplot and not lost any momentum, imho.

The end result of this is that it tells a cool new adventure for fans of the original (series or fanedit), but I'm pretty sure with this one that it wouldn't hold a lot of interest for a non-80's fan. It's missing a lot of the atmosphere that made the show so addictive...the melodrama and brooding, the stylistic touches that felt like the show was a display of fashion and lifestyles as much as a narrative. With just a few tweaks, I think this could capture that flashy romanticism, but right now it just feels like '80s TV. Great '80s TV, but TV nonetheless. Part of that is probably the source quality (which looks like old broadcast quality, not a dvd) and part is style. I did really enjoy the audio tweaks that Ranger made, though, with some clever movements of dialogue over scenes, and a great replacement end credit song.

TLDR: This is a fine follow-up for fans of the original, and it moves at a pretty good pace. It did what every 2nd film should do: left me eager to see #3!

Do you recommend this edit?
Yes
Format Watched?
Digital
M
mnkykungfu Top 50 Reviewer 114 reviews
Report this review Comments (0) | Was this review helpful? 0 0
November 12, 2014
Overall rating
9.9
Audio/Video Quality
10.0
Visual Editing
9.0
Audio Editing
10.0
Narrative
10.0
Enjoyment
10.0
It's always good to see the vintage and versatile offerings of Olmos, and this edit packs a really hefty punch. With some inspired touches (the opening and the regrading) and seamless removal of promotional consideration, there's a lot to take in. This is something that's hard to describe at times because the experiance speaks better volumes than a couple of paragraphs. Do yourself a favor and let Ranger take you back to an adrenaline-charged era.