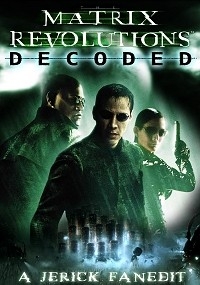 I too, long ignored the Matrix sequels for their infinite bloat, so opposite to the timeless and abundant first iteration - which I still esteem as a personal all-time movie favorite. Jerick's Decoded, however, expands so gloriously on everything the first one set in motion on action and worldbuilding, that in most merits it could be considered not only the greatest sequel ever but maybe even better than the original.

Its beyond amazing how the narrative from the back-to-back sequels is tied neatly into a single story rather than a two-part, a direct follow-up of The One's path that takes us along from the hidden doors in the Matrix to the steel-cold reality of Zion. The war with the machines is now the same personal conflict Neo faces in his epiphany, his journey for enlightenment is the choice in which the fate of humankind depends upon. There are no sideplots, no detours, no distractions. No frame or second is wasted, and all the characters have their place and role made crystal clear to move the story forwards. They do what they were made to do, and they know what they must know. It's so thematically fulfilling now, that the movie (edit) follows the mantra of purpose with the same devotion as its system inhabitants do. People are not having rave parties, crafting ammo, making love or getting stranded in train station limbo. The generous runtime of the edit actually spans a mere few hours to life or death of the human race. The stakes are high and there's a gripping sense of urgency throughout, and yet the pace is just perfect and the rush of events is only determined by their natural resolution.

The increased stakes, like so, inject a high-octane dose of adrenaline to keep one on the edge of the seat. The battle for Zion, particularly, has always been the most redeemable spectacle in Revolutions, but seeing it again by Jerick's point of view, its just breathtaking. I usually loathe the now widespread use of swarming drones CGI as a cheap trick to fake a sense of scale, but in the form of the relentless Sentinels against the whole of Zion's military might is truly a sight to behold. It remains a SciFi powerhouse hallmark that really shines in Decoded. The overall shift in focus when compared to the first movie is a clear narrative direction that sidelines the encounters inside the Matrix to highlight what is at stake in the real world. That unfortunately, is proportional to how good the sequences in these different realms look. Don't get me wrong, the practical and choreographed Reloaded sequences of the Burly Brawl and the Highway Chase are still stunt paradise, but honestly I expected them to be completely excised of the cringeworhty digi-doubles (ie. brawl Neo and Highway Agents). Whereas the Zion pieces remain impressive, the digital FX in the Matrix are still very fake-looking and could have been further trimmed.

It goes without saying by now that the editing is masterful, and while I have no gripes with seamlessness, there are some few bits that do feel contrived. Specifically when Smith confronts the Oracle and she barely reacts (to avoid changing actresses, I understand), and by the ending when Neo and Trinity travel to the Machine City. I thought Neo's lost sight was nicely handled, but there's an unsettling feeling that Trinity does not belong in the scenes that follow (rightfully so).

Lastly, I think the implied retrieval of Neo is a nice touch, but that last shot of the ship's winch should linger a bit longer before the credits roll, or... it should end with some scenes inside the Matrix explaining what actually changed there after Smith. We know that Zion is still standing but what does it mean for the machines? What is next for the humanity still plugged in the system? That's something that worked in the first movie before anyone imagined of watching a sequel, and I think it would do wonders for the edit instead of it ending so abruptly in the real world. There are, of course, some unused shots shown during the credits, including one with Sati, but since she plays no part on the edit, it makes no sense to show her whatsoever (or other scenes cut, for that merit). Also, the rave footage would be really badass if it kicked in along with Juno Reactor's beat during Navras, instead of making the whole of the end titles. Talking about titles, I'd love to have called it just "The Matrix Revolution" (in singular, yes).

I didn't think I needed Decoded before, but it lives up to its legendary status amongst fanedits.

Thank you very much for this glowing, lengthy, well analyzed review. I would point out one thing about the intention of the ending however, you mention that you would like some scenes showing what happened after Smith, and you also mention the unnecessary inclusion of Sati. My intention here was to use this character that has no story and no name in my interpretation of the film to show an average human going back to their every day life while the Matrix reconstructs around her at the end of the movie. This IMO is the only real scene in the sequels that can accomplish this goal. I think it plays a lot better if you forget that this was supposed to be a character with any importance. Again thanks for taking the time!
In reply to an earlier comment
Written by theprion
January 29, 2020

Hey, Jerick! Actually that is exactly what I assumed you were going for with Sati. But you're right, Revolutions is really scarce with the in-Matrix closure aside from the scenes with her, the Oracle and the Architect. Like you said, it didn't work for me because I couldn't help but recognize Sati as a character instead of a nameless child, but it probably works for a newcomer. Thanks again for the monumental work and for reaching out! Cheers!
2 results - showing 1 - 2
Fanedit.org does not host, provide links to, or sell fanedits. Do NOT contact us for such things. For more information please read our FAQ.
close
Toogle Down