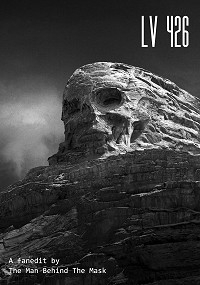 Prometheus remains, for me, a film that's much more interesting to talk about how it could have been great than it is a film to watch. The original film has a very mismanaged 1st act that, in the hands of most faneditors, is greatly improved. However, the second act is so glaringly awful that it destroys all of the film's momentum that its half strong third act barely gets the film over the finish line. Giftbearer, Special Edition and my own edit - Prometheus Unbound - all try to minimize the damage done in the second act, but admittedly all us have failed. TMBTM is also unable to meet this challenge, but he does go a long way in both improving the original material and finding something none of the other edits have presented.

TMBTM has invented a new way to approach the material with more tricks up his sleeves than any of his predecessors have employed. Envisioning the film as a direct prequel to Alien requires some re-purposing of scenes, clever dialog juggling, and impressive visual effects work. While the original concludes with David and Shaw finding their own ship to head off to the Engineer's home-world, TMBTM has successfully ended the film with all of the characters dead, and a single Xenomorph left alive on the ship, alone on planet LV-426. His third act, especially in comparison to the endings of all of the other fanedits that precede it, is worth the watch in and of itself.

I was sincerely hoping that TMBTM could somehow fix the roadblock that is the second act, marked by the crew's entrance into the dome. However, each and ever clever edit he does to circumvent one problem is often accompanied by another moment of awfulness that went untreated. In this version, David accidentally triggers the hologram recording - which is a great improvement - but he still talks to himself with exposition-friendly lines like, "Impressive," "Sweaty," and "It's organic." This edit removes the senseless line of Holloway saying, "This is just another tomb," but it keeps in dialog like, "Just like home," and "This is just one small step for man." This edit successfully removes the awful sex scene between Holloway and Shaw, but keeps in the even worse exploding head sequence. I understand that, to one degree or another, I have preferences in these regards. However, I think there is a very strong argument to be made that despite removing 30 minutes from the movie - as impressive as that may be - there is still room to make it even more tighter than I ever thought possible.

Regardless, the second act of the original film is painful and so it goes with all of the edits, including this one. However, the third act is where this edit really shines. The momentum of the film finally starts to come back after the Cesarean/abortion scene. The surprises that follow, especially starting with the confrontation with the Engineer to the edit's closing shot, are totally unexpected and a drastic improvement over all of the versions of this film - including my own. While Prometheus will remain a deeply flawed movie, this edit goes a long way to create not only a more positive experience from the original, but something completely unique compared to all of the other edits that are out there. Strongly recommended.

Audio/Video Quality - I sense the choice to make the film in black in white is less about artistic purpose and more about making the deleted scenes and visual effects work appear seamless. The film was not shot with black and white in mind and a lot of shots suffer on account of it. There are no bitrate or pixelization issues to speak of.

Visual Editing - Nothing out of place here such as flash frames or obvious continuity errors. I am overtly familiar with the source material, and only a moment or two felt like something was missing. For example, the way Janek responds with, "I'll have you know this once belonged to..." without Vicker's first commenting on it didn't feel right. However, such moments will be completely missed by casual viewers. The added visual effects are successfully blended in such that few will complain unless they are expecting the ILM quality from a fan edit.

Audio Editing - There is impressive audio work that includes adding music and changing dialog that is completely unnoticeable to the casual viewer.

Narrative - The surprises in the third act overwhelm the challenges of the second act.

Enjoyment - I found this to be the most enjoyable edit of the film to watch, including my own.

One thing though: I have worked hours to color correct every deleted scenes and make the new effects shots looking all right. That work was almost completely done and I really think it could have been released this fanedit in color.
The black and white is all about artistic purpose. It just looks beautiful to me and I don't feel a lot of scenes suffer from it (if any).

The "one small step for mankind" dialogue part is slightly edited. I think this line works better now (little lines like that are rarey upsetting me, but, yeah, Holloway have a lot! I thought this one was not bad, just not well delivered and with bad timing)
I don't mind David talking to himself, describing things. It shows the robotic side of him somehow.

But you are right in saying more things could be cut. At one point I considered doing a short edit (about 30 minutes).

Thanks again for the review :)