Brief Synopsis:
This fanedit turns Prometheus into a direct prequel to Alien (1979) by turning the planet LV 223 into LV 426. It's more "direct to the point".
Intention:
I liked Prometheus all right at first viewing but it was not what I expected. Too much talking for nothing. But the worst aspect was that it looked so close to being a direct prequel of Alien (1979) without being one, that it was a letdown for a lot of people. During the movie, you tell yourself, of that's the ship! Yes, but it's not the same. It's also not he same planet. not the same monsters, not a prequel....

In fact Prometheus used everything fans wanted to see but at the same it tells them, no, it's not what you wanted. So in the end the movie was frustrating. This fanedit tries to make it looks less frustrating.
Other Sources:
- Deleted scenes from the Prometheus Bluray
- Few seconds of Alien (1979)
Special Thanks:
Thanks to L8wrtr for his feedback on the workprint and for his help on the making of the Bluray version (soon the be released)
Release Information:
Digital
Special Features
The m2ts versions and the Blu-ray version will have English and French subtitles.
Editing Details:
Everything in my edit turn around that goal of making the planet LV 426. I tried a lot of editing choice before using the ones I was the most comfortable with. At one point the edit was quite long and more special effects were made, but in the end I was not happy wit the result, so I chose to make something else and it became shorter and, IMO, more efficient.

I removed everything that did not make the plot move forward but at the same time I added some deleted scenes to flesh out some characters. I turned the whole movie black in white (it serves the purpose of a prequel and it looks great). I added special effects here and there. I switched scenes. Used lips sync. Every little tricks that a faneditor can use!
DVD Cover art by TMBTM (DOWNLOAD HERE) 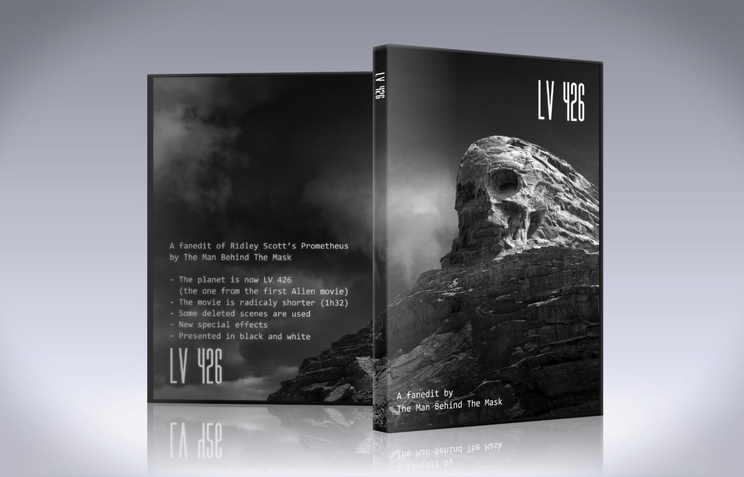 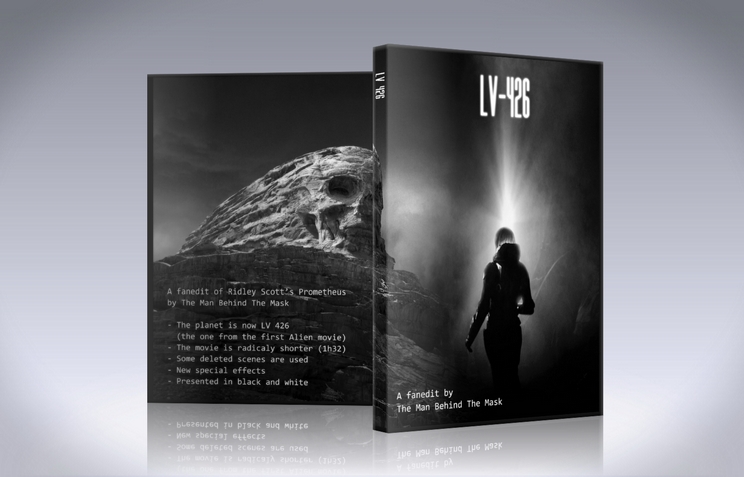 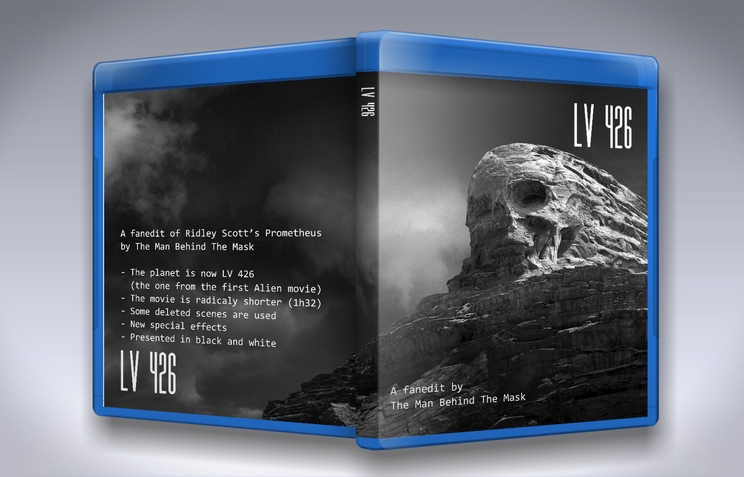 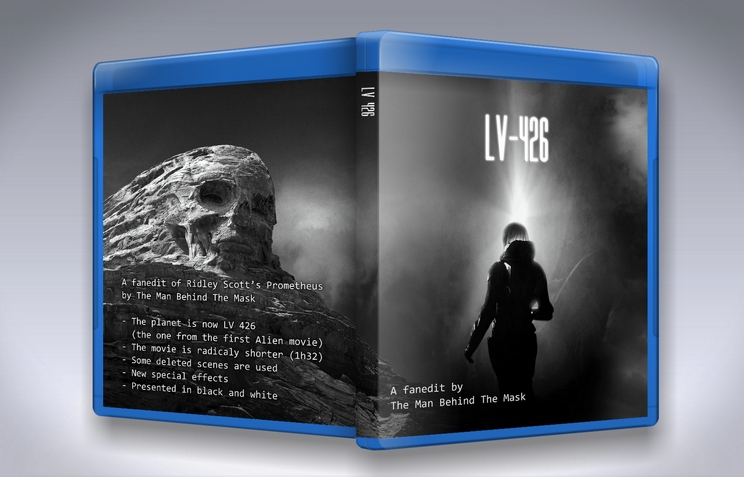 LV 426 Fanedit from TMBTM on Vimeo.

Do you recommend this edit?
Yes
Format Watched?
Digital
X
xenomorphnumber13 Top 1000 Reviewer 2 reviews
Report this review Comments (0) | Was this review helpful? 0 0
March 08, 2019
Overall rating
10.0
Audio/Video Quality
10.0
Visual Editing
10.0
Audio Editing
10.0
Narrative
10.0
Enjoyment
10.0
I loved this edit! It makes much more sense than the original and feels like the alien prequel we should have gotten. Would be nice if there was a colour version available.

Do you recommend this edit?
Yes
Format Watched?
Digital
W
wilhelm-scream Top 100 Reviewer 48 reviews
Report this review Comments (0) | Was this review helpful? 0 0
August 18, 2017
Overall rating
8.2
Audio/Video Quality
10.0
Visual Editing
8.0
Audio Editing
8.0
Narrative
8.0
Enjoyment
8.0
Prometheus, while most would agree is a beautiful and thought-provoking film, is also incredibly divisive. Some, like myself, praise the mystery it has injected into the Alien franchise, while others have derided it as containing unbelievable characters, too many open ends, and even of not being a true prequel. This last point of contention certainly has some truth to it, as Lindelof’s entry into the project sought to distance it from established Alien continuity, and take the story into the uncharted realm of the then-called “Space Jockey” race as Ridley Scott wanted.

Enter The Man Behind the Mask, a prolific fan editor behind such edits as War of the Stars (the Grindhouse version of Star Wars) and the heavily shortened Kong. TMBTM’s vision for Prometheus is rather straight-forward: change LV-223 to LV-426 to make the film a direct prequel to Alien. This isn’t as simple as just changing the name of the planetoid on a star map and calling it a day, however. LV-426 is in many ways a radical departure from Prometheus, losing over 30 minutes of the original runtime and using new VFX work to alter the ending.

Taking a cue from JobWillin’s Derelict fanmix, TMBTM presents the film in black and white. While it looks great, I don’t know exactly why he went with this aesthetic. While Derelict is presented in this way to better marry the distinct visual styles and color palettes of two different cinematographers separated by 33 years, LV-426 doesn’t have this disadvantage, so what’s the point. Oh well, like I said, it doesn’t look bad at all, so there’s that.

Right off the bat, there’s a big difference: the entire opening. Gone are the ‘Beginning of Time’ and Isle of Skye sequences, replaced with voiceover from Shaw’s video message to Peter Weyland, pulled from one of Prometheus’ blu-ray features. This greatly speeds up the narrative, a theme that is carried through the entire film. In some spots, deleted scenes are used to fill the gaps, and with the exception of one, I enjoyed seeing all of them put back into the film. On the other hand, some other editorial changes I wasn’t too fond of, like the loss of David’s viewing of Lawrence of Arabia and all subsequent references to it, some of the humorous banter between Fifield and Millburn, and the wonderful ‘Navigational Map’ sequence, in which David activates the computer aboard the Engineer vessel. I also wan’t a fan of the repeated line, “The trick is not minding that it hurts.” Once was enough, and it is in no way better than another line it replaces at one point: “Big things have small beginnings.”

Video and sound quality are in tip-top shape, presented in over 15 mbps. The soundtrack is in 2 channels with what sounds like a Dolby Digital encode. It’s pretty solid, and has a bit of surround activity, or as much as can be expected in a stereo presentation. New VFX work is very subtle and almost unnoticed at the beginning of the film, but the biggest shots come at the very end. Beware, spoilers:

TMBTM removes the end ‘Deacon’ scene, instead digitally matting the creature into the Engineer as he is locked into the command chair, thereby revealing him as the dead Engineer from Alien, and the Deacon as his killer. This is a bold vision, but not one without its own set of discrepancies. If the Juggernaut from Prometheus is the Derelict from Alien, why is it fossilized after only several decades? What happened to the planetoid that so changed its environment (listen closely during Alien to discover that the Nostromo team’s walk to the Derelict occurred during the day–why is it so much darker than in Prometheus)? These problems certainly show how a direct sequel to Alien was certainly not the best direction to go.

That being said, TMBTM’s edit is a fun way to kill an hour and a half. It’s stark and beautiful, its tight and suspensful, and it uses the much better Xeno-Fifield scene that so many fan editors are enamored with. It is not my prefered version of Prometheus, but I enjoyed my viewing, and that is way more than what I expected going in. Recommended as an alternate view of what could have been.

Do you recommend this edit?
Yes
Format Watched?
Digital
S
sistros Top 100 Reviewer 37 reviews
Report this review Comments (0) | Was this review helpful? 0 0
March 26, 2017
Overall rating
8.5
Audio/Video Quality
10.0
Visual Editing
9.0
Audio Editing
9.0
Narrative
6.0
Enjoyment
9.0
Ah Prometheus, I have such mixed feelings about you. I remember being really excited for Ridley Scott to make another Alien movie, no matter how much he and the studio lied, saying it was NOT connected to Alien. The trailer was pretty awesome, had some solid stars in it (Michael Fassbender, Charlize Theron, and Idris Elba), and the trailer music was freaky cool! But then the movie came out and it was... fine, I guess. The characters make nonsensical decisions, Guy Pierce looks awful in old man makeup, and the engineers are just bizarre. Also having it be ANOTHER planet was really REALLY stupid. But thankfully The Man Behind The Mask decided to try and fix up what he could and tie this in better with the rest of the Alien series.

First off, editing the movie to omit any reference to this being a different planet was SMART. I mean we've got the engineer pilot with the chestburster EXACTLY like in Alien. You're telling me that's on a different planet? GTFOutta here! Good fix. The decision to make this in black and white was a bold move. At first I was kind of put off by it. Like the film quality is really high so being in black and white didn't make it seem like an older film. But given about 10-15 mins I started to like it a lot. I realized it helped desaturate against a lot of the excess color in the original cut while giving it it's own (non) color palette feel like how Alien was muted yellows and white (cool), Aliens was deep blues (sweet), Alien 3 was industrial molten steel red (umm, what?), and Alien: Resurrection was lime green (yeesh). So good on you for that!

The rest of the edit is a mix of fixing the character motivations, taking out excess engineer scenes with no true value, and keeping the pace going. I really like what was possible given the available footage. If I had my choice I'd prefer to recast some people (like discount Tom Hardy with yknow REAL Tom Hardy), rewrite half of the script, and have the spaceship NOT roll and crush Charlize Theron who should have JUST GONE TO THE SIDE LIKE 3 FEET... but beggars can't be choosers :) This is the best cut of Prometheus out there. Someone get it to Ridley Scott ASAP so he can fix whatever he's done with Alien: Covenant before it's out in theaters.

About the argument about "they should have gone to the side" when the ship was rolling behind them. Well, in fact there's a shot where Shaw and Vickers DO run to the side.
BUT he ship also rolls the same way, so visualy it's not super clear for the audience.
Plus on each side of the ship there are big elements on fire falling down like bombs, so it's not super engaging to change course...