Intention:
As much as I admire HULK, it didn’t lend itself to repeated viewing. Ang Lee’s film is a thinking man’s Hulk. But hey, you know, sometimes you just want kick ass action and what little action there was in HULK, it was lost admist the angst and inner turmoil of the characters. We lose the backstory, the flashbacks, tighten up the action. Starts with the Accident at the lab and try to keep the Hulk on screen as much as possible.
Additional Notes:
PROJECT TIME: planning: no planning. editing: A month at least… maybe more. Nearly killed me. I guess I should have planned. sound editing: 2 days trailer: HULK HATE PUNY TRAILERS! DVD layout and features: About 3 hours. Hey, I’m getting good at it. persons involved: Need you ask?
Release Information:
DVD
Editing Details:
Marvel Comics boomed in the ’60s by giving its superheroes angst and depth. In HULK, Ang Lee takes that depth to wrenching extremes, squandering the bold action and lively fun at the heart of the material.

Strong characterizations and meaty themes can carry comics movies as well as they do domestic dramas, as Batman Begins and Spiderman 2 have shown. But that’s where director Lee and his screenwriters fall flat.

Their tale is more confounding than compelling, with inconsistent characters and gaping plot holes. They also turn what should have been the first act, their protagonist’s origin, into the entire 138-minute movie — a hulk indeed.

When approached by the studio suits to direct this effects extravaganza, Ang Lee replied “I don’t know how to make a superhero movie, but I do know how to make a Greek tragedy.” So that’s what he did. And apparently, the studio guys freaked out because that’s exactly what he delivered. It’s almost as if Lee resented having to put the big green guy in there at all. His appearances feel almost grudging, but by the time he really gets to rip loose, nothing makes any sense.

HULK is a movie where a bloody long backstory about military science labs worked itself into the story of Bruce Banner (Eric Bana), whose new contraption in the lab goes wrong, zaps him, does something all nutty with his genes and turns him into a big green monster who goes around stomping on things. The green guy has a life of its own, but gets a King Kong sentimental streak whenever he sees Bruce’s girl Betty (Jennifer Connelly). And there’s a lot of stuff about the military trying to get the green thing under control and capture its DNA to make invincible soldiers. The bare bones of this, I don’t have a problem with. But why does it take so long to unfold when it’s so simple, and why is everyone imbuing it with significance it doesn’t have? It’s a simple mad-scientist yarn, but Lee treats it with the stark solemnity of The Ice Storm and the emotional gravity of a Shakespearean tragedy. And the direction had to have been something like, ‘Please deliver your lines as slowly as possible.’ Which resulted in every actor staring for long periods of time, and dialogue stretched to forever.

The problems - and there are a ton of them - lead back first to the script. There are three writers credited for the screenplay, which might account for the varying approaches to the telling of the story. First, there’s the human story, which is far too lengthy and relies heavily on flashbacks to establish and reveal key plot points. We may accept Betty’s loyalty and devotion to Bruce, but a few sparks in the relationship could have ignited some emotional excitement and made us care a little more about them. They knew pretty well how to get to the Hulk, but once they had him out, they didn’t know what to do with him, or how to motivate each scene to logically piss off the usually-reserved Banner so he could go all green and bumpy again. Some of the beats leading up to this are completely ludicrous.

Somewhere in the middle of HULK is a big, dumb, noisy movie trying desperately to get out. You get a cool helicopter battle (in which things are smashed to pieces but you hear “I’m okay!” on the radio, just to keep that ol’ PG-13 rating intact), but you’re subjected to a lot of angst in the meantime. Of course the transformation from man to hulk is the moment we have all been waiting for, as eyes contort, muscles bulge, clothes rip and the massive green monster is revealed. The effects are extraordinary and there’s no question that the ILM ‘wizards’ worked meticulously to paint 100 layers of skin for veins, blemishes, hair and winkles as well as creating over 1,000 different muscle shapes for the range of movements required by the Hulk. Co-ordinating the action with the CGI is no mean feat, although I worry that some of the scenes of the Hulk flying the air makes him look somewhat like a giant frog making gigantic leaps. Entirely computer animated, the Hulk looks as expressive and real as we can reasonably expect of an unjolly green giant. He’s also credibly integrated into live-action footage. But for all his beastial glory, the near-mute monster (he speaks two words) is underused. He’s barely seen during the first hour, and his action is often shrouded in darkness, a technique better suited to shabby effects.

His best bout is in full view: a sunlit desert scene in which he tangles with tanks, crunching and hurling them across dunes with contemptuous fury. Since writer Stan Lee and artist Jack Kirby created the Hulk in 1962, such astounding feats have been the bulky bad boy’s bread and butter. Here, they’re simply the sauce for a portentous souffle that never truly rises.

So Remixed by Jorge’s effort is to find the Beast behind the Man. Lose the backstory, tighten the action, move it along and deliver an action-packed summer thrill!! Enjoy.
Cuts and Additions:
- Lose the opening credits, backstory.
- Start with CBS report and the Banner Journals.
- Then with the Test on the frog.
- After accident, soon changes into Hulk.
- Lose the Central America ending. Now the Hulk is still running free.
- Many more cuts.
Cover art by Remixed by Jorge (DOWNLOAD HERE) 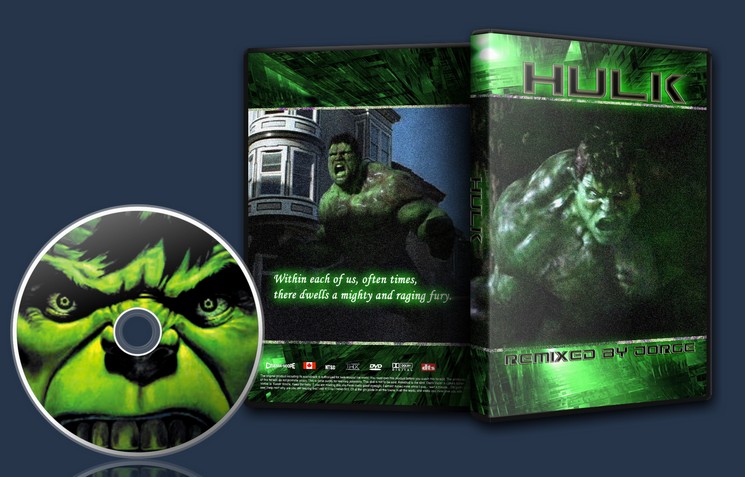 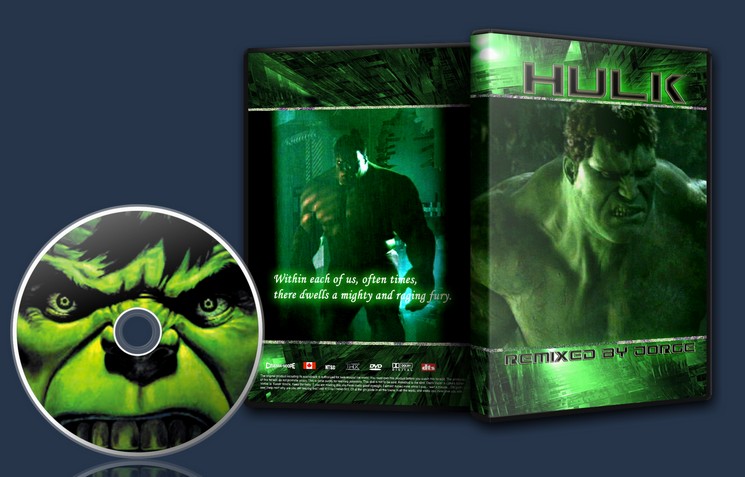 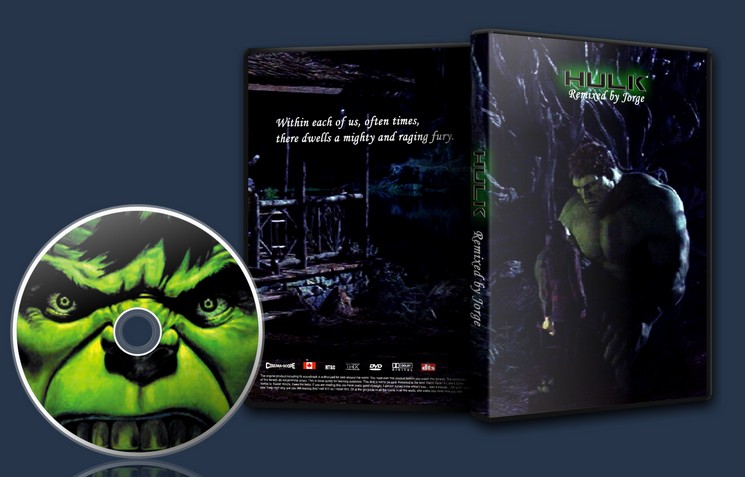 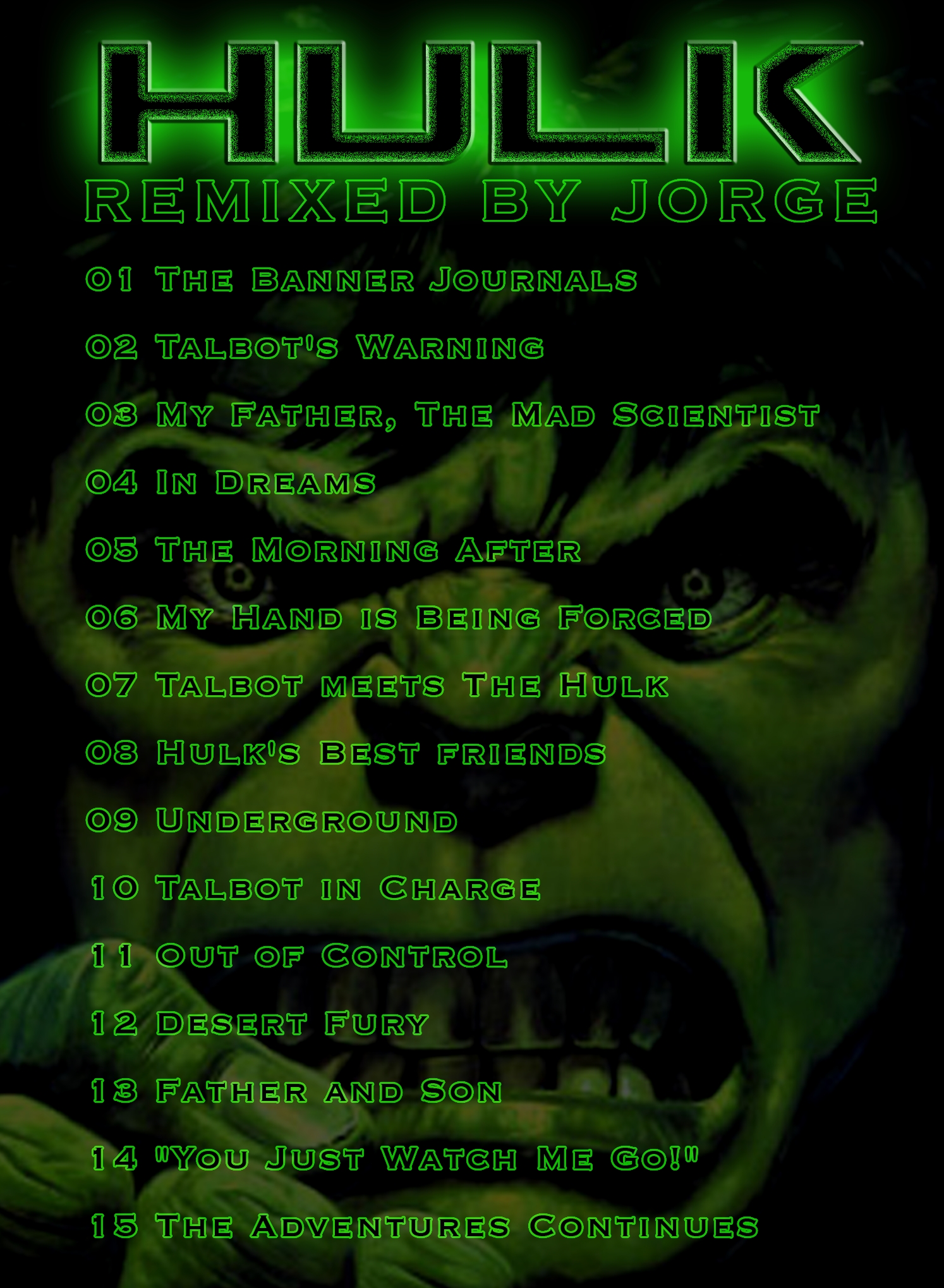 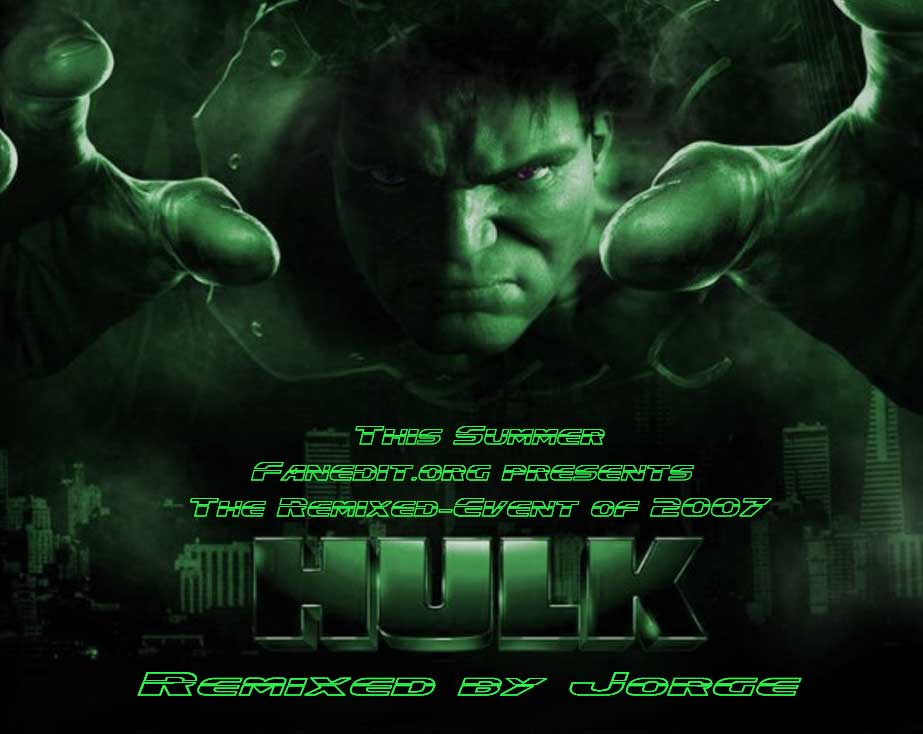 The edit:
This is a 1h version of Ang Lee’s HULK. More than half of the movie went into the trashcan – and I might add: rightfully so. The original was for many people an unbearable piece of junk. Dragging, long, ridiculous, badly acted, overanimated etc.
The new version is tight and follows a clear plot: The Hulk is revealed through the failed experiment, confronted by his mad scientist father, persecuted, tortured and experimented with by the army and finally … see for yourself.

The edit works great. It is a huge improvement over the original movie, at times it is really fun to watch it, thrilling, entertaining and Jorge managed to get rid of so much of the over-animation. This Hulk rocks.

I enjoyed watching it a lot for about 50 minutes, then the finale started and once again I found myself thrown out of the movie. I just didn’t get it. All this transforming of power and objects, well, too weird for me.

The image edit quality is perfect as is the audio edit quality. One huge problem is the low volume mix of the DVD. Without surround system it is really very quiet and increasing the volume with the remote to the max unfortunately leads to white noise.

Audio quality:
The audio is great, yet suffers from a low volume level. This is the one problem of this edit, but could easily be fixed.
audio: 3 of 5

It is nice and effective. Still it could be improved a lot by adding animation, sound, extras. The cover art, disc art and slip are cool.
presentation: 4 of 5

resulting in a 4 of 5 overall rating from me. Would have been 5 of 5 if the audio was louder and the finale would have worked a bit better (which is of course subjective – as is this entire review)

Conclusion:
This is about the best what can be done to the HULK. Congratulations for creating such a cool movie from this, what many would call unsalvageable. This shows once again the great potential of fanedits and for me this replaces easily my original DVD in my shelf. For this fanedit lots and lots and lots of work was needed and it clearly shows. I am a huge Jorge fan and I tend to stay one, because he won’t let me down.
B
boon23 Top 10 Reviewer 154 reviews
Report this review Comments (0) | Was this review helpful? 0 0
September 14, 2012 (Updated: September 15, 2012)
Enjoyment
8.0
Review by Istvan6 — November 16, 2008 @ 3:53 am

*This rating was given before reviews were required*
J
joebshmoe Top 10 Reviewer 234 reviews
Report this review Comments (0) | Was this review helpful? 0 0
View all user reviews