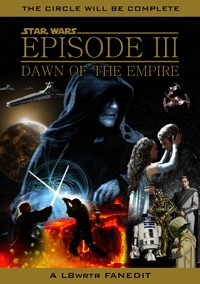 L8wrtr’s DAWN OF THE EMPIRE.

WARNING there may be some SPOILERS in this review.

Over three years in the making.

The level of passion, commitment and love one must have for this material to endure and stay on track that length of time is astounding. And it shows in every choice made — every cut, every resequencing, every audio choice — it is all deliberate and well thought out. Nothing is done haphazardly or without considering all the consequences. It is clear from scene one that there is specific vision at work.

Each of L8wrtr’s Prequel edits has been an improvement over the original is terms of character and story structure. And each Prequel fan edit has been an improvement over the previous edition, as his skills and tools improved and the story became more and more focused. With DAWN OF THE EMPIRE, L8 may have created his ultimate Prequel Masterpiece. It is by far and away my favorite of his three SW edits.

When L8wrtr began this journey, he set himself some very specific goals on how he was going to approach these edits — improved pacing, better, stronger characterization, removal of anything that did not serve the greater story — and there were times through the first two edits, I wondered where he was going? SHADOW OF THE SITH and THE REPUBLIC DIVIDED are great edits (you know how hard that is for me to say, being a Star Trek guy LOL!) but through both of them I always had the sense that something was “missing”, that the “payoff” was missing. While enjoyable, and vastly improved, the first two edits left me a bit unsatisfied…though I could not put the finger on it as to why?

Well, the PAYOFF is now here! In spades! And I am now completely satisfied.

L8wrtr has smartly recrafted REVENGE OF THE SITH into a logical, dark, tragic character drama. Most of the over the top action you expect in a Star Wars movie has been greatly trimmed or completely removed — the first 10 minutes of this edit is a perfect and wonderful example — keeping the story constantly moving forward and the focus on Anakin’s descent.

Anakin’s fall is portrayed much more organically and realistically in L8′s approach. He is a victim as much of his own anger/arrogance as he is of Palpatine’s manipulations. In fact, perhaps the most brilliant story change L8 has made is the reordering/editing of the Opera House scene. It is now much earlier in the film, and it creates any entirely new dynamic in all the scenes that follow — in particular his relationship with the Jedi Council — making Anakin’s eventual betrayal all that more believable and tragic.

L8 has made some interesting creative choices throughout the edit. For example, never showing the audience Anakin’s dark future visions, only letting us hear it. The first vision works perfectly for me. It felt spot on. The second one, while still works, feels somewhat forced. But this has far more to do with the source material that L8′s edit. As the one thing that never worked for me in the original ROS, and I still have some issue with in this scene in particular, is Anakin’s sudden flashes of hostility towards Obiwan. I understand the intent of the scene, and L8 has set up the fracture in the Anakin/Obiwan relationship far better than Lucas did, but it still plays very sudden…. but again, this is more to do with the actor’s performance than L8′s storytelling. And smartly, L8 moves away from it as quickly as possible. I rectify the scene in my mind but reminding myself Anakin is falling into the grasp of the Dark Side and his emotions are consuming him in a moment of weakness.

In fact, despite this one quip, L8wrtr’s editing of Hayden’s performance is stunning. Much like his work in THE REPUBLIC DIVIDED, L8 has been able to save and even improve Hayden’s portrayal of the future Sith Lord with tons of small trims and cuts, creating a much more confident and stronger performance. Well done!!!

If I had one other completely minor quip, it would be I missed the full on Yoda/Palpatine duel. L8 completely cut Yoda’s fight from THE REPUBLIC DIVIDED (which I believe I commented on that review) and his duel with the Sith Master has been significantly trimmed here. Being a non-SW guy, I never realized there was such a dislike of Master Yoda’s spinning frog fighting style. LOL! Oh well, L8wrtr’s solution to the conclusion of the duel works well considering what he had to work with.

There is so much about this edit that is wonderful work, and much of it is so subtle that I was not even aware of it until I watched the commentary. Of which, I can easily say this is one of the BEST COMMENTARIES I have ever listened to, better than most professional efforts. L8′s thoughts are articulate and insightful. His deep affection for the Star Wars Universe really shines through. It was a great joy to listen to.

The new ending sequence — the suiting up of Vader, birth to the Twins, getting everyone in place for Episode 4 — is absolutely beautiful. It may be my favorite sequence in the whole edit. It just ends everything on a very emotional note.

Though some set-up items do get ignored — R2D2 & 3PO memory erasing and Obiwan Force Ghost thing — though this probably for the best as they felt extremely shoehorned in the original version.

Upon reflection, L8wrtr was woven a wonderful single tapestry played out over 3 very well executed edits. He has made this Star Trekker look at the SW Universe in a new light and appreciate its wonders in new ways I had not considered.

Thank You L8 for a wonderful 3 year ride!

You should be proud.