Brief Synopsis:
This is the final installment of L8wrtr’s Star Wars Prequel Trilogy. Building on the improvements to characters, relationships and motivations made in his edits of Episodes I & II, Dawn of the Empire creates a subtle but more realistic and tragic fall from grace for Anakin. This edit provides a more comprehensive and emotionally charged conclusion to the Prequels in preparation for the Original Trilogy.
Intention:
Dawn of the Empire is the combination of multiple, complimentary goals. In the broadest terms my goal was to bring my fanedits of the Prequel Trilogy full circle, maintaining the same principles regarding dialog, pacing and removal of ineffective humor in order to create a tone throughout the PT that is more compatible with the Original Trilogy.

Second, I wanted to complete my correction of certain story elements which I felt were in conflict with the OT, particularly flying R2, the title of Darth, and of course the removal of midichlorians.

Lastly, and specific to this edit I wanted to strengthen the story of how Palpatine twists and manipulates Anakin into viewing the Jedi as dishonest, as well as fill out the story with the Birth of the Rebellion deleted scene.

Specific to the story of Episode III, my goal was to make Dawn of the Empire a more compelling, tragic and emotionally satisfying take on Revenge of the Sith. In bigger terms, it’s my hope that the totality of the L8wrtr PT will help enhance viewings of the OT by creating more engaging characters that the viewer can care about, so that the OT’s emotional strings have more weight and impact, particularly with the final chapter of Return of the Jedi. 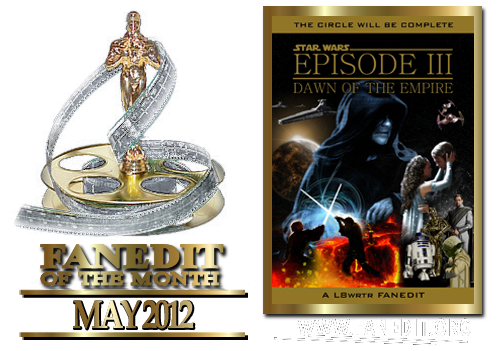 Special Thanks:
SPECIAL CONTRIBUTORS :
This edit would not have been possible but for specific contributions by the following:

Angel was crucial in providing 3 matte backgrounds critical to restructuring the initial confrontation between Yoda and Palpatine.
Q2 provided critical assistance in the workflow for upscaling the dvd deleted scenes.
njvc is responsible for the slick menus motion files, static menu images plus tons of further assistance.
Rogue-theX worked tirelessly on the cover art, thank you from the bottom of my heart Rogue, you are a true gentleman.

Additionally, two editors work served as inspiration and blue-prints for two specific scenes. Their original work deserves recognition:
Dark Force Rising by Kerr set the standard for the pivotal scene between Mace, Anakin and Palpatine.
Revenge of the Sith by Corgicar provided the inspiration of Obi-Wan’s fateful victory over Anakin.

Special Thanks:
Everyone at Fanedit.org who contributed to this to the in-the-works thread, you are too many to list year, but watch the credits! Your support and belief in this project were inspiring. 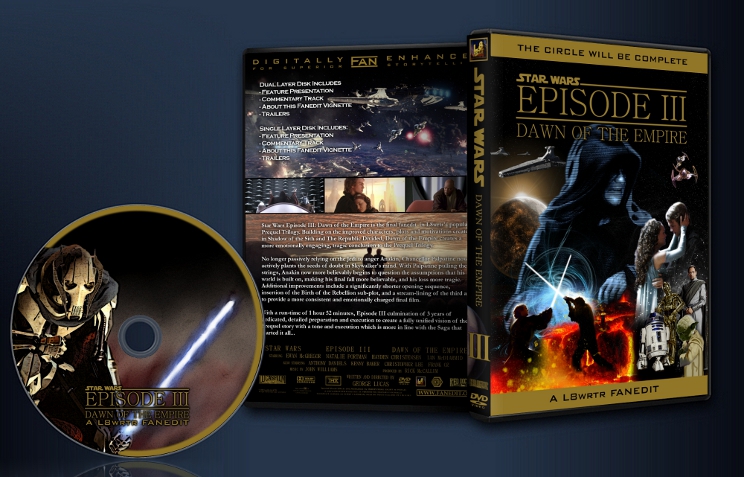 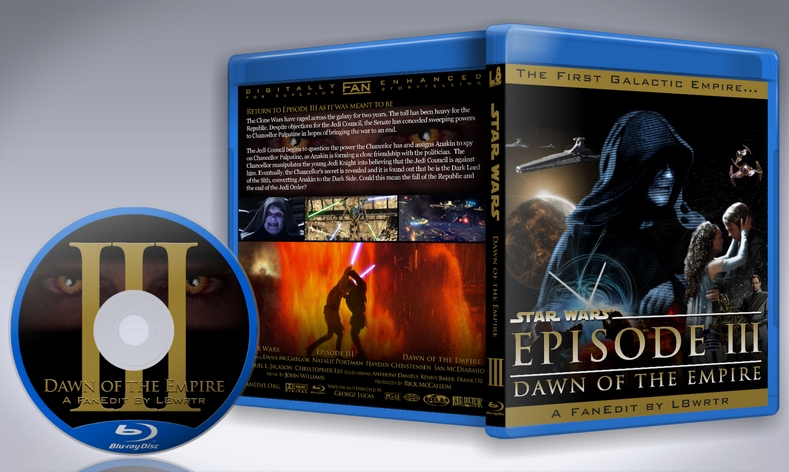 Do you recommend this edit?
Yes
Format Watched?
Digital
Y
yofluckz Top 500 Reviewer 23 reviews
Report this review Comments (0) | Was this review helpful? 0 0
July 20, 2017 (Updated: July 20, 2017)
Overall rating
7.5
Audio/Video Quality
8.0
Visual Editing
8.0
Audio Editing
8.0
Narrative
8.0
Enjoyment
7.0
L8wrtr's editing is the *cleanest* (least noticeable) of any ROTS I've seen, but in the end, I think the edit is not quite as good overall as the original cut of the film (*despite* the many welcome improvements).
(SPOILERS AHEAD)

The Ani-Obi-Dooku duel is excellent; unlike the original cut, you now really get the sense that Dooku simply *knows* that he'll be able to defeat the two Jedi the same way he did on Geonosis...what he didn't expect was how powerful Anakin would have become (especially when fueled by anger). L8wrtr's edits convey this much better; Anakin is in rage mode, beats Dooku, and simply cuts his head off and immediately regrets it (Palpatine's famous but silly "DEWIT" line is gone). This works much better because it fits with the instinct he has toward merciless revenge we saw in AOTC (as opposed to fairly silly urging by Palpatine). The edits here are perfect. Bravo, L8wrtr.

Unfortunately, The choice of putting the famous opera scene here is jarring, and simply doesn't work. I think I can appreciate L8wrtr's intention, but having Palpatine rescued by the Jedi and then two scenes later (literally overnight) telling Anakin that the Jedi are planning to betray him comes off as forced and silly. It also diminishes the context of their meeting... The day after the attack, Palpatine makes a request to the Jedi that Anakin should hang out with him at an opera for no reason? The original placement of the scene worked much better; here it's simply jarring.

In fact, L8wrtr's decisions in reshuffling the sequences regarding the Anakin-as-a-double-agent plot simply don't work and the narrative flow is less logical than in the original.

On the other hand, the inclusion of multiple deleted scenes with Padme, Bail Organa, and Mon Mothma is MOST welcome. This and L8wrtr's masterful editing of the opening sequences are the best overall changes of the edit.

There are many more subtle edits throughout the rest of the film that are for the better, including the Mace vs Palpatine duel and Anakin's submission to Palpatine.

On that note, L8wrtr's done a good job tweaking Palpatine's face change so that it now seems clear that his *true* form is revealed once Anakin slices off Windu's arm and he unleashes his "unlimited power."

My biggest problem with this film is something that L8wrtr unfortunately leaves in (while Lucas deserves full blame for the scene, it's disappointing that L8wrtr left it unchanged): Anakin murdering little Jedi kids, a scene that's ridiculous and utterly unbelievable (to the point of being laughable), not to mention absolutely unnecessary. The fact that Anakin helped kill Windu and is now leading an assault on the Jedi Temple is enough for the audience to know that he's become a villain. The scene where Bail watches clonetroopers kill a Jedi adolescent is enough to convey that ALL Jedi in the temple were killed (including kids). The fact that Anakin personally murders human children who trusted him makes all of his subsequent dialogue with Padme completely ridiculous: Later on, Padme learns that he's a child murderer and then says that she loves him and just wants his love....uh, lol?? If it weren't for that scene, everything that happens later would make perfect sense. Again, the scene's existence is Lucas' fault, but if I could only choose one scene to remove from the original cut, it would be this.

Speaking of which, we would be able to assume that once Anakin is in the Vader suit, he's capable of any and all evil if it weren't for the fact that L8wrtr inexplicably removed Palpatine telling Vader that Padme is dead. This (like some of the earlier reshuffling) simply breaks the film for me...because it leaves the audience absolutely unable to answer the question of why Vader wouldn't travel to the ends of the galaxy to find Padme unless he knew with certainty that she were dead. I can understand removing "NOOOOO (Do not want)," but I can't understand removing Vader's explicit understanding that Padme is dead.

That said, the throat crunch noises on Padme's neck, no more "I have the high ground" (seamlessly edited), no more "she's losing the will to live" BS...all very welcome changes.

Unfortunately, the last bunch of edits are problematic; I can't fathom why L8wrtr removed the conversation about separating the twins, that Luke has family on Tatooine, etc. Why was this removed? No reason whatsoever as far as I can tell. Instead, we're shown what feels like a much more random bunch of scenes that come out of nowhere with no explanation at all.

Yoda landing on Dagobah: Not needed, and should have remained the cutting room floor. We still get Obi-Wan's baby drop-off service; perhaps starting the scene where he's already with Beru and handing off Luke would make more sense (we could then assume that they'd already been talking for some time). Palpatine, Vader, and Tarkin with Death Star under construction: Completely unnecessary and (very) silly... Disappointing that this wasn't removed, but I don't fault L8wrtr for the scene's existence.

Ultimately, L8wrtr's version of any particular scene could be considered superior. The point is that the totality of L8wrtr's edits make for an experience which, despite welcome improvements in particular sequences, is simply not *quite* as logical in narrative progression and ultimately not quite as good as the original overall.

Do you recommend this edit?
No
Format Watched?
Blu-Ray
T
taurus Top 500 Reviewer 4 reviews
Report this review Comments (0) | Was this review helpful? 1 0
May 24, 2016
Overall rating
9.6
Audio/Video Quality
8.0
Visual Editing
10.0
Audio Editing
10.0
Narrative
9.0
Enjoyment
10.0
The current king of Star Wars Episode III: Revenge of the Sith edits. It's not perfect: both Hal9000 and Kerr have executed individual moments and scenes better, but this is the best edit overall. There's some weird compression during the scene where Obi-Wan confronts Anakin on Mustafar, and a few particular decisions that I have quibbles about but this is still my preferred version of Revenge of the Sith (a movie I do have an irrational fondness for). Can't wait for V2!

Do you recommend this edit?
Yes
Format Watched?
Blu-Ray
O
octoroxx Top 500 Reviewer 16 reviews
Report this review Comments (0) | Was this review helpful? 0 1
September 28, 2015
Overall rating
8.6
Audio/Video Quality
10.0
Visual Editing
10.0
Audio Editing
10.0
Narrative
8.0
Enjoyment
8.0
L8's ROTS edit is the go-to version of this movie, it addresses every problem fans had walking out of the theatre in 2005. Everything is very well done in this edit, and the fan-editor's commentary is definitely worth checking out. Although I still didn't find myself enjoying the movie very much, this is just my biased mindset. One thing that still bothered me though is that Padme still died at the end (not from a broken heart thank god) and this leaves a continuity error but still, well done!

Do you recommend this edit?
Yes
Format Watched?
AVCHD
S
smithers Top 100 Reviewer 29 reviews
Report this review Comments (0) | Was this review helpful? 0 1
September 02, 2015
Overall rating
9.2
Audio/Video Quality
7.0
Visual Editing
10.0
Audio Editing
10.0
Narrative
10.0
Enjoyment
9.0
This is an excellent edit, very well done.
There seemed to be some visual compression issues on the lava scenes, likely due to the MPEG-2 encoding (Y U NO use h.264?), but other than that the picture and sound quality are great.
Editing is very well done, trimming unnecessary bits and slight reorganization of scenes.
The extras are missing on the Blu-ray but are available on the DVD.