Doctor Who: School Reunion - A Fanedit

Brief Synopsis:
School Reunion is the perfect marriage of Classic and New Who, paving the way for the future mega-hit that was the Sarah Jane Adventures, and giving us emotional closure between The Doctor and the best of his companions (besides Ace) intrepid journalist Sarah Jane Smith.

Count me among the hopeless romantics who don’t feel the show loses a step if The Doctor gets involved romantically with a companion….provided it’s done right…which, frankly, it seldom ever is. It only works in retrospect, and many a time, it works with companions that the writers aren’t forcing into a relationship with the time lord. Donna, Jo, Sarah Jane, they’re remembered fondly in this way because they earned their closeness with The Doctor, because they either complimented him or took him to task, meaning well and looking out for him in the process. These companions were there for him as friends and equals first, and that’s what drew us to them, and it’s also what drew The Doctor to them in the end also.

So when Ten said goodbye to Sarah, I refused to accept he was putting him behind her, and the ongoing saga at the time vindicated that belief as they would meet several more time, with each instance we gained a little more insight into Sarah’s thoughts and feelings towards the man as she built a life without him. In my headcanon, long past the unfortunate end of SJA, a very much alive Sarah is visited upon one more time by The Doctor, revisiting the face of his tenth or seventh incarnation, and they elope, ultimately conceiving the young lady we see recruiting Kate Winslet and the lady off Ever Decreasing Circus against Nazi Eldritch and supercomputer Behemoth in Dark Season

Oh, wait, you’ve never heard of that? Google it, it can also be found on Youtube. If you still haven’t seen it, you haven’t been born yet.

Intention:
I decided after viewing Whoflix’s edit of School Reunion, I would do one myself, one that is more or less the same story, but with a different opening and ending attached. Trimming it down to 35 minutes
Release Information:
Digital
Editing Details:
We start the pre-titles with Sarah meeting The Doctor in the staff room, and the titles kick in after the scene where we first see the children hard at work on their computers putting together the Krillitane code.

From there, it’s the same story right up until Sarah visits the TARDIS, The Doctor asks if she likes to come…and in what makes the edit even more different is Sarah doesn’t say no, and if she was going to, she doesn’t get the chance as Mickey interrupts to ask if he can come with them. We cut around Mickey’s line of dialogue to avoid him saying “..And not with you”, and the episode ends with Ten agreeing to take Mickey the idiots on board..possibly with Sarah Jane too…it’s left ambiguous

Oh, and because we don’t end on the goodbye or the emotional embrace, that means there’s no pointless rebuilding of K9 to undermine his sacrifice towards the end…and people say Moffat had a liplock on that sort of thing. Pfft.
Cover art by Zarius (DOWNLOAD HERE) 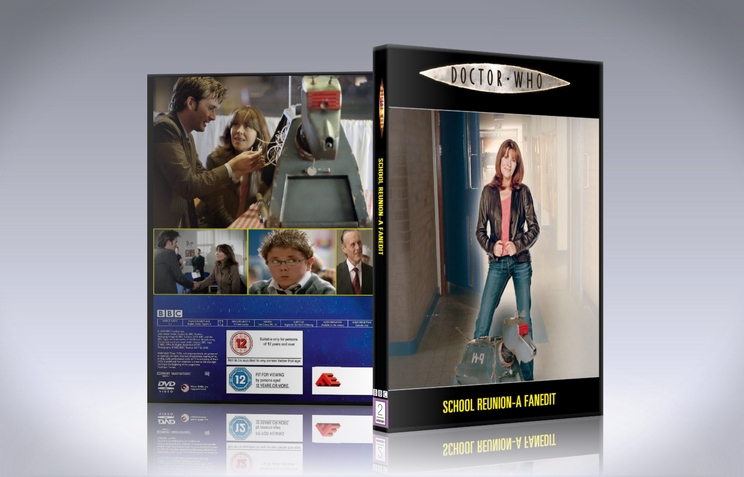