In this case, I needed video material to display at our Singani 63 event at Tales of the Cocktail in New Orleans this past July. The “theme” for the event was 60s European espionage films, so I choose the Harry Palmer series as my jumping off point, and began preparing for one of my now-patented, never-watched mash-ups. Again, this was designed to be visual wallpaper, with the idea if you crafted a good buzz and decided to focus on it exclusively, it would hold/reward your attention.

As much as I enjoy the early Bond films, I’m more drawn to Len Deighton’s Harry Palmer character, because Harry seems closer to my own capabilities and appearance, and also the three produced films are, in my opinion, markedly better directed than any Bond film until OHMSS (which I’ve written about on this site). In fact, I think you’ve got two directors doing their career-best work here, and one very talented director trying REALLY hard to make something interesting.

The three films in the series, THE IPCRESS FILE, FUNERAL IN BERLIN, and BILLION DOLLAR BRAIN, were produced by Harry Saltzman, one of the original Bond producers, and IPCRESS employs some key members of the early Bond creative team: production designer Ken Adam, editor Peter Hunt, and composer John Barry. The director was Sidney J. Furie, and if Sidney knew anything, he knew what a shot was, and that’s no small thing. He obviously studied his Orson Welles and Carol Reed (among others) very closely, as evidenced by the unending parade of low, high, and canted angles, all employed to consistently good effect. Like Reed but unlike Welles, he doesn’t go for lengthy, multi-destination shots; he likes to cut and cut often, though always with purpose—it’s an impressive piece, and my favorite of Furie’s films. Other elements of note: Otto Heller’s ultra high-contrast photography (with the key light typically hotter than “on” exposure), which is well-suited to the inherent graininess of the two-perf Techniscope process; Peter Hunt’s razor-sharp cutting; and Sue Lloyd’s wonderfully sly turn as Jean, a cynical colleague of Harry’s. Ms. Lloyd probably gives the best performance of any of the female leads in the series, not only because it’s the best-drawn character, but she’s also the best actress of the group (while I’m a fan of Francoise Dorleac--especially in Polanski’s CUL DE SAC--her character in BILLION DOLLAR BRAIN just isn’t as interesting to me as Sue Lloyd’s. Dorleac, who was Catherine Deneuve’s elder sister, would die in a car accident not long after wrapping BILLION DOLLAR BRAIN).

The second film, FUNERAL IN BERLIN, is a smart, solid Cold War defector/ spy swap tale, and Guy Hamilton’s anamorphic compositions and staging are bolder, cleaner, and more precise than in any of his other films. Other strong points include some amusing side characters (Hugh Burden in particular) and striking location work, while on the weak side I’d have to point out that the female lead and male co-lead performances are somewhat underwhelming. Konrad Elfers’ score is not to my taste, but its theme does have the makings of an earworm, like it or not.

BILLION DOLLAR BRAIN, directed by Ken Russell, is a truly frustrating film. Visually it’s an exciting movie to watch--I pulled all the great shots into the mash-up, and there are a LOT of them--but the terrible plot subsumes it all. The truly stunning exterior imagery and staging anticipate Russell’s famous, upcoming work, and if you can find any of the composer bios he made for the BBC prior to this, check them out; they’re unbelievably great.

So I’d place IPCRESS first because of its overall consistency and visual imagination, followed by FUNERAL IN BERLIN because of its solid narrative construction, and BILLION DOLLAR BRAIN a not-TOO-distant third solely because of Russell’s shot-making abilities.

According to Wikipedia, a fourth film was planned but never produced, and in the mid-90s Michael Caine reprised his role as Harry Palmer in BULLET TO BEIJING and MIDNIGHT IN ST. PETERSBURG, neither of which I’ve seen.

As for the Flying Lotus soundtrack, if you’re not into him, well, I feel bad for you. 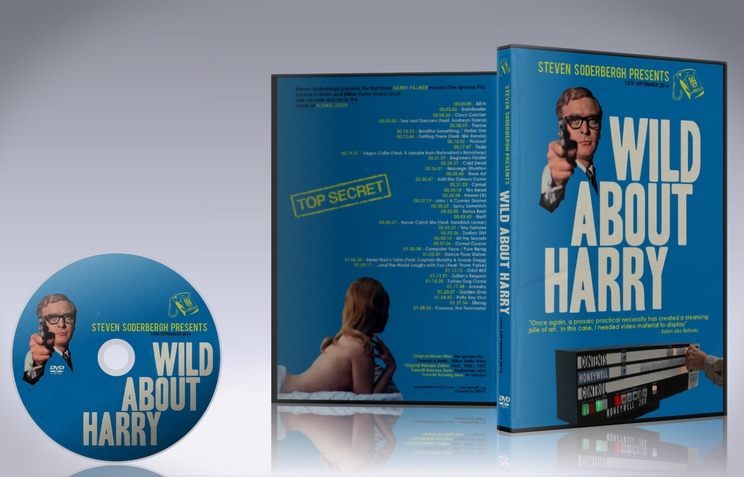 Video - MPEG 4, 1280 X 720p. Split screens are a constant, sometimes horizontally, others vertically. There is no invention with them, however. Apparently Mr Soderbergh has missed out on one Quentin Tarentino. Perhaps he has not viewed “Pulp Empire” by njvc. Blacks are not as solid as they should be, and the overall image is soft.

Audio - 2 Channel AAC, 256 kbps. Original audio (dialogue and music) replaced with Muzak by Flying Lotus. The music rarely syncs with onscreen action, but the editor feels the music is cool. If you don’t agree, then he feels sorry for you. The music, for a museum gala or cocktail party, is adequate. Home viewers might turn it off altogether with no loss. Or air a sporting event - or a religious station.

Narrative - There is no narrative. This is - more or less - an art installation, using someone else’s art. The faneditor chose not to use his own films. Curious. Anyway, art installations don’t have to be logical, or show narratives, or even make sense. They are ART.

Enjoyment - Mixed bag for me. Interesting to watch a once-talented director muck around in the fanedit sub-culture. He has not advanced very far in skill or technique. Indeed, this reviewer has a sly suspicion he is getting a free pass because of his name. Had this been submitted by an unknown novice, I imagine it would still be pending approval.

Worth the casual viewer’s time? Definitely not. How about fans of the original Harry Palmer movies? I dunno, how about mashing a trio of 007 films with nonstop Country & Western music? Wait a sec! Maybe fans of faneditor Steven Soderbergh will appreciate this. Course, these are not really his films, are they?

For fans of cultural unicorns and unclothed emperors.

Do you recommend this edit?
No
Format Watched?
Digital
V
vultural Top 10 Reviewer 184 reviews
Report this review Comments (1) | Was this review helpful? 0 1
October 05, 2016 (Updated: October 05, 2016)
Overall rating
7.3
Audio/Video Quality
9.0
Visual Editing
10.0
Audio Editing
7.0
Narrative
6.0
Enjoyment
7.0
As “visual wallpaper,” as Soderbergh describes it, this edit works pretty darn well. A glance here, a half-minute of eyeball attention there, along with the hypno-lounge soundtrack, make for an excellent movies-cum-music video experience. The music is hip enough and mellow enough to serve as a backing track for almost whatever you’re doing, whether you look at the screen or not. And I’m grateful to have discovered groovy new pieces: “Camel” and “Elephant Ride” by Flying Lotus.

The oft-used split-screen presentation oozes style and provides plenty to ogle. The visual editing on display is gorgeous to behold but would have been far less remarkable without the original films’ visual composition.

Not being familiar with the Harry Palmer series, I don’t think I could follow the story all that well—nor do I think I was meant to. There’s no audible dialogue, after all.

If the new audio were to be appreciated as a deliberate rescoring rather than a music video paste (it’s assuredly the latter, but let’s consider for a moment the former), it would fall a bit short in that regard. Cool as the music is, the musical tone and the visuals don’t always align. When the music does generally fit a scene, it often doesn’t start or end quite where it should, such as upon or near a scene change. And as delightfully as the music sometimes reaches you, there are a few songs that really don’t fit and took me out of the zone. Nitpick: There are a few noticeable pauses in the music, and I think the edit would have been better served without them. . . or with much shorter pauses.

Still, this is a pretty cool edit, because spy stuff (and babes). I had fun checking out the ‘60s aesthetics—the clothing, the tech, the hairdos, the furniture—and chilling to the tunes.

Here on IFDB, there’s an excellent book-like cover by TM2YC, who also appears to have put in some effort to list the Flying Lotus tracks used in the edit. Thanks, TM2YC, for keeping us up to date on Soderbergh’s fanedit doings and making it easier to check out eeenteresting music.
S
ssj Top 50 Reviewer 86 reviews
Report this review Comments (0) | Was this review helpful? 0 0