Brief Synopsis:
There are some fleeting moments in Warcraft (2016) that demonstrate that it could have been not only the film to finally break the video game-to-film adaptation curse, but that it could have stood shoulder to shoulder with the best of fantasy movies. Sadly, these moments are lost in a script with poor dialog, a meaningless second act, and characters that have inconsistent motivations.
Intention:
The purpose of making this edit is to minimize the damage done primarily in the second act of the movie. This includes, but is not limited to, eliminating the Garona/Lothar romance, the Alodi subplot, and bad line reads from the beginning to the end. With any luck, this will satisfy fans as a worthy substitute for the original for which they don&#039;t feel like they have to apologize.
Other Sources:
Warcraft Original Motion Picture Soundtrack
World of Warcraft Original Soundtrack
Special Thanks:
thecuddlyninja, theryaney and zamros.
Release Information:
Special Features
- MP4 and BD contain Fan Edit Commentary Track
- 15m Comparison Video between scenes from the Original and the Fan Edit
- Download Includes 3 BD Cover Art Variations - Horde, Alliance, and Mix
Editing Details:
- Adobe Premier Pro CS 6
- DVD Architect Pro 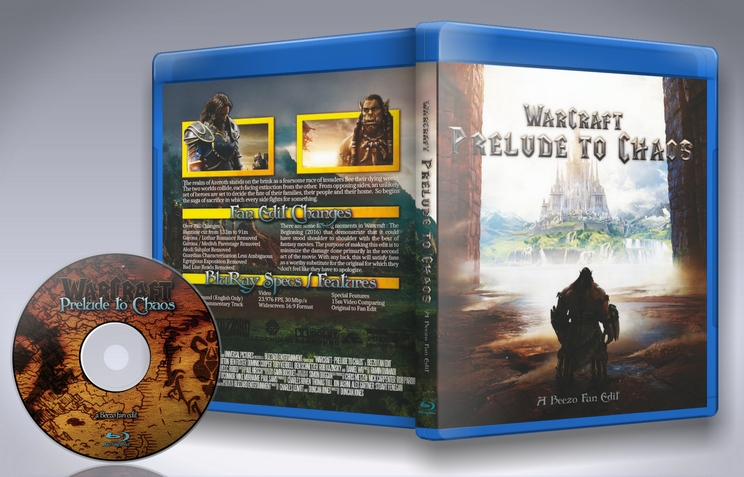 Do you recommend this edit?
Yes
Format Watched?
Digital
F
flounder Top 10 Reviewer 160 reviews
Report this review Comments (0) | Was this review helpful? 0 0
September 21, 2017
Overall rating
10.0
Audio/Video Quality
10.0
Visual Editing
10.0
Audio Editing
10.0
Narrative
10.0
Enjoyment
10.0
this edit was a vast improvement on the original movie,BEEZO has been able to trim out the awkwark scenes and un-neccesary humour making it now more of a action driven movie .the scenes explaining the lore and the magic have been shortened and are now sharp and to the point.now you dont have to be a video gamer to enjoy this movie now the whole family can.picture quality is superb.

Thank you for such a positive review! I'm glad you enjoyed it!

G
gary2129 Top 500 Reviewer 15 reviews
Report this review Comments (0) | Was this review helpful? 0 0
September 06, 2017
Overall rating
8.3
Audio/Video Quality
9.0
Visual Editing
9.0
Audio Editing
9.0
Narrative
8.0
Enjoyment
8.0
This edit does improve the movie a lot. It moves faster and feels more coherent, partly because related events happen closer to each other and don't have tons of filler, like scenes with unfunny humour and needless exposition, inbetween. Beezo manages to cut nearly all of the slack, which makes the movie that much more watchable and allows the parts of the movie that are actually great (imho everything with Durotan and Gul'dan) to breathe. It also removes some confusion I had regarding Anduins son while being in the cinema, of who I thought was the Kings son until he died.

Especially congratulation for the work done on the first and third act. The third act is actually very exciting now that most of the action happens simultaneously, and Durotans sacrifice makes much more sense if it's closer to the Kings sacrifice and the refusal of the orcs to kill Anduin after he won his duel. That way, it actually feels as if he moved something important in the hearts of his people, even if Gul'dan remains largely in control.

I liked Beezo'S version a lot more than the cinematic one and would encourage viewers put off by bad reviews who haven't seen the movie to check this version out, and of course everyone who is a fan and/or has already watched it to give it another go. Great work and thanks for sharing it with us, Beezo!

I would like to add a few points of criticism that remained for me, though the overall enjoyment of the movie was still high. If you want to watch the movie with fresh eyes, skip these and make up your own mind ;-)

- I think that the scene where the Orcs discuss the Fel would help to establish that plotline and give the character of Blackhand more depth, specially for when he is forced to take the Fel in the end. I think that a viewer can get the different attitudes of the Orcs towards the Fel by the indirect way the other scenes convey them, but I think it's needlessly potentially confusing without the scene. However, I also don't see a way to include it before they go through the portal without seriously disturbing the pacing of the great intro. Couldn't it maybe work once they are camping in Azeroth? Or is it un-cut-ably obvious that the scene is set on Draenor?

- Medivhs storyline feels a bit rushed. While most of it isn't very entertaining and thus I'm glad that it's cut, I wonder if it would be possible to give more of a feeling for his slow shift. I think a scene between his discovery of the Fel and his next appearance is needed where he actually gets in contact with the Fel would help to establish his contamination. Don't know if there is something salvageable in that direction in the movie. And wasn't it originally established at the beginning, and not in the middle, of the end-fight that he doesn't attack them immediately until provoked because he is concentrated on the incantation?

- I would have preferred the scene with Thrall on the river to be put behind Anduins coronation as the last scene of the movie, not behind the credits. It nicely mirrors the human leaders ascent and establishment and would make for a fitting final shot for the Prelude to Chaos. It gets lost after the very long credits.

- Another little thing that bothered me: Doomhammers betrayal comes pretty much out of nowhere. A little scene where Durotan explains his plan and Doomhammer shows at least a bit of doubt or argues with him would help to set up that turn of events. As it is, one has to retroactively think that Durotans best friend betrayed him, reasons unknown, and placed the green orcs in the valley.

Regarding the Orcs discussing the Fel, there really isn't a place to insert that after the Orcs make it to Azeroth. Orcs raid Westfall, the guardian is summoned, they fight in Elwynn Forest, Blackhand loses his hand. You can't have the scene after Blackhand loses his hand. So, there's really no other place for it other than before opening the gate, which leads to a litany of other problems.

Regarding Medivh, there is no scene in which he makes contact with the Fel. I know the movie skirts this idea that Medivh gets contaminated, but this actually isn't the case. Medivh is controlled by the demon at birth, and goes into a trance-like state when the demon takes over, forgetting everything he's done during that time. He was always "evil", so to speak, and never changes on account of interacting with the Fel. That's why there's no such scene that has this. Medivh is the most troublesome character whose motivations are so inconsistent that it makes him nearly impossible to fix.

Regarding Thrall's discovery, the reason why he's at the end of the credits is two-fold. One, I used different end-credits music, which requires removing the first section of the credits with the animation - after which is where the Thrall discovery scene is in the original. However, without that animated sequence, there was no natural place to break up the credits. Moreover, the Thrall scene is loaded with VO, which has been removed in my edit. I felt further distancing it from the film would make more sense.

And, regarding Doomhammer's betrayal, there is nothing I've removed nor can I add to make it less "out of nowhere." I do include the scene where he admits it was wrong to Durotan, but there's no other material with which to change this. What's in my edit is what is in the original.

Thank you so much for taking the time watch and review my edit!