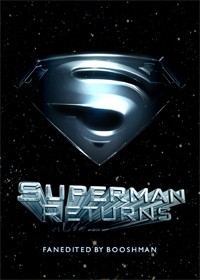 The Bionic Man and the Man of Steel are my two favorite heroes of all time. From childhood to this very day, so many, many years later, these characters continue to inspire and entertain me. Whether it be George Reeves, Tom Welling, Gerard Christopher or Chris Reeve, the Superman of the Silver Screen (both big and small) have always held a special fondness in my heart.

So after what felt like untold ages, that Bryan “The X-Man” Singer announced he was helming a new Superman movie, I was a giddy and delirious fanboy, on the verge of a nerdgasm! It sounded like the perfect combination in my mind. All the buzz and press and interviews before the release of the movie clearly displayed Singer’s devotion to Superman, particularly to the original Donner film. So I went into the theatres on opening night, feeling secure and assured that I was about to watch the greatest super hero movie ever.

Two hours later, not feeling quite so satisfied.

Don’t get me wrong. I actually like Superman Returns very, very much. It is a movie with much warmth and heart. But it is also a very flawed movie. Singer’s love for Donner is evident, and that is the film’s greatest weakness. Too much homage, and not enough fresh, original story. There are many great moments in this movie, but many missteps too, along with poor casting choices and poor pacing, over shadow many of these moments.

Up until now, my preferred viewing experience for Superman Returns has been ADM’s fan edit. It is a wonderful and fun edit that removes most of the original’s weaknesses and fortifies it strengths. I still highly recommend it.

But now, we have a new fan edit of Superman Returns, by Booshman, and I am overjoyed to report it is a delightfully entertaining experience.

First off, it has a great but simple colour menu design with icon Superman imagery. Great work!

Secondly, this edit looks FANTASTIC!!! The recolouring of the film is great and no where does it stand out more than when Superman appears on screen. The primary colours are so rich, they just POP off the screen! I love it! Beautiful and brilliant work! Booshman should be congratulated for this accomplishment. My hat off to you good sir!

Thirdly, the editing is very good. Many complain that the original Superman Returns moves too slow, particularly on repeated viewings. Well, no fear of that here. This edit moves along at a much stronger pace, getting to return of the Man of Tomorrow much sooner.

Most of the audio and cuts are well executed. There are a couple spots where it “feels” edited to me, as though the beat of the moment has been interrupted (Clark thanking Perry for his job, Clark popping into Perry’s office on ‘…it’s a bird…’), but this may be due to my over familiarity with the material.

The new opening and the Return to Krypton sequence is wonderfully executed. I LOVED seeing this deleted scene reincorporated. If I had to nitpick this sequence, I am not sure I would have had Kal-el’s ship arriving immediately after the Jor-el voice over/planet explosion. As there is no sense of lapse of time. Maybe Jor-el voice over, then title card, then Clark’s arrival. Actually, if Jor-el’s exposition was not set up for the end of the movie, I would have said just cut it all together. But as I said, this is minor nitpicking.

This is a great edit, this new cut works very well, but for me this movie may be a tiny bit over edited. There are a couple moments I wish had remained because I think they add more weight to Kal-el’s character. In particular, I wish ALL the Smallville stuff had remained, as they give us greater insight to the “real” Clark and it also sets up Jason’s allergies later. I also wish Boosh had kept Clark’s reaction/questions about Lex Luther being released from prison. It one of the rare moments where we see the Last Son of Krypton’s human anger side emerge, however briefly.

But otherwise, I agree with all the cuts Booshman made — no dying rich lady, no toy train, no peeping tom superman, less unlikeable Lois, a more sinister Lex — all greatly improve the story and the entertainment value.

This is a SUPER FAN EDIT and I highly recommend it to all my fellow Kryptonians!

Thank you Booshman for a fun evening at the movies!