changes for the DVD:

– Cut Pippin’s smile on the balcony
– The Paths of the Dead sequence has been extended slightly
– Cut Faramir and co. letting some of the orcs run past them
– The transition between the two parts of the Osgiliath battle has been changed
– Shortened Gothmog’s dialogue before Grond is brought forth
– Cut shots of women and children after the city has been breached
– Removed the Merry/Eowyn scene before the Rohirrim’s arrival
– The Battle of the Pelennor Fields has been recut
– Cut the King of the Dead’s line “Release us!” 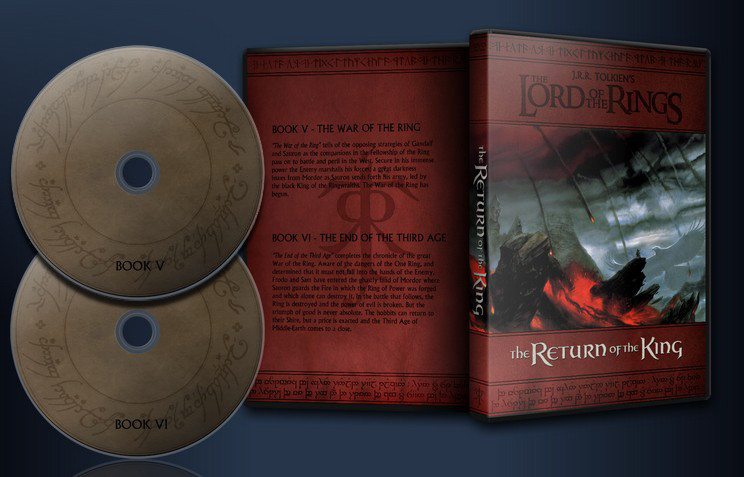 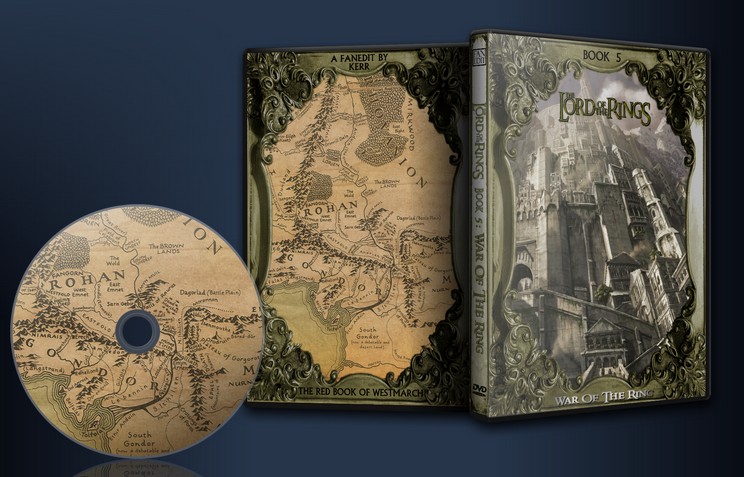 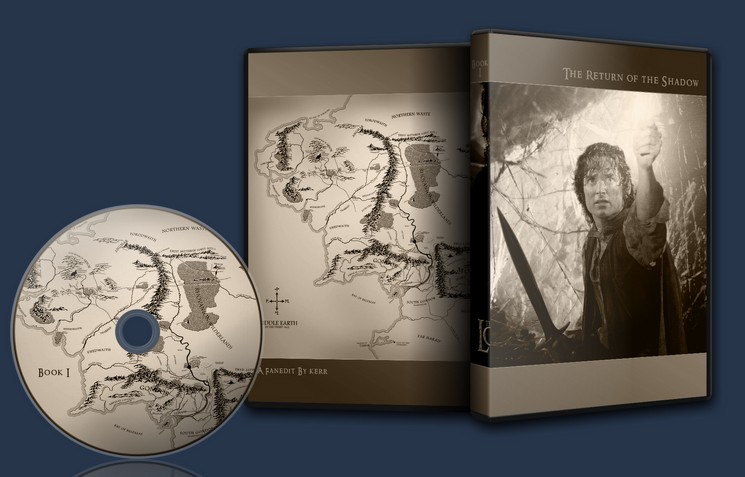 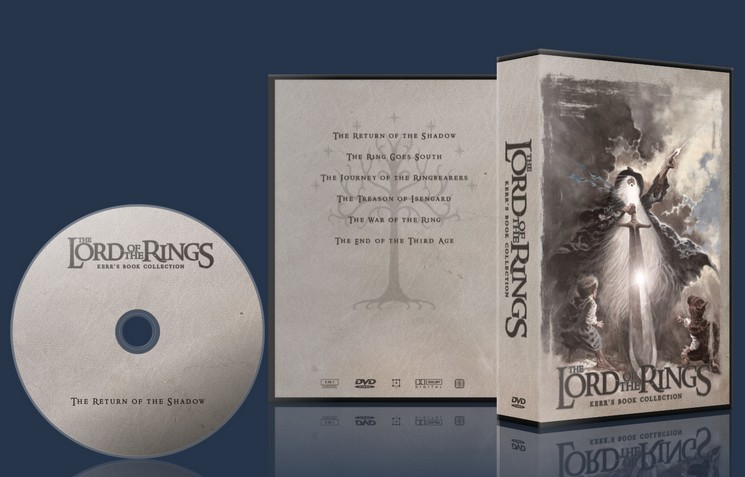 31 reviews
9-10 stars
81%
7-9 stars
13%
5-7 stars
6%
3-5 stars
0%
1-3 stars
0%
Overall rating
9.4
Audio/Video Quality
8.4(5)
Visual Editing
9.8(5)
Audio Editing
10.0(5)
Narrative
9.6(5)
Enjoyment
9.3(31)
View all user reviews View most helpful
October 17, 2022
Overall rating
9.3
Audio/Video Quality
5.0
Visual Editing
10.0
Audio Editing
10.0
Narrative
9.0
Enjoyment
10.0
--This review is about all six books, not only about this one--
So, I finally got to see Kerr's vision here. In total, it's about 7 1/2 hours long and therefore around 1/3 shorter than the extended editions.
That said, I don't think the pacing of this "Red Book" series is too fast, but the events told sometimes (really only sometimes, like the fellowship's voyage from Rivendell to Moriah, Frodo's encounter with Faramir or Aragorn's meeting in the path of the dead) feel a bit rushed - but that might also be just because I knew what's been cut out...
What I like about Kerr's approach is that his Middle-Earth landscapes feel bigger, more epic and more fitting to the story - yes, even though Jackson always gos for bigger, I really always thought the movies felt small regarding the landscapes! So wonderfully, Kerr achieves to let LOTR happen in more adequate geographic surroundings. This and his use of alternative music (besides of course the well-known various themes of LOTR) give his edit a more mythical and awestruck quality.
What I do not like is (and yes, I know it's this edit's trademark) - or put better, what didn't work too well for me was Kerr's approach to tell the several story lines each by itself and without switching from one to the other.
I mean, it's okay and one might like it, but imo it's one of the original book's strenghts and tricks to achieve a certain grandeur that gets lost when ignored.
Now for the cutting itself, I think it's rather flawless - Kerr is successfull in keeping in all significant highlights in all their glory and removing much of what could be considered lenghty, inadequately blown-up or simply unnecessary. He also changes the placement of backstories (or puts them back in the original book's order) in convincing style, meaning Peter's changes for the better of the movies themselves are all "corrected", and still Kerr's cut is not suffering from that, which is quite an achievement!
All in all, his LOTR feels more serious, more mature - but then again, I must admit I haven't seen the original Extended Editions for years, maybe these are not as overloaded as I remember them?
I also want to add that I saw Kerr's edit in compressed DVD resolution which just looks not too good on today's HD TVs.
I definitely can recommend this edit, and it was a joy to watch, but it won't be my go-to-version.

Do you recommend this edit?
Yes
Format Watched?
DVD
M
mighell Top 500 Reviewer 10 reviews
Report this review Comments (0) | Was this review helpful? 0 0
March 29, 2021
Overall rating
9.6
Audio/Video Quality
9.0
Visual Editing
9.0
Audio Editing
10.0
Narrative
9.0
Enjoyment
10.0
I liked how this cut removed a lot of unneeded silliness and side plots. All the characters were improved. Denethor felt less insane up until he thought Faramir was dead--then it makes more sense to lose his mind to despair. Reducing the intercuts and just following each group's experience helps.

My biggest quibble with the whole series is the reworking of the Siege of Minia Tirith & Battle of Pelennor Fields. Unfortunately, putting things back into book order and working with the material available caused continuity issues with day & night. Jumping back and forth was a bit jarring, but there was only the footage available to work with.

The choice of intro music was unexpected and I liked not just re-using the same piece as would be the obvious decision.

Do you recommend this edit?
Yes
Format Watched?
Digital
R
racerx1969 Top 100 Reviewer 32 reviews
Report this review Comments (0) | Was this review helpful? 0 0
September 13, 2019
Overall rating
10.0
Audio/Video Quality
10.0
Visual Editing
10.0
Audio Editing
10.0
Narrative
10.0
Enjoyment
10.0
I can only give this fanedit a perfect review since I just truly loove this version of LOTR so much more than the original cut / edit (both theatrical and EE). To me all of Kerr's 6 books are a masterpeace. Only thing distracting is that, as far as I know, there is no HD-version of it available, so when watching the Hobbit fanedit beforehand, the quality difference is noticable. Let's hope an HD version comes out someday. This will be the version I will watch from now on if I watch the LOTR. Thank you Kerr for the work you put in!

Do you recommend this edit?
Yes
Format Watched?
DVD
G
gunpowder Top 100 Reviewer 38 reviews
Report this review Comments (0) | Was this review helpful? 1 0
June 10, 2018
Overall rating
9.9
Audio/Video Quality
9.0
Visual Editing
10.0
Audio Editing
10.0
Narrative
10.0
Enjoyment
10.0
Splendid and meticulous editing, as usual. The entire cut list seems reasonable and nothing felt missing. As close to the book as it gets, with the material available. Masterful works, these book edits.

Do you recommend this edit?
Yes
Format Watched?
Digital
M
mrbadcrumble Top 100 Reviewer 47 reviews
Report this review Comments (0) | Was this review helpful? 0 0
April 27, 2014
Overall rating
9.9
Audio/Video Quality
9.0
Visual Editing
10.0
Audio Editing
10.0
Narrative
10.0
Enjoyment
10.0
I loved these. Not to much to say about it that hasn't been said by other reviewers, but if you're a Lord of the Rings fan, check these edits out.

(Watched this a couple years and forgot to review.)