Hobbit: The Desolation of Smaug - Entirely Respectable Edition, The

Brief Synopsis:
The 'Entirely Respectable Editions' seek to remove all material that is silly, overplayed, misjudged, overly comical, ridiculous and generally inconsistent with the more serious tone established in the earlier 'Lord of the Rings' Trilogy. It is not a radical restructure, or a two-film cut and does not set out to streamline narrative, quicken pacing, or remove characters and plot-threads. The more time we spend in Middle Earth the better, I just want Middle Earth to be a more sensible place while we're there.
Intention:
I was kind of glad Guillermo del Toro didn't get to Direct because as much as I love his movies, he was never going to make films that were tonally and stylistically consistent with the LoTR series... unfortunately neither did Peter Jackson. The serious, grand and relatively realistic tone of LoTR, was mixed with a new more childish, silly, comic and overblown style. Thankfully there is enough good material that a Fanedit should be able to fix everything.
Additional Notes:
"I've noticed a tendency for The Hobbit Trilogy to get rather silly. Now I'll do my best to keep things moving along but I'm not having things getting silly. The first two films got very silly indeed and that last one about the armies was even sillier. Now, nobody likes a good laugh more than I do, except perhaps my wife and some of her friends. Oh yes, and Captain Johnson. Come to think of it, most people like a good laugh more than I do, but that's beside the point. Now, let's have a good, clean, healthy Tolkien film. Get some air into your lungs. Ten, nine, eight and all that".
Other Sources:
- The Hobbit: The Desolation of Smaug (Extended Edition Blu-Ray)
- The Hobbit: The Desolation of Smaug (Special Edition Soundtrack)
- The Hobbit: The Battle of the Five Armies (Extended Edition Blu-Ray)
- The Lord of the Rings: The Fellowship of the Ring (Extended Edition Blu-Ray)
- On Her Majesty's Secret Service (Blu-Ray)
- THX 1138: Special Edition (Blu-Ray)
- freesound.org (Various SoundFX) 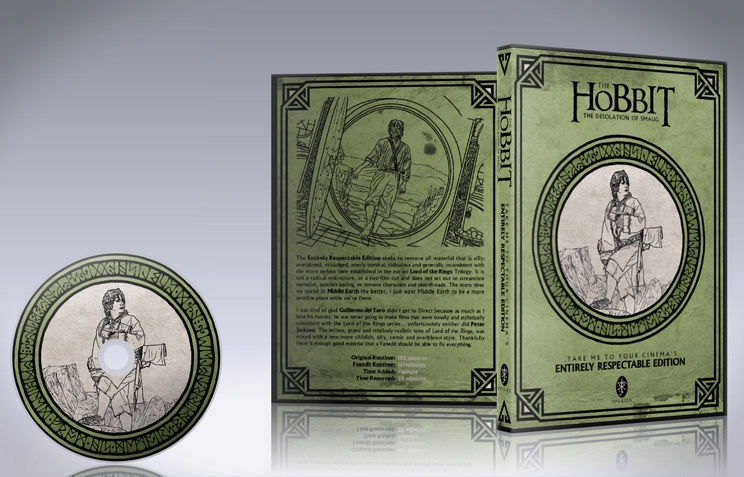 If you enjoyed the original DOS but want a version that cuts out the biggest offenders as far as SILLINESS goes, with a slight restructuring of the Dol Guldur sequence to pace it out better (all of that is moved to the start of BofA), then you should definitely check this edit out!
Below is a slightly critical-sounding section but I assure you, TM2YC did an excellent job here and achieved his goal of removing most of the silliness. It has just become difficult to watch certain scenes in these films due to preference and the absurd number of times I have seen them.

Know that I have given my scoring a great deal of thought, and my little rant below is not directed towards TM2YC as an editor. I think the work they did here was excellent. My gripes are with the original films and those gripes don't extend beyond the "Enjoyment" category.


I have a rather difficult time docking points in my reviews just because I didn’t enjoy certain parts of the originals, but I have done so in the past (Wraith’s edit: Split Unbreakable Glass, for example) because….that’s the entire point of the “Enjoyment” section as a whole, right? I was reading a thread just today about the potential of removing (or reducing?) the weight on this section, and personally I think it’s a good idea.
I mention this here because I feel AUJ was pretty objectively the best film. Some people will argue that DOS was better; just know that I strongly disagree, despite how great Bilbo v Smaug is (I’ll save you the rant) Now, TM2YC set out to make this film “Entirely Respectable” and while I feel that he has definitely done so (in another seamless and flawless fashion, mind you), TM2YC was fairly light with the macro-cutting (a heavier hand here than in AUJ) and that means there were a lot of sequences left in that may indeed be Entirely Respectable, but I have a very hard time watching due to my own personal preferences (Bard vs Alfrid and the Master isn’t the worst thing in the world, but I don’t like it at all really. Tauriel/Legolas/Kili’s plot however, IS the worst thing in the world lol)

Anyway, I’ll move on to my more organic play-by-play review style that I have come to prefer doing, with a small wrap-up afterwards:
(this one is slightly less involved than my review of AUJ, I didn't check the cut list as frequently this time and I just wasn't as active with the keyboard mashing)


You cut out PJ’s cameo how dare you!

7:45 you zoomed in and panned up to remove the caption “2 weeks later” or whatever. Genius. Couldn’t get this to work out and look natural myself. Well done brother.

Cutting Bombur from bouncing off the door, seamless!

God I just hate Tauriel Kili and Legolas’s side plot so much. I’ll spare you any further monologues

1:03:38 I noticed a music transition but it was pretty minor, and I didn’t notice any of the other MANY cuts you made to this sequence (Barrels out of bond). So, not really an issue.

I’ll never get tired of hearing “One of NINE” despite not really liking the High Fells plot, cutting out this plot and putting it in BotFA from this point on was a solid move

The entire side-plot of Bard vs Alfrid and the Master is still here, and I don’t actually think it detracts from the narrative TOO much. It takes us away from Thorin & Co., but it prevents Bard from being a Deus Ex Machina like he was in the book. I think it could have stood for some more trimming, but I’m not sure it detracts from the “Entirely Respectable” bit either, as you cut out the worst of all the scenes: the goat balls! (like, seriously PJ? I know this one was actually on you, I watched the appendices. WHY?)

Loved the rescore with Misty Mountains at 1:43ish!!

The whole side plot with Fili, Kili, Bard and his kids isn’t my favorite either but it’s not bad, nor silly per se. So, carry on.

I can respect what you did with using Smaug’s fire breath as a way to get away from Bilbo at the opportune moment!

2:16:08 the “REVENGE” bit was kinda weird, but I appreciated your color re-grade, followed by the transition to BotFA by laying the intro music over the top of “I am fire I am death”

Interesting rearrangement of Smaug’s death sequence, and then MAJOR props for ending with a really cool and original final shot!


In closing, this edit was done very well, and there wasn't anything that jumped out at me or any cuts that I thought detracted from the overall quality of the edit. There were a few very minor hiccups but I only really noticed them because I've seen the Hobbit movies *checks notes* a lot of times and it's beyond second nature to notice that kind of thing at this point. And even then it's usually more like a "Oh nice I see that cut you made here! I hadn't thought of that!" rather than a complaint. Anyway, great stuff here TM2YC, I'll definitely be checking out your rendition of The Battle of the Five Armies and letting you know my thoughts! Keep up the good work.